Singapore startups to step up 2018 fund-raising for global expansion: KPMG

For 2017, Republic chalked up US$1.2b in VC deals; worldwide, the figure hit 10-year high of US$155b
Jacquelyn Cheokbtnews@sph.com.sg
Singapore startups are likely to step up their canvassing for venture capital (VC) funding in 2018 for regional and global expansion.
PHOTO: ST FILE

SINGAPORE startups are likely to step up their canvassing for venture capital (VC) funding in 2018 for regional and global expansion.

This comes as many startups have in the last few years raised seed money and early VC rounds to build their propositions predominantly for the Singapore market, or as a prototype for larger rollouts, said Chia Tek Yew, head of financial services advisory at KPMG Singapore.

Mr Chia told The Business Times: "In 2018, these companies are going to seek more aggressive funding for expansion into the rest of Asean and also into the larger markets of China, Japan and the West (the US, UK and continental Europe)."

Such funding sizes are usually larger and geared towards "market access and client acquisition".

Mr Chia also projected that in this coming year, Singapore will see the launch of more early-stage (seed and Series A) corporate VC funds, as well as the regrouping of VC funds to focus on later-stage (Series B to D) deals.

"Late-stage transactions will continue, with investors placing larger but safer bets on companies with proven business models and the strongest path to profitability."

In the fourth quarter of 2017, Singapore recorded 17 VC deals totalling US$205 million, 57.2 per cent higher from a year ago. The report also found that even as deal volume fell by 41.4 per cent from the previous quarter, deal value was up by nearly 40 per cent.

For the whole of 2017, Singapore saw 112 deals totalling US$1.2 billion. The second quarter of 2017 was the strongest performing quarter with US$724.3 million invested across 33 deals. Last year, there were eight exits which yielded US$1.6 billion in total, and seven funds which collectively raised US$732.9 million. 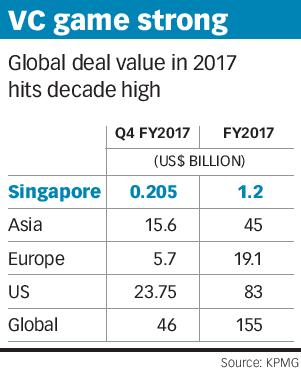 These numbers reflect "strong investment appetite and good return-on-investments that will continue to fuel the growth of the Singapore ecosystem", said Mr Chia.

In Asia, VC investments reached an annual high of over US$48 billion in 2017, of which US$13.9 billion came from China. The three largest deals in China were in electric car company Nio (US$1 billion), ridesharing company Didi Chuxing and online retail services provider Meituan-Dianping (US$4 billion each).

Globally, total VC investments hit a decade high of US$155 billion in 2017, led by deals in the US which soared past the US$83 billion mark, making it the strongest year of VC investment for the country ever.

Notably, a common trend across regions last year is that despite higher deal values, deal volumes plummeted as investors focused on placing bigger bets on a smaller number of companies.

In the next few quarters, cross-industry solutions will become a key focus of VC investments globally, the report found.

Mr Chia said: "The applicability of innovative technologies - whether artificial intelligence and machine learning or blockchain - to different sectors will likely keep investors focused and investment high regardless of any pauses among specific industries.

"The tech sector will also continue to take a lion's share of overall investments."

THE following companies saw new developments that may affect trading of their securities on Friday:

[SYDNEY] Australia on Friday said it would simplify bank lending rules to free up credit in a bid to stimulate the...