Public transport fares to be 4.2% lower from Dec 30

Move is driven by lower energy costs and will cut fare revenue for LTA, SMRT and SBS Transit by S$79m a year
Nisha Ramchandaninishar@sph.com.sg@Nisha_BT
Underpinned by lower energy costs, commuter fares will come down from Dec 30 in a move that translates to a combined reduction of about S$79 million a year in fare revenue for the Land Transport Authority (LTA), SMRT and SBS Transit.
ST PHOTO

How fares stack up in major cities

UNDERPINNED by lower energy costs, commuter fares will come down from Dec 30 in a move that translates to a combined reduction of about S$79 million a year in fare revenue for the Land Transport Authority (LTA), SMRT and SBS Transit.

In its annual fare review, the Public Transport Council (PTC) announced on Thursday that a total of 5.7 per cent in reductions would be afforded to commuters, of which 4.2 per cent will kick in from year-end. The remaining 1.5 per cent of the quantum will be rolled over to the next fare review, given the volatility of energy prices and to ensure sustainability.

Meanwhile, fares for fully-underground lines such as the North East, Circle and Downtown Lines will become cheaper as the PTC will bring them in line with the fares for above-ground lines. To simplify the structure, the PTC will adopt a distance-based approach to calculate fares on the shortest travel path. Currently, they are calculated based on the fastest travel path, which may not always be the shortest.

Taken together, this means adults using their cards will save one to 27 Singapore cents off their fares from Dec 30. Senior citizens will see their fares come down by 1 to 7 cents, and student card fares by one cent. However, the prices of monthly concession passes and travel passes will remain unchanged. About 2.2 million commuters are expected to benefit from the fare revision.

As public transport fares go up, so too must reliability and service standards

Chairman of the PTC, Richard Magnus, said: "The lower energy prices in 2015 have allowed PTC to reduce all card fares. A prudent and balanced approach however is necessary to ensure the longer term sustainability of our public transport system. We will continue monitoring this closely."

Fares for the underground lines are presently five to 25 cents more expensive for adults than the above ground North-South, East-West Lines and LRT Lines, due to higher operating costs such as from air-conditioned platforms.

The difference in fare structures for rail lines has resulted in fare exceptions that may be confusing to commuters, the council highlighted, and the expansion of rail services could exacerbate the issue further.

All in, the fare reduction will cost SBS Transit, SMRT and LTA about S$8.9 million, S$34.6 million and S$35.6 million in fare revenues per year respectively.

The last time fares were reduced by a similar quantum was in 2009, when fares were cut by a sharper 4.6 per cent. Last year, fares came down by 1.9 per cent.

"Some commuters will see more savings and some will see less, but overall it's good news for commuters," said Professor Park Byung Joon, a SIM University senior lecturer in urban transport management. 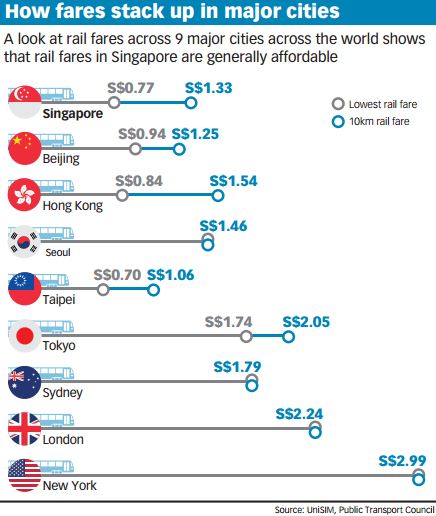 Pointing out that public transport is a public service offered by the government, Prof Park reckons that it makes sense to have one fare structure for everybody.

He said: "With the government contract model for bus services and with the rail financing framework, all assets belong to the government. The need to recover operating costs from fares is no longer relevant. With service levels being improved - for example, increased bus frequencies - all expenses cannot be recovered from fare revenue alone."

The new model for the public bus sector and the Rail Financing Framework allows the transport operators to take an asset light approach and act as an operator, while the government owns all operating assets and is responsible for major capital investments.

The formula adopted by the PTC to calculate fare adjustments - which takes into account core inflation, wages and energy prices - is set to undergo a review next year.

"(With the formula review) the fundamental question is, how much money should be recovered from fares and how much from government subsidies?" added Prof Park.

Meanwhile, the Ministry of Transport said that fares would also be reduced for lower-wage workers and persons with disabilities by a quantum proportionate to the fare adjustment.

Fares for fully-underground lines such as the North East, Circle and Downtown Lines will become cheaper as the PTC will bring them in line with the fares for above-ground lines.

Hong Kong firms have no safety net in fight for survival

[HONG KONG] Hong Kong is being threatened by a "tsunami-like" cataclysm, the city's finance chief has warned, as the...

[RIYADH] Finance officials from the world's 20 biggest economies (G-20) on Sunday referenced climate change in their...

Boris Johnson set to begin trade talks with US in two weeks: Telegraph

[BENGALURU] British Prime Minister Boris Johnson is prepared to begin trade talks with the United States within the...