It will run several pilots using technology to boost the efficiency of financial transactions
Jamie Lee leejamie@sph.com.sg@JamieLeeBT
Singapore will close out the year by rolling out a slew of experiments and plans to boost the efficiency of financial transactions through technology, including the use of digital currency, as the Monetary Authority of Singapore (MAS) makes good on its ambition to build a smart financial centre.
PHOTO: ST FILE

SINGAPORE will close out the year by rolling out a slew of experiments and plans to boost the efficiency of financial transactions through technology, including the use of digital currency, as the Monetary Authority of Singapore (MAS) makes good on its ambition to build a smart financial centre.

In a landmark trial for a financial centre, a pilot will be launched to test interbank payments using blockchain technology with eight banks and the Singapore Exchange; this comes with an option to expand this trial to transactions in foreign currency. 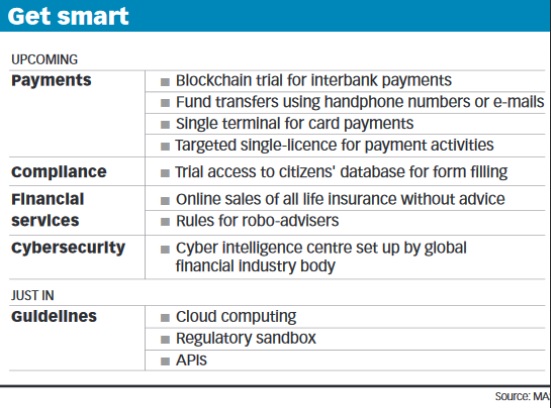 Singapore will also test a way of feeding existing citizens' data to banks and other financial institutions to speed up form-filling.

MAS managing director Ravi Menon said at the opening of Singapore's first fintech conference on Wednesday: "In an industry facing the headwinds of lower economic growth and heavier regulatory burdens, innovation must be the way to refresh and re-energise the business model.

"And innovation is not always with high-tech. It is about seeking newer and better ways to do things, about a spirit of enterprise. It is about hope in the future. The financial industry needs that."

Blockchain is a distributed ledger of transactions, created from digital "blocks" containing information of financial transactions linked in a virtual chain. Participating banks and relevant institutions in the blockchain can access the information on this ledger.

With this system, participating banks pay each other directly with this digital currency, instead of first sending payment instructions through MAS. This could do more than the current system to strengthen resilience and lower costs, said Mr Menon.

The banks can also transact directly on a blockchain, as OCBC did with its first-ever blockchain payment transaction with its subsidiaries, OCBC Malaysia and Bank of Singapore, this month. The solution was jointly designed by OCBC Bank and Singapore-based BCS Information Systems.

Mr Menon said: "This project marks the first step in MAS's exploration of ways to harness the potential of central bank-issued digital currency. The next phase of the project will involve transactions in foreign currency, possibly with the support of another central bank."

UOB's head of group technology and operations Susan Hwee said the bank will increase investments in blockchain, as it sees potential in the technology.

Oliver Bussmann, former UBS chief information officer who worked on blockchain technology at the bank, said at the conference he was bullish about cross-border transactions on distributed ledgers, pointing to the momentum around the topic.

But well-known former banker Blythe Masters, now chief executive of distributed-ledger service start-up Digital Asset, remarked wryly that the network effect is hard to achieve: "In other words, multiple entities get a religion - preferably the same religion - and decide to show up at the same venue to worship. We know how often that's happened in the history of mankind."

In a second experiment, Singapore will try extending information in a government database to the financial industry. The information, kept in a portal known as MyInfo, includes personal details such as NRIC numbers, and residential addresses. The aim is to help financial institutions use this data for form filling, cutting the slog and chances of errors during data entry when gathering the same types of basic information on customers.

This pilot will be run with as many as three banks in the first quarter of next year. DBS and Standard Chartered are said to be confirmed; OCBC is getting final approvals to be involved in the trial. MAS will run this experiment with the Ministry of Finance and GovTech.

Singapore will also look at more sophisticated uses of citizens' data so that the financial industry can meet the know-your-customer (KYC) requirements in a far less laborious manner, said Mr Menon.

Meanwhile, Singapore is gunning to be a "centre of excellence" for the use of application programming interfaces (APIs), which are a set of protocols that define how a system talks to another. It has set out standardisation guidelines - key to prompting common usage among financial institutions and start-ups, said Mr Menon.

MAS has also noted that more consumers want to buy financial pro-ducts online. It will soon allow insurers to offer a full suite of life insurance products online without advice - expanding beyond simple term-life and broadly standardised policies - but not without setting out guidelines on safeguards.

As well, it will propose ways to manage algorithms for robo-advisers, given that such digital-advice platforms for investment services will soon reach Singapore, said Mr Menon. This will expand on existing efforts in the retail-payments space, with the Association of Banks in Singapore (ABS) working on a scheme that will enable consumers to pay one another using mobile numbers or e-mail addresses as identifiers, rather than bank account numbers. ABS will also move the industry towards using a single-payment terminal that will accept all major card brands.

Amid all this innovation, MAS has attracted deeper expertise in cyber-security; the Financial Services - Information Sharing and Analysis Centre from the US is setting up in Singapore its only cyber-intelligence centre in the Asia-Pacific. The centre is the global financial industry's go-to resource for cyber-threat intelligence analysis and sharing, said Mr Menon.

"As more financial services are delivered over the Internet, there will be growing security and privacy concerns from cyber threats," he said. "Users will have confidence in new technologies and innovative services only to the extent that they have confidence in cyber security."

All in, Mr Menon pointed out that regulation must not "front-run" innovation. "The regulator must run alongside innovation. It is important to keep pace with what is going on, assess what the risks might be, and continually evaluate whether it is necessary to regulate or to leave things to evolve further."

MAS on Wednesday finalised its regulatory sandbox guidelines for financial institutions and start-ups to test their ideas. It is already reviewing some sandbox applications, and expects to have some of these proposals launched in the sandbox soon.