Siow Li Senlisen@sph.com.sg@SiowLiSenBT
Lynette Khoo
Both banks are slugging it out with a zero-per-cent spread under their fixed-deposit home-loan rate (FHR) packages aimed at projects under construction, with no lock-in period and a one-time free conversion for a limited time only.
PHOTO: REUTERS

A FIERCE home loans war has broken out between DBS Bank and United Overseas Bank, to the delight of home buyers.

The prize, for now at least, is the prospect of financing the purchase of at least 1,225 homes being offered in the year's first two new-property launches.

Both banks are slugging it out with a zero-per-cent spread under their fixed-deposit home-loan rate (FHR) packages aimed at projects under construction, with no lock-in period and a one-time free conversion for a limited time only.

The effective interest rate from DBS is 0.6 per cent per annum, and from UOB, 0.65 per cent. These are their current FHR rates.

The zero per cent spread FHR packages applies until the property project receives its temporary occupation permit (TOP), which is typically in three to four years.

Based on a S$1 million loan with a 25-year tenure, this works out to a monthly installment of S$448.80 in the first year, rising to S$1,795.21 in the fourth year as loan disbursement rises with the stages of construction.

The spread for the DBS loan is 1 per cent upon the property project receiving its TOP. For UOB, the spread for the first year after TOP is 0.9 per cent, and in subsequent years, 0.95 per cent. 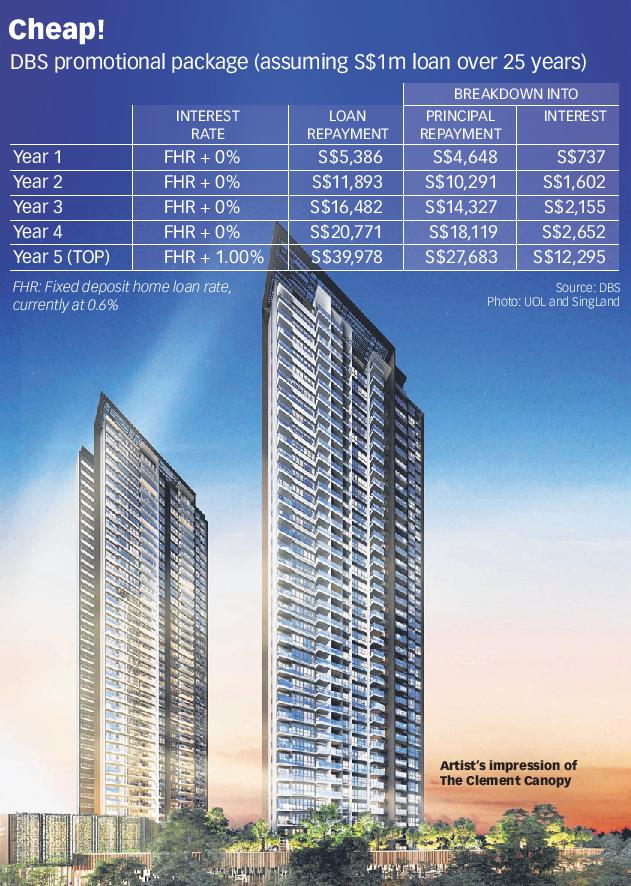 Last weekend, some 200 homes were sold at the first new launch of the year at the 505-unit Clement Canopy, a new condominium in Clementi Avenue 1.

This weekend, the 720-unit Grandeur Park Residences will be launched. The development, a five-minute walk from Tanah Merah MRT station, opened its showflat a week ago, pulling in some 10,000 people.

She told The Business Times on Monday that the special promotion is for all projects under construction, and represents the first time DBS is selling home loans at zero per cent spread.

Its promotion ends on March 6; meanwhile, UOB is understood to be reviewing the expiry date for its zero per cent spread deal.

Some bankers say banks that offer such rates are selling at a loss, unless they are able to cross-sell other products such as mortgage insurance as well.

Ms Tok noted that the market has been quiet since Q3 last year, so such special promotions for the first launches of the year will generate interest.

"We do know of some buyers who are excited with the offer," she said.

On the presence of UOB staff at The Clement Canopy launch offering a similar promotion, she quipped: "Great minds think alike!"

A UOB spokeswoman, asked about the price war, replied: "We regularly review our mortgage packages and adjust our pricing accordingly."

DBS has been aggressive in going after the home loans market. It is the current market leader with nearly 29 per cent market share, up from 25 per cent in 2014.

Ms Tok said that when the bank launched the FHR package in April 2014, no other bank had such a deal; banks were then selling home loans based mainly on the three-month Sibor (Singapore interbank offered rate) or the SOR (swap offer rate).

The FHR, which uses the bank's fixed deposit rate, is stable and transparent, said Ms Tok.

For almost two years, DBS had the field to itself, as no other bank had similar offerings. The market took to the idea, and DBS began attracting refinancing customers from its rivals, and new customers as well.

Ms Tok said DBS had a few factors going for it in the race to become the market leader in home loans.

The timing was right, people were concerned about rising interest rates and more homes were being sold, she said. Today nine in 10 customers take the FHR package, she added.

Data from the Urban Redevelopment Authority showed a 16 per cent jump in private residential transactions in 2016 to 16,378 units.

UOB, which began fighting back in the second half of last year, is now the market leader for new home loan sales, at about 31 per cent, UOB chief executive Wee Ee Cheong said this month when the bank released its Q4 2016 results.

UOB was not far behind, expanding 9 per cent to S$61.5 billion. OCBC Bank, the second largest bank in Singapore, grew its home loan book by 7.3 per cent to S$60.1 billion.

"We are DBS. We have to and we will," she declared.

"The pricing structure of our home loan packages remains attractive, and we continue to seek prudent growth opportunities in the market. Today, we offer a range of pricing options, customising packages on a case-by-case basis," she said.

[TOKYO] Tokyo stocks opened lower on Thursday with the yen holding firm and risk appetite dampened by concerns about...

ESR-REIT'S distribution per unit (DPU) slipped 0.5 per cent to one Singapore cent for the fourth quarter ended Dec...

[LONDON] Monty Python star Terry Jones has died at the age of 77 after a long battle with a rare form of dementia,...

[NEW YORK] US presidential hopeful Tulsi Gabbard, who is in near last place among Democrats in primary polling,...

[MADRID] Spain's new Socialist government under Pedro Sanchez on Wednesday brokered an accord with unions and bosses...