DBS Group Holdings, the nation's largest mortgage provider, has dialled back its property loans growth forecast by S$1 billion, given that last month's cooling measures are expected to hit sentiment.

At Thursday's second-quarter earnings briefing, a sober chief executive Piyush Gupta said, as he trimmed the bank's property loans growth forecast: "It was not the greatest quarter ... and on balance, given everything, I'll take it."

DBS has a Singapore housing loan market share of 31 per cent.

The bank is also reducing its trade loans - not because of trade tensions, but due to very fine pricing, he said.

Its full-year loan growth forecast has been cut back from eight per cent to between six and seven per cent.

Mr Gupta said this was the weakest quarter for treasury markets income that he has seen in his 10 years at the bank.

Compared to the previous quarter, net profit fell 12 per cent. Q1 had benefited from a "big equity market upsurge", which rapidly sold off in Q2, he said. 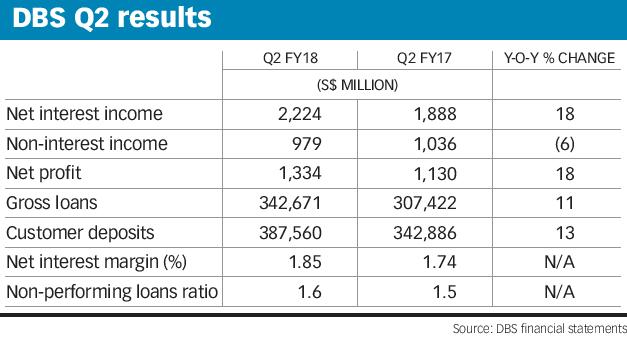 DBS's treasury markets income for the second quarter dropped 59 per cent from a year ago to S$107 million, due to a "perfect storm" of widened Asian credit spreads on the back of trade tensions, flattened yield curve impacting its bond holdings and equity market sell off.

Mr Gupta said he expects a slowdown in the consumer mortgage book.

"We originally anticipated putting on about S$4 billion consumer mortgages. With the slowdown and given what happened in the last set of tightening measures, I anticipate we'll probably give up about half a billion dollars in new-loan booking in the second half of this year, so we'd probably come in at S$3.5 billion instead of four," he said.

He also expects activity to slow down on the developers' side, so overall, the bank is weighing a potential shortfall of S$1 billion in loans on account of the property measures.

On the rising US-China trade tensions, he said this is causing heightened macroeconomic uncertainty.

While analysis showed that the first phase of tariffs on US$50 billion goods (components) had almost zero impact, the second phase, when tariffs could be raised by 25 per cent from 10 per cent on S$200 billion in Chinese imports of finished goods, is less certain.

"This has finished goods like vacuum cleaners and refrigerators. When you start putting duties on that, you wonder how much does the supply chain change?" he said.

He thinks it is very hard to shift from China to alternative providers, whether in the US or anywhere else in the world. Some demand could shift, but whether it would benefit the rest of Asia is in question, he said.

"It could be, therefore, that a country like Singapore, which is a supply hub, winds up OK. But it's hard to actually unravel that and understand what the impact of that might be."

"The biggest problem with the trade tensions is really the spillover impact, and that links back to the treasury markets business. The spillover impact really winds up with the confidence issue; it's a market psychology issue more than what really happens to the underlying trade flows," he said.

But Mr Gupta did have some good news after his sobering outlook for the second half of 2018 - the incredible US economy.

"The good news - and it's an incredible piece of good news - is the US economy is going gangbusters. The reality is that the pace of growth of the US economy can singlehandedly take care of all the other headwinds that you see. For many years, the US consumer consumption demand kept the whole global economy afloat."

The US economy grew 4.1 per cent in Q2, inflation has crept up just above two per cent and wages are beginning to accelerate. "So it's not impossible that the macro impact of the US economy continues to be over-riding, so you could see some pluses as well," he said.

Net interest income rose 18 per cent to S$2.22 billion, with loans growing 12 per cent and net interest margin (NIM) rising by 11 basis points to 1.85 per cent. A stronger NIM pick-up is expected, bringing it higher by one to two basis points above previous guidance of 1.85 per cent for the full year. Its non-performing loan ratio stood at 1.6 per cent from 1.5 per cent a year ago.

The bank said this was due to some "structural impact" from exchange trading and high-frequency activities.

DBS expects to maintain a cost-to-income ratio of 43 per cent this year. The bank has declared its first-half dividend at 60 Singapore cents, up from 33 Singapore cents a year ago as earlier guided.

Barring unforseen circumstances, DBS will pay a S$1.20 dividend for the full year, as earlier guided; based on Wednesday's closing price of S$26.94, that gives a 4.5 per cent yield, said Chng Sok Hui, the bank's chief financial officer.

SINGAPORE will soon calibrate its debt moratorium schemes, with the regulator looking to extend its programmes to...

US dollar near two-month high amid economic, political risks

[LONDON] The US dollar traded near a two-month peak against a basket of currencies on Monday, as doubts about...

Thailand extends emergency ahead of easing ban on tourists

[BANGKOK] Thailand will extend a state of emergency through October as the tourism-dependent nation gears up for the...

[HONG KONG] Hong Kong shares rallied more than one per cent Monday following a strong lead from Wall Street with...