Fewer CNY savings deals as deposits pile up at banks

SAVERS will have to work harder to find a good deal to park their reduced bonuses and smaller "ang pow" packets because fewer banks are running Chinese New Year (CNY) savings promotions.

None of the three local banks have launched the traditional CNY fixed deposit (FD) promotions.

Their current 12-month FD rates range from DBS Bank's 0.35 per cent to OCBC Bank's 0.9 per cent. United Overseas Bank has a 13-month FD which pays one per cent.

To get more than one per cent, savers have to look to Chinese and Malaysian banks, and Standard Chartered Bank.

The poor economy is to blame for the industry's relatively meagre deposit-rate offerings as their growing mountain of savings is making it harder to eke out profits, since selling loans have become that much harder.

Savings have been growing five times faster than loans.

Interest rates promotions are relatively lower compared to last year, said one analyst who did not want to be named. "I think FD rates have come down across all the banks. But, in absence of loan demand, it is still a drag on margins," the analyst said.

Furthermore, the series of privatisations last year, such as Temasek Holdings' S$1.2 billion buyout of SMRT, have added to the savings pile, said a banking source. 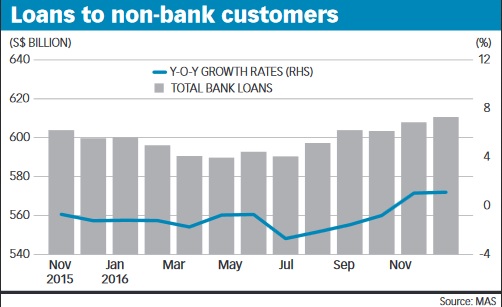 Deposits of non-bank customers in November rose 6.3 per cent from a year ago to S$596.5 billion, while loans were up only 1.1 per cent to S$610.6 billion, according to the Monetary Authority of Singapore. 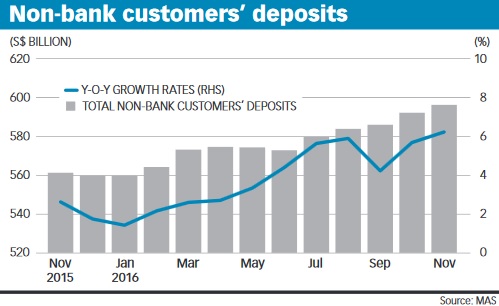 Standard Chartered's FD promotion pays 1.28 per cent for a 10-month tenure, with a S$25,000 minimum placement. The offer expires on Jan 31. "The bank regularly runs best-in-class deposit promotions to reward our clients, including themed promotions during festive seasons," said a StanChart spokeswoman.

And for every S$128,000 deposited, savers get a RISIS Prosperity Tree (worth S$368), while stocks last, she said. "To date, the take-up rate for the time deposits has been very positive," she added.

Interestingly, ANZ, which has sold its Asian wealth and retail business to DBS, is offering a six-month FD promotion of 1.25 per cent. But its "prosperity" offer, which runs until Feb 28, requires an equally prosperous minimum placement of S$150,000.

DBS is expected to complete the integration of ANZ assets in March or April. Upon legal completion of the ANZ transaction, their customers will be transferred to DBS, said a DBS spokesman.

DBS will also definitely honour the interest rate for the duration that they signed up for, he said.

CIMB's promotion had included abalone gifts and it has gotten overwhelming response, the bank said. All the abalone gifts have been redeemed, it added, but the FD deal remains until Feb 11.

The FD deal, which is valid until March 31, is not a CNY promotion but the bank's quarterly FD campaign, said a RHB executive.

To attract customers during the CNY season, OCBC is dangling a "festive rate" tied to insurance sales.

OCBC said customers who purchase any of its regular premium insurance plans with minimum premium of S$7,000 a year can enjoy a festive rate of 11.88 per cent per annum on a three-month FD.

[SINGAPORE] The human resource manager of a Hyflux subsidiary has been charged with corruption on Wednesday.

GSM Building at 141 Middle Road has been launched for sale by tender, after the minimum consent level required for...

80 breaches found at purpose-built dorms annually for the past three years: MOM

[SINGAPORE] About 80 breaches each year have been found at purpose-built dormitories over the last three years,...

BreadTalk to delist from SGX on June 5

BREADTALK Group on Wednesday said the company will be delisted from the Singapore Exchange on June 5, 9am, following...

Google takes down Indian app that removed Chinese ones

[NEW DELHI] Alphabet's Google has taken down an Indian mobile application from its app store that allowed users to...