FD rates are at 1.7 to 2.05%; the latest SSB will pay 1.68% at the end of its first year
Fiona Lamfiolam@sph.com.sg@FionaLamBT
Financial institutions, such as Standard Chartered Bank, are offering 1.7 to 2.05 per cent promotional rates for their 10- or 12-month Singapore-dollar fixed deposits.
PHOTO: AFP

How they stack up

One plausible reason for this drop in demand for SSBs is saturation in investor appetite.

But this is unlikely because the amount of outstanding SSBs stands at S$5.5 billion, which is still small compared to the total deposit base, said Eugene Leow, rates strategist at DBS Group Research.

Instead, higher fixed-deposit rates from banks may have contributed to the lower demand for SSBs, he said.

Likewise, a Standard Chartered (StanChart) spokesman said: "Our clients are generally rates-sensitive and would typically opt for fixed deposits when there are good promotional rates."

Financial institutions are offering 1.7 to 2.05 per cent promotional rates for their 10- or 12-month Singapore-dollar fixed deposits.

The most attractive rate at the moment appears to be from the State Bank of India, which will pay 2.05 per cent for 12-month placements of between S$50,000 and S$1 million in its promotion lasting till end-July.

OCBC is also offering 1.7 per cent for 12-month Singapore-dollar placements of at least S$20,000. 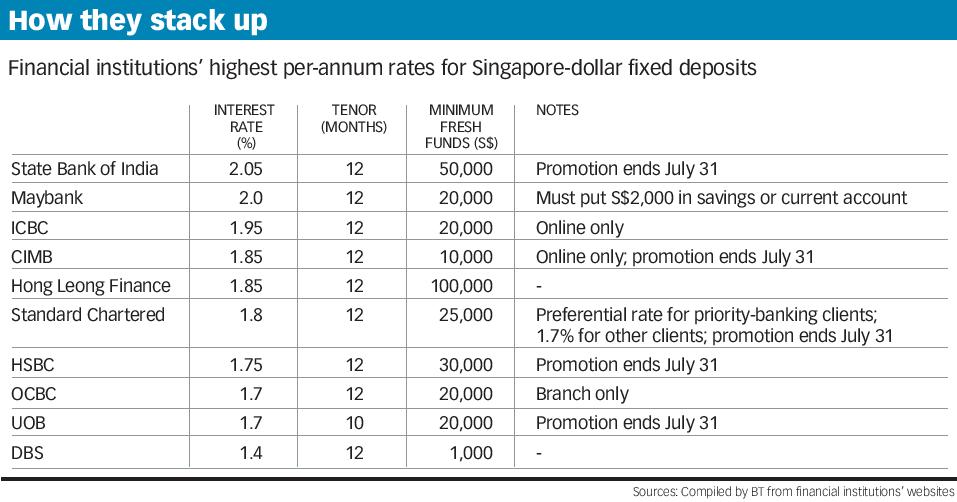 Applications for the Aug 1 SSB will close on July 26. The minimum investment amount is S$500.

Mr Leow from DBS said the 1.68 per cent SSB rate is "quite low", seeing as savers typically don't place their funds beyond the first year and seek "very short-term" investments.

In the coming months, he believes demand for SSBs could ease further if short-term yields continue to fall below 2 per cent, which appears to be a key hurdle rate for investors.

"Savers are quite savvy; I've heard of 'professional' fixed-deposit rollers who go from one bank to another (in search of higher fixed-deposit rates)," he said.

As banks seek funding, the amount of fixed deposits has increased by S$13 billion since the start of the year, Mr Leow noted. "Tightness in the banking system is also reflected in the widening spread between the six-month swap offer rate, or SOR, and the six-month Sibor (Singapore Interbank Offered Rate)," he said.

Since end-May, the six-month SOR has fallen by 28 basis points. In comparison, Sibor has held steady.

The US yield curve is now inverted, with its 10-year Treasury yields lower than short-term rates, with markets already pricing in a US slowdown and the rising risk of a recession, he said.

OCBC's Ms Ling said that there remains competition for funds, thus it might be difficult for financial institutions to lower their fixed-deposit rates significantly in the short term.

She noted that the cut-off yield was 1.93 per cent at the most recent June 27 auction of the Singapore government's six-month Treasury Bills (T-Bills). These will be issued July 2.

But Mr Tan from UBS believes that the current situation - of fixed-deposit rates and Sibor being higher than SSB rates - might not last, especially if the US Federal Reserve starts to cut rates in the coming months.

"This is because Sibor is driven by two key factors: US interest rates and SOR, and it's important for investors to note that SOR is already falling - partly a reflection of growing expectations for a weakening US dollar - on the expectations of the Fed's rate cuts," he added.

[SINGAPORE] Three of the four community cases reported on Thursday (Jan 21) have been linked to a cluster at BS...

[AMSTERDAM] KLM said it would cut an additional 1,000 jobs in 2021 and warned on Thursday that government plans to...

[WASHINGTON] Government data released the day after Joe Biden entered the White House made clear the scale of the...

Britain's IG to buy tastytrade for US$1b in US foray

[LONDON] Britain's IG said it plans to buy US trading platform tastytrade for US$1 billion, venturing into North...