Claudia Tanclaudiat@sph.com.sg@ClaudiaTanBT
MAS is taking less time to complete reviews and investigations of criminal and civil cases, according to its enforcement report on Wednesday.
PHOTO: REUTERS

THE Monetary Authority of Singapore (MAS) is taking less time to complete reviews and investigations of criminal and civil cases, according to its enforcement report on Wednesday.

This comes as the regulator steps up its focus on early detection of market misconduct by working closely with other regulators in Singapore and tapping technology to aid investigations.

The report, which updates the market on enforcement matters in the financial markets undertaken by MAS between January 2019 and June 2020, is made public every 18 months. The matters exclude actions from investigations led by the Commercial Affairs Department (CAD) in the MAS-CAD joint investigation arrangement.

For the 18 months ended June 2020, criminal prosecutions took an average of 24 months compared with 33 months in the previous reporting period, and civil ones 26 months versus 30 months previously.

Average time taken for regulatory actions, however, rose to eight months from six months. It took an average of three months for referrals to external agencies, unchanged from the last reporting period. Across all concluded cases, the average time taken remained the same at eight months.

To be sure, the time taken to complete a review or an investigation depends on various other factors, including the complexity of the case, the number of suspects and the volume of the evidence, said a MAS spokesperson in response to queries from The Business Times (BT).

"MAS has improved our efficiency and effectiveness in investigations over the years, by continually refining our processes, deepening our investigative experience, leveraging technology, and strengthening our collaboration with partners," said the spokesperson. 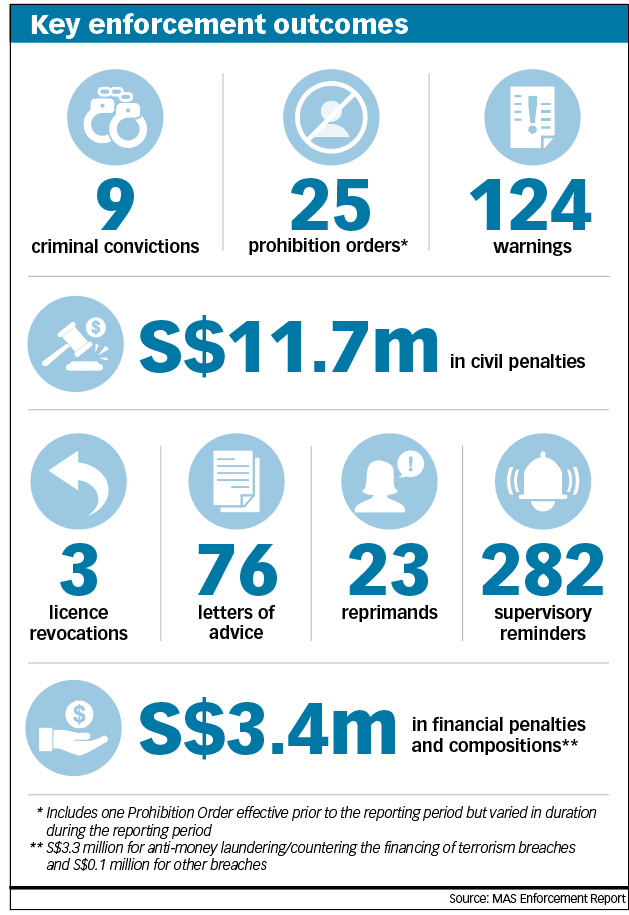 Between January 2019 and June 2020, MAS imposed a total of S$11.7 million in civil penalties for cases of misconduct in trading and failure to disclose shareholdings, while some S$3.4 million in financial penalties and settlements were slapped on 18 financial institutions in Singapore.

Action was also taken against various misconduct, including nine criminal convictions, 25 prohibition orders that bar individuals from working in the financial industry and 124 warnings.

The S$11.7 million in financial penalties in the 18 months ended June 2020 include S$11.2 million in fines imposed on UBS over deceptive trades by the bank's client advisers in Singapore.

UBS client advisers had "engaged in acts that deceived or were likely to deceive" clients about the spreads or interbank prices for transactions in over-the-counter bonds and structured products, said MAS.

The enforcement report was broadly welcomed by the market since its first publication for the 18 months ended December 2018.

Mak Yuen Teen, a governance advocate and professor of accounting, told BT that it is good to see "continued momentum" in enforcement actions.

Still, there are gaps to be plugged.

Prof Mak said that corporate disclosure breaches involving listed companies and their officers, including directors, is an area that is still lacking though he is pleased that MAS has "identified this as a key priority".

He pointed out that based on the report, there has yet to be action against directors of listed companies for market abuse offences.

"This is an area for which I hope will see more outcomes in the next report as I believe corporate misconduct for listed companies has increased due to lack of enforcement in the past," he said.

"Related to that, I hope we will see more directors disqualified from serving as directors in the same way that financial advisers and trading representatives have faced long prohibition orders," Prof Mak added.

Meanwhile, Ms Yuen Thio said the regulator should be given more powers to take immediate action to safeguard the interests of stakeholders in an event where there is a risk of a listed company's assets being jeopardised.

"I also think that the penalties the MAS can impose should be increased so that when, for example, a large international bank has been shown to have participated in unlawful transactions, then the financial punishment can be more severe," she added.

Bitcoin miners in Nordic region get a boost from cheap power

'You checked Tesla the most': Robinhood recaps from a volatile year

MAINBOARD-LISTED Pan Ocean Co is investing 204 billion won (about S$246.5 million) in a shipbuilding contract for a...

[SINGAPORE] There were five new coronavirus cases confirmed as of Sunday noon, taking Singapore's total to 58,524....

[NEW DELHI] Leaders of Indian farmers'unions have agreed to meet ministers on Tuesday, possibly paving the way for a...

[BEIJING] China's central bank urged Ant Group on Sunday to outline a concrete plan as soon as possible to meet...

[LONDON] British fishermen said on Saturday that Prime Minister Boris Johnson had sold out fish stocks to the...

Europe rolls out vaccines in bid to leave pandemic behind