Anita Gabrielanitag@sph.com.sg@AnitaGabrielBT
The Monetary Authority of Singapore ended its "most extensive" ever two-year check on banks involved in the illicit fund flows of 1Malaysia Development Berhad (1MDB) with two more banks getting the rap, bringing the total number of banks here to eight that have been stung in various degrees by the Malaysian scandal.
ST PHOTO: KUA CHEE SIONG

THE Monetary Authority of Singapore ended its "most extensive" ever two-year check on banks involved in the illicit fund flows of 1Malaysia Development Berhad (1MDB) with two more banks getting the rap, bringing the total number of banks here to eight that have been stung in various degrees by the Malaysian scandal.

The last two banks, Credit Suisse and United Overseas Bank (UOB), were fined S$700,000 and S$900,000 for seven and nine breaches of anti-money laundering (AML) rules, respectively, with MAS noting however that none had "pervasive" control weaknesses.

Their fines are also the lowest among the banks that were earlier hit with financial penalties that ranged between S$1 million (DBS Bank) and S$13.3 million (BSI Bank) as a result of MAS' scrutiny into 1MDB-related money flows within the financial system here that has led to unprecedented actions against errant institutions and individuals.

A total fine of S$29.1 million have been slapped on the banks with the worst blow suffered by Swiss private banks BSI and Falcon which were ordered to ship out of here for their "egregious failures of anti-money laundering controls and improper conduct by senior management".

"The price for keeping our financial centre clean as it grows in size and inter-connectedness is unstinting vigilance," said MAS managing director Ravi Menon.

"The two-year long 1MDB-related review holds key lessons for both MAS and financial institutions in Singapore," he said, adding that surveillance has cranked up while banks have tightened their controls. 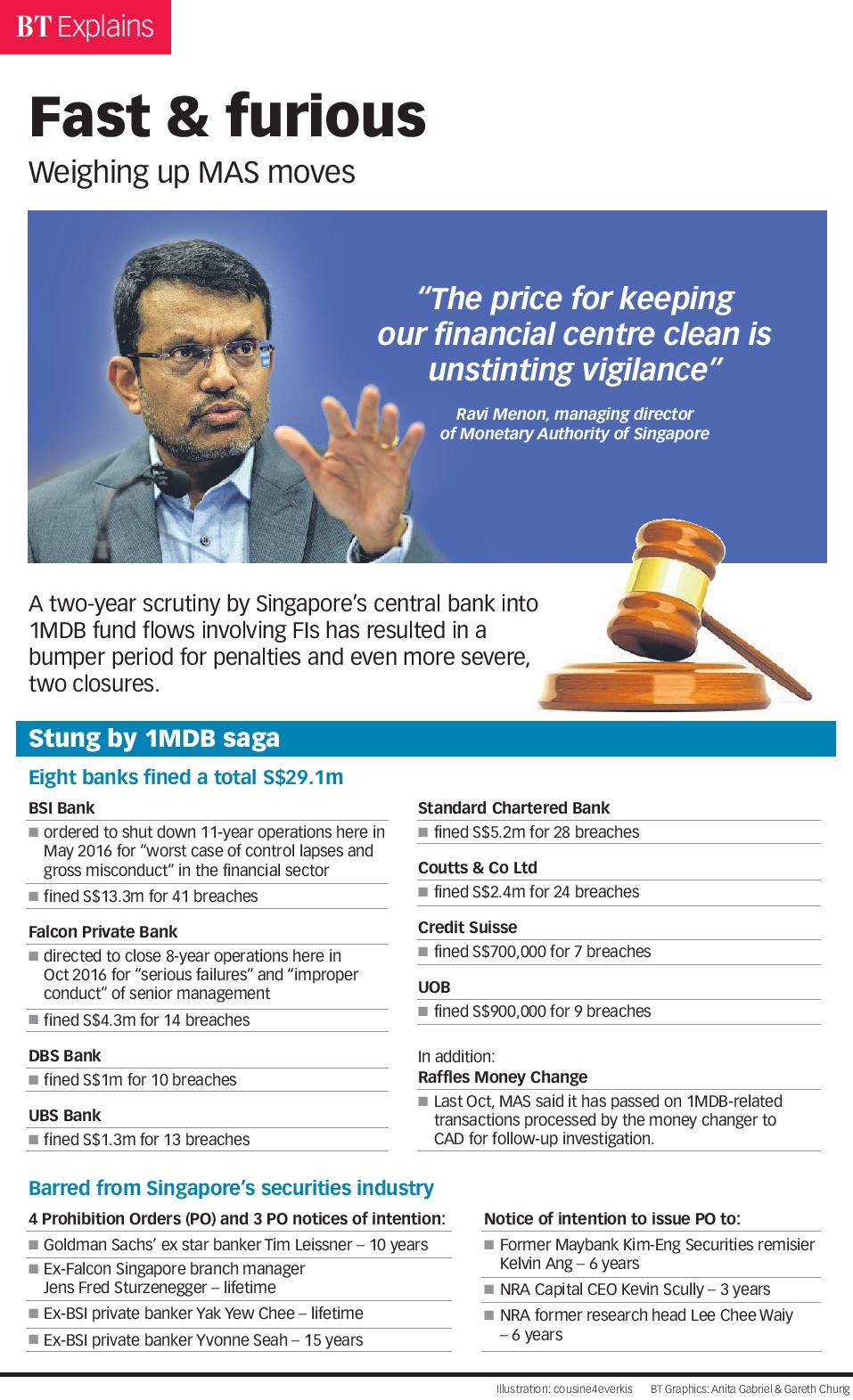 In the latest move, MAS also slapped Prohibition Orders (POs), including two lifetime bans, on three former private bankers, all of whom have already been charged and convicted in Singapore's court and were connected to Low Taek Jho or Jho Low, the man at the centre of Malaysia's state-owned 1MDB controversy.

The bans were issued against two former BSI private bankers Yak Yew Chee and Yvonne Seah and former Falcon Bank's branch manager, Jens Sturzenegger, all of whom have been convicted in Singapore court in relation to the 1MDB probe.

Three others including Kevin Scully, a well known veteran market strategist here and chief executive of NRA Capital were served notice of MAS' intention to issue POs against them. In May, the watchdog imposed a ten-year PO on Goldman Sachs ex-banker Tim Leissner who had landed the bank with multi-billion dollar deals with 1MDB.

The POs bar these individuals from taking part in Singapore's securities and financial services sectors here.

Both Credit Suisse and UOB said on Tuesday that they would continue to strengthen their AML processes and controls and pledged to donate the profits associated with the transactions to a worthy cause.

". . . (We) regret that we have fallen short of the MAS' and our own high standards," said a Credit Suisse spokesperson in a statement.

On UOB's part, it said: "We expect staff to uphold the highest ethical and professional standards and will not condone behaviour that falls short of this".

Singapore's probe into 1MDB monies which is still ongoing began in March 2015.

While the criminal investigations by the Commercial Affairs Department have been targeting individuals connected to the complex web of 1MDB transactions, MAS was examining the financial institutions through which these funds flowed for breaches and control lapses. So far, Singapore prosecutors have convicted five people, the latest involving Kelvin Ang, a former remisier at Maybank Kim Eng Securities who was fined S$9,000 last week after he pleaded guilty to a corruption charge.

The charge was related to a gratification sum of S$3,000 that Ang had paid to Lee Chee Waiy, then a research analyst at NRA Capital - a firm founded by Mr Scully - to expedite a favourable valuation report on Petrosaudi Oil Services Ltd (PSOSL) to support the acquisition by 1MDB.

MAS proposed a six-year PO on Ang and Lee and three years for Mr Scully. "As CEO of NRA, Mr Scully had failed to ensure that his analyst, Mr Lee, had exercised sufficient care, judgment and objectivity in the valuation of PSOSL," it said.

The regulator said its review had uncovered a complex web of transactions involving numerous shell companies and individuals operating in multiple jurisdictions, including the United States, Switzerland, Hong Kong, Luxembourg and Malaysia.

"The good progress achieved to-date would not have been possible without close international co-operation," it added.

[TORONTO] Canadian Prime Minister Justin Trudeau is facing a probe over his government's decision to award a...

WHO urges countries to 'wake up' and halt coronavirus

[PARIS] Air France management said Friday it planned to eliminate 7,580 jobs at the airline and its regional unit...

[BENGALURU] Gold prices were little changed on Friday as worries over an accelerating number of coronavirus cases...

[BENGALURU] European stocks fell on Friday after gaining ground during the week as a surge in US coronavirus cases...