Siow Li Senlisen@sph.com.sg@SiowLiSenBT
The Singapore dollar plunged to 1.40 against the US unit on Thursday, reflecting growing recession fears as new reported cases of Covid-19 - while slowing down inside China - seem to be picking up pace in the rest of the world.
PHOTO: BLOOMBERG

THE Singapore dollar plunged to 1.40 against the US unit on Thursday, reflecting growing recession fears as new reported cases of Covid-19 - while slowing down inside China - seem to be picking up pace in the rest of the world.

The SGD's slide on Thursday was in tandem with broad weakness in Asian currencies due to concerns stemming from the novel coronavirus outbreak, said Peter Chia, United Overseas Bank FX strategist.

As a whole, the Asia Dollar Index has retreated to 103.50, its lowest levels in more than two months.

"The USD/SGD move from 1.35 to 1.40 in the past month has been one of the steepest climbs in recent years," Mr Chia pointed out.

The battered SGD has lost 3.9 per cent since the 1.35 level at the end of 2019. Against its peers, the SGD is among the worst performers, ranking 16th out of 20. Only the Thai baht, New Zealand dollar and Australian dollar have fallen more.

The Covid-19 outbreak has achieved what the US-China trade war did not, said Philip Wee, DBS Bank FX strategist. Last May, Mr Wee had expected the SGD to weaken to 1.40 by the third quarter of 2019. 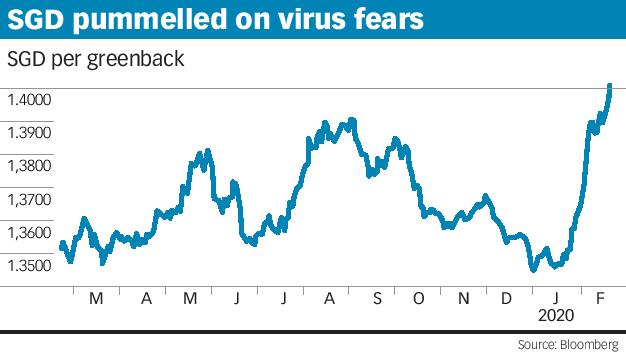 This month, the epidemic has weakened the SGD NEER (nominal effective exchange rate) into the lower half of its policy band and led the Singapore government to warn of a possible recession in 2020, he said.

This year's official growth forecast was downgraded on Feb 17 to between -0.5 per cent and 1.5 per cent from 0.5-2.5 per cent previously.

"Covid-19 has not only delayed the recovery from the Phase One trade deal signed in mid-January but also broadened the economic weakness into domestic demand, for example tourism and retail sales," said Mr Wee.

The government expects it will hit the economy harder than Sars (Severe acute respiratory syndrome) in 2002-2003, he added.

"Unfortunately, China's economy is still slowing amid an ongoing trade war today. Unless Covid-19 stabilises quickly in Q1 and does not extend into Q2, the door remains open for a shift to a neutral or zero appreciation stance at the next SGD policy review in April," Mr Wee said.

The yen has also lost its safe-haven appeal; it has depreciated 2.8 per cent against the USD since the beginning of the year.

Outside of China, Japan has reported the most coronavirus cases.

Having fallen into recession in Q4 2019 on quarter after a sales tax hike in October, Japan is expected to post negative growth in subsequent quarters due to Covid-19.

Talk of a possible contraction is also in Europe and the euro has declined 3.8 per cent since the end of 2019, falling to levels which reflect recession risks, noted Mr Wee.

How much more can the local unit fall?

While the SGD has moved very sharply in the past several weeks, and there is a technical resistance at 1.41, Mr Wee said he'd be a bit cautious of a strong rebound.

Some market watchers point to the V-shape recovery back in 2003 after the Sars outbreak was contained. But China then posted 10 per cent growth, he recalled. "China's long-term potential growth is moving to below 5 per cent," he said. It was about 6 per cent in 2019.

Unless the Covid-19 outbreak deteriorates further, we may have already seen a bulk of the SGD weakness due to the expected growth slowdown in the first quarter of 2020 and also on expectations that the Monetary Authority of Singapore will ease its monetary policy in April, according to UOB's Mr Chia.

"Moving forward, assuming that new Covid-19 cases peak in late-April to early-May, a growth rebound in the second quarter of 2020 may spur a recovery of the SGD towards 1.37 by the end of the second quarter," added Mr Chia.

Terence Wu, OCBC Bank currency economist, said that even after the Covid-19 situation takes a turn for the better, the costs to the economy have to be counted.

"Thus, there may still be considerable uncertainty on the macro front for Singapore and the rest of Asia. On the flip side, economic prints in the US has been more resilient than expected since the start of the year, and the improvement in growth momentum is not showing signs of slowing down," noted Mr Wu, adding: "From a relative macro perspective, the USD should be favoured against the SGD and the Asian currencies on a multi-week horizon."

[WASHINGTON] The US government is now recommending Americans wear cloth face coverings on a voluntary basis to stem...

Oil surges more than 13% on hopes of output deal

[NEW YORK] Crude futures surged for a second day on Friday, with both US and Brent contracts posting their largest...