Ann Williamsann@sph.com.sg
Singapore's banking sector will face greater headwinds over the coming quarters from the double whammy of the latest property cooling measures and rising trade tensions between the US and China, a research house said on Wednesday.
PHOTO: ST FILE

SINGAPORE’S banking sector will face greater headwinds over the coming quarters from the double whammy of the latest property cooling measures and rising trade tensions between the US and China, a research house said on Wednesday.

Turning cautious on the sector's outlook, Fitch Solutions Macro Research said it has lowered its 2018 and 2019 loan growth forecasts for Singapore banks to 5.0 per cent and 4.5 per cent respectively, from 6.4 per cent and 6.0 per cent previously.

Year-on-year (y-o-y) growth in Singapore dollar-denominated loans by domestic banking units hovered between 5.4 per cent and 5.9 per cent in the first six months of 2018, and "we expect it to come under pressure over the coming months", said Fitch Solutions, which combines Fitch Ratings credit insights with BMI Research expertise. 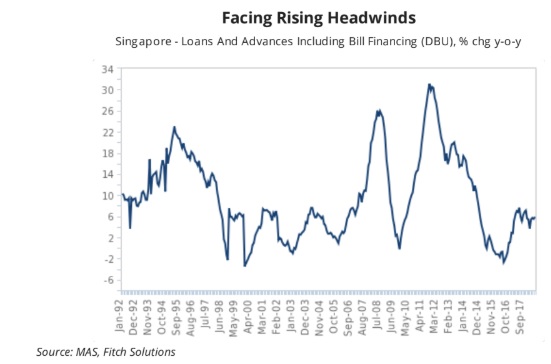 With housing and bridging loans accounting for a significant 30 per cent of overall loans, and more than 75 per cent of all consumer loans, credit growth is likely to be capped by the cooling measures, said Fitch Solutions.

Mortgages and bridging loans expanded by around 4.5 per cent y-o-y for the first half of 2018, slightly higher than the average of 4.2 per cent growth in H2 2017. 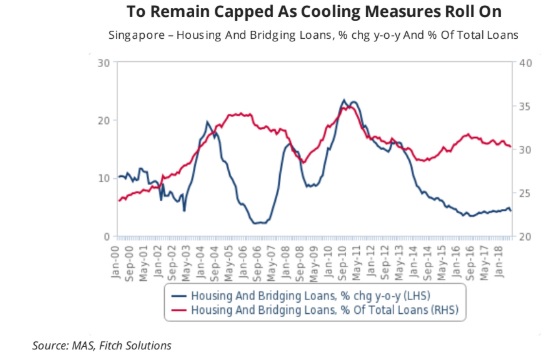 Fitch Solutions noted that previous tightening of LTV ratios since 2010 has all negatively impacted mortgages. For example, after the LTV limits for buyers who already have at least one outstanding loan was cut in January 2013, the growth in housing and bridging loans headed downhill from 16.2 per cent that month, hitting bottom at 3.4 per cent in the July-September 2016 period, said the firm.

It added that of Big Three Singapore banks, UOB is likely to take the biggest hit from the latest property curbs given that it has the largest exposure to housing loans at 26.8 per cent of overall gross loans (as at Q2 2018). This is followed by OCBC at 26.1 per cent and DBS at 21.6 per cent.

Deutsche Bank to close 20% of domestic branches in coronavirus shift

Sterling falls to two-month low ahead of new UK restrictions

Airlines call for Covid-19 tests before all international flights

[PARIS] Global airlines called on Tuesday for airport Covid-19 tests for all departing international passengers to...

CATALIST-LISTED Viking Offshore & Marine's plan to lease certain assets after selling them off "will help...

[WASHINGTON] America's economy has shown "marked improvement" since the coronavirus pandemic drove it into recession...

Swee Hong rejigs board ahead of delisting

WATCH-LISTED construction company Swee Hong, which has been ordered to delist on Wednesday, has ended the employment...

[PARIS] Ralph Lauren said it's trimming its workforce as the preppy apparel maker changes its structure and...