DESPITE a challenging year for global financial markets in 2018, Singapore’s assets under management (AUM) increased further by 5.4 per cent to S$3.44 trillion, according to an annual poll by the Monetary Authority of Singapore (MAS).

This growth was mostly thanks to a 15 per cent surge in alternative assets to S$646 billion last year, which was supported by strong inflows and continued valuation gains across private market asset classes including private equity (PE) and venture capital (VC), the central bank said on Wednesday.

Singapore continued to serve as the global-Asia gateway for asset managers and investors to tap the region’s growth opportunities, with three-quarters of AUM sourced from outside the Republic in 2018.

Singapore’s AUM growth was uneven across the traditional and alternative asset management sectors, the survey found.

Inflows were strong in traditional sector strategies managed or advised out of Singapore, but these were more than offset by weaker valuations across major asset markets in tandem with global trends. As a result, traditional AUM was sluggish and shrank 7 per cent in 2018.

However, the alternatives sector continued to register robust growth, expanding by 15 per cent to S$646 billion last year. In particular, PE, VC and real estate saw strong inflows and continued valuation gains as investors increased their exposures to private assets, to enhance returns and diversify portfolios.

“Singapore, as a leading private markets hub, is an attraction location for investment managers and an increasing number of global public investors, including sovereign wealth funds and pension funds,” MAS said in its survey report. 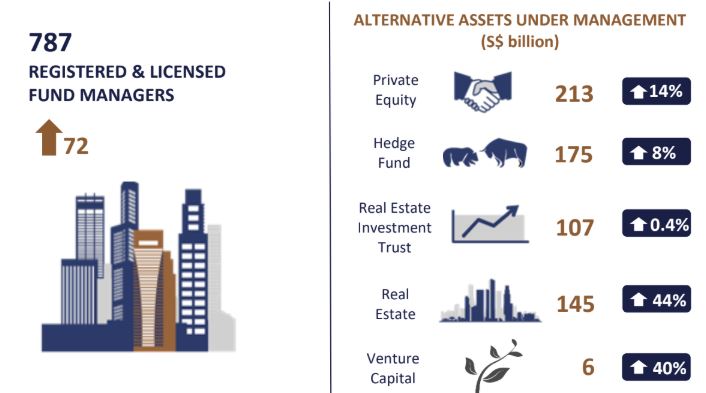 In the medium term, prospects for the city-state’s asset management industry remain favourable.

For one, AUM in Asia-Pacific is expected to almost double from 2017 to about US$30 trillion in 2025, according to PwC’s estimates, and Singapore is well placed to serve this regional trend, the central bank noted.

Fresh demand from global investors for growing areas such as private markets, infrastructure and green investments will also fuel the growth and diversity of the Singapore ecosystem.

MAS also said on Wednesday that the Variable Capital Company (VCC) framework is expected to be operational by the end of 2019. VCCs are a flexible corporate structure for investment funds, meant to encourage managers to co-locate fund domiciliation in Singapore. Before the framework becomes operational, MAS will collaborate with interested fund managers on a pilot programme to identify areas of improvement within the process of incorporating or re-domiciling funds as VCCs.

Pandemic putting millions of Europeans on path to a debt crisis