Wong Kai Yikaiyiw@sph.com.sg
Both Temasek Holdings and bond issuer Temasek Financial (IV) Private Limited have exercised the upsize option to increase the issue size by S$100 million, putting all of it towards the public tranche of the offering.
PHOTO: BLOOMBERG

IN view of the "strong demand" for its first retail bonds, Temasek Holdings has upsized its S$400 million bond offer by S$100 million, with the extra allocation all going to the public tranche.

The exercise of the upsize option was done to enable all 53,282 valid retail applications to receive some allocation, said the Singapore investment company in a media release on Wednesday.

About 70 per cent of bonds in the public offer went to applicants who applied for S$30,000 or less, said Temasek.

Total bids from from institutional, accredited and other specified investors for Temasek's T2023-S$ Temasek Bond placement of 2.70 per cent guaranteed notes due 2023 were about S$1.438 billion, Temasek said.

Leong Wai Leng, Temasek's chief financial officer, said: "We would like to thank all the applicants for their support for our T2023-S$ Temasek Bond. We appreciate the confidence they have all shown in us. The demand for both the public offer and the placement was robust, amounting in aggregate to about S$3 billion. 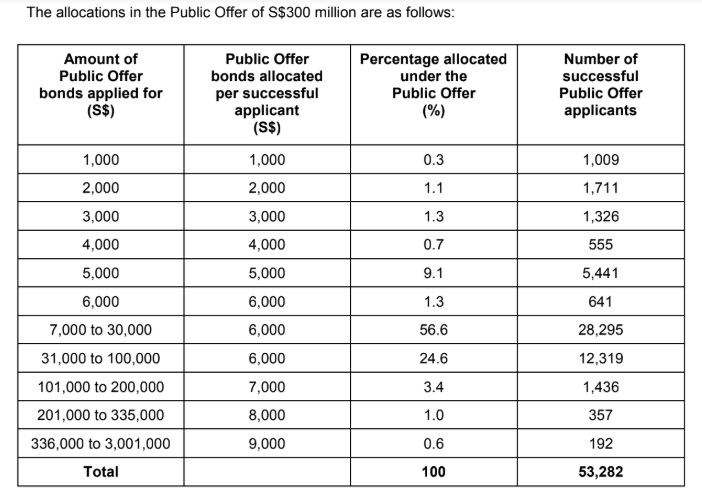 The T2023-S$ Temasek Bond will be issued on Thursday and begin trading on the Singapore Exchange's mainboard on Friday at 9am. Retail investors can check their allocations by logging into their CDP (Central Depository) accounts from Thursday.

Invalid applications, or applicants who did not receive the full allocation for which they applied, will have their application amounts or the balance refunded without interest, and credited to their DBS, POSB, OCBC or UOB bank accounts within 24 hours after the balloting of the public offer bonds.

The next financial crisis may be coming soon

CASHBACK company ShopBack and budget hospitality firm RedDoorz are investigating breaches of their IT systems that...

[TOKYO] Mitsubishi Motors will seek voluntary retirement from 500 to 600 employees, mostly in management, in Japan...

Three dead in fire at Huawei campus in southern China

[BEIJING] Three people have been found dead after a huge fire broke out at an unfinished research facility belonging...

[BEIJING] The World Health Organization (WHO) has supported China's campaign to vaccinate certain people against...

Australia PM on not sharing vaccine: History will be 'severe judge'