Part of the proceeds from IPO will be used to acquire homegrown store fixtures maker Futuristic, and to repay a S$321.9m loan used to finance last year's privatisation
Cai Haoxianghaoxiang@sph.com.sg@HaoxiangCaiBT
Hoe Pei Shanhpeishan@sph.com.sg@PeiShanBT
Mr Sim will be V3's executive chairman and CEO. His daughter Rachel has been appointed a non-executive director.
PHOTO: BLOOMBERG

LESS than eight months after OSIM International officially delisted from Singapore Exchange (SGX), founder Ron Sim is relisting it in Hong Kong under the name of V3 Group.

While the IPO pricing is not yet out, an analyst that has covered the company told The Business Times that V3 Group will likely command a better valuation than what OSIM International delisted for, due to its listing location in Hong Kong.

Jamie Allen, a former member of the Stock Exchange of Hong Kong Listing Committee and the Hong Kong-based secretary-general of the Asian Corporate Governance Association, said: "Hong Kong is a deeper market with more liquidity, so perhaps V3 also believes it will get more trading in Hong Kong and more investor support."

Others said OSIM jumped ship due to its business strategy. Eddie Wong, partner of capital markets services at PwC in Hong Kong, said companies which want to focus on China tend to choose to list in Hong Kong.

He said OSIM has grown successfully from its listing in 2000 to its delisting in 2016, and consumer stocks in the region continue to see investor interest.

"Food and beverage stocks on SGX are trading at a price-to-earnings ratio of 23, while the retail and agri-commodity segments trade at around 20 times," he said.

"Over the past 10 years, Singapore's largest consumer sector stocks have also generated similar gains to their peers in the region, with highly competitive valuations."

According to a preliminary prospectus filed with the Stock Exchange of Hong Kong on Wednesday, V3 Group, a Cayman Islands holding company, was incorporated in March.

It holds OSIM International's old massage chair, luxury tea and nutritional supplements businesses. V3 will also own 69 per cent of Futuristic, a Singapore-headquartered business that made S$68 million in revenue in 2016.

Mr Sim, 58, will be V3's executive chairman and chief executive officer. His daughter Rachel, 27, has been appointed a non-executive director. Ms Sim joined OSIM unit TWG Tea as a sales executive in 2012 and became an assistant marketing manager in 2016.

Another key executive is executive director Teo Chay Lee, 58, who joined OSIM in 1989 as a salesman and rose to hold various positions such as chief operating officer and director of operations.

The Hong Kong listing will mark the latest chapter in the storied history of OSIM and its founder Mr Sim. 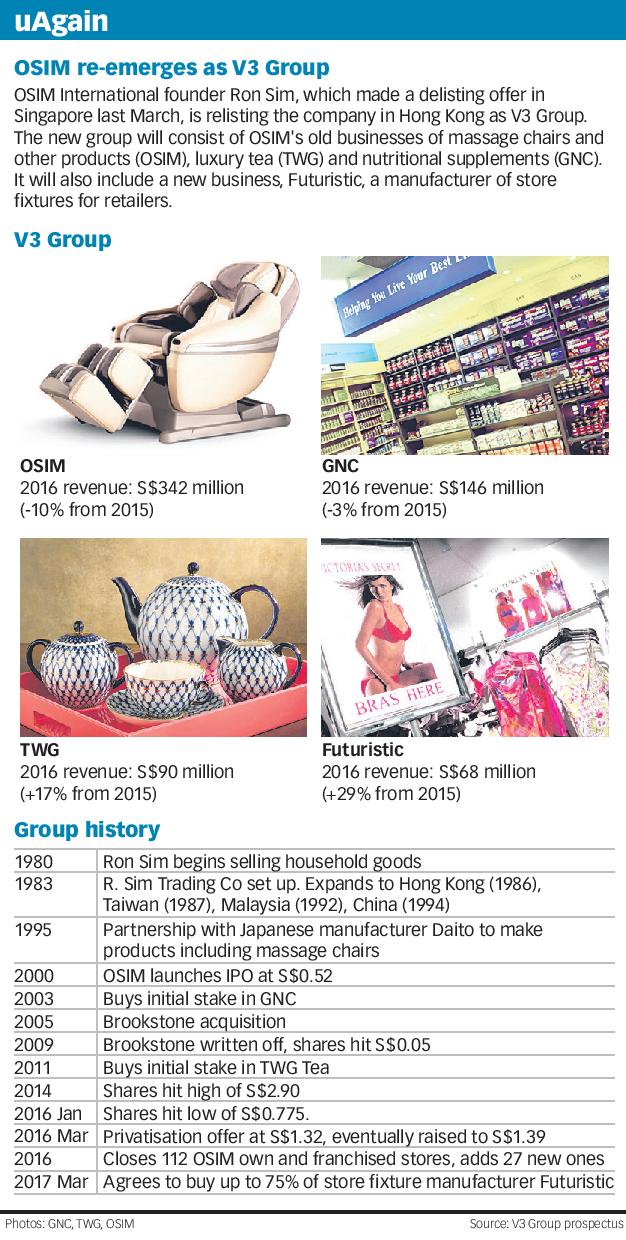 Leaving school after his O Levels, Mr Sim was first a household appliance salesman before venturing in the 1980s into retailing household goods like knives, hand-held massagers and foot reflexology rollers.

He expanded to Hong Kong in 1986 after he was hit hard by the 1985 recession in Singapore. Expansion to Taiwan, Malaysia and China followed. OSIM was formed in 1994, with a globe added to Mr Sim's surname symbolising his global ambitions.

But China's slowdown from 2014 hit OSIM hard. Seizing an opportunity after share prices plunged in 2015-16, Mr Sim launched his takeover offer for OSIM in March 2016, citing the need to reorganise his company without compliance burdens.

Since then, the two biggest revenue contributors to OSIM - the core massage chair business and GNC - continued to slide. OSIM's net profit slid from an adjusted S$67 million in 2015 to S$52 million in 2016. During 2016, it launched luxury massage chair uLove, upper body massager uJolly and shoulder massager uMoby, among other products. It also closed a net 68 OSIM own stores and 17 franchised stores, with store closures mainly in China. At end-2016, it had 346 OSIM own stores and 103 franchised stores.

As part of preparing for the IPO, OSIM will transfer its 8.75 per cent interest in tech business Trek 2000 International to Mr Sim.

Looking ahead, V3 plans to open 60 OSIM stores, 45 TWG Tea locations, and 30 GNC stores net of closings in the next three years.

Contacted on Thursday evening, Mr Sim told The Business Times that he could not comment, citing advice from his lawyers.

Credit Suisse, Bank of China International (BOCI) and Jefferies are the joint listing sponsors. All three declined to comment.

READ MORE: What might the new OSIM be worth?

THE fiscal prudence and discipline of successive governments have put Singapore in a “strong position” to overcome...

CATALIST-listed DLF Holdings on Tuesday announced after trading hours that it is convening an extraordinary general...

STRUGGLING boxship operator Pacific International Lines (PIL) has confirmed that it is in talks with Heliconia...

SINGAPORE stocks rallied strongly on Tuesday after an extended weekend, amid generally firm sentiment across the...