DESPITE blue-chip counter Singtel posting its unprecedented quarterly loss, analysts were less negative about the general financial performance of Singapore-listed companies for the recent quarter.

As at Nov 14, a total of 443 companies listed in Singapore had released their financial results for the July-September quarter. The number of corporates that performed poorer and those that fared better were evenly split at 221 versus 222.

A tally by The Business Times shows nearly one in three public companies in Singapore ran up losses, with 314 being profitable against 129 loss-making. Their combined net profits were almost 12 per cent lower than the total earnings for the corresponding period a year ago.

Their total revenue stood at S$107.4 billion, one per cent lower than the S$108.4 billion generated a year ago.

Singtel, hobbled by its key associate's provision, was one of those that spilled red ink with a S$668 million loss, reversing from a S$667 million earnings a year ago.

Although the corporate results were not too pleasing, some pundits found them "less disappointing" while at least one other analyst described the performance as "healthier".

Lim Siew Khee, head of Singapore research at CGS-CIMB, wrote in a recent report that the results were "strong" with "a healthier tone", as the positive-negative surprise ratio improved quarter-on-quarter with outperformers and underperformers evenly split as earnings-surprise ratio stood at 15:17 versus April-June quarter's 13:22.

She noted: "The ratio of earnings surprise versus disappointment improved significantly to 1:1.2 compared to 1:4 in Q2 (April-June quarter)."

About 100 companies were on her unit's radar, 86 of which posted their financial results for the July-September quarter.

But Ms Chua said that the earnings revision trend for stocks under her unit's coverage has slipped into technical recession or two consecutive quarters of earnings downward revisions. 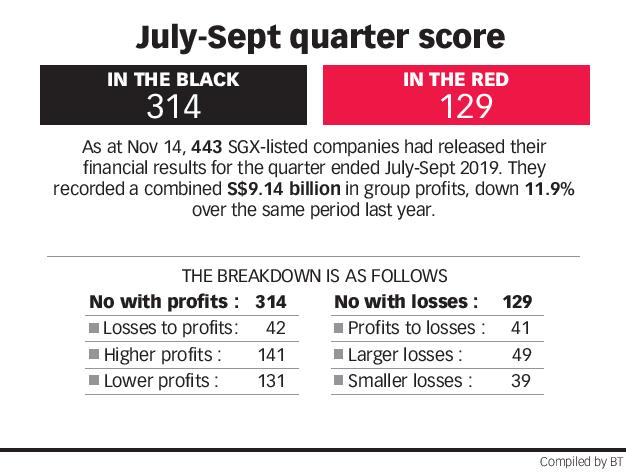 The banks were the bright spots, CGS-CIMB's Ms Lim noted, with the local trio outperforming expectations and led the earnings upgrade by 4 per cent for 2019 and 2020.

DBS saw its net profit rise 15 per cent to S$1.63 billion but OCBC Bank's earnings were 6 per cent down to S$1.17 billion after booking a one-off charge of S$91 million at its Indonesian banking unit

UOB had a bottom line of S$1.12 billion for the recent quarter, an improvement of 8 per cent over a year ago.

In contrast, companies in the transport-related sector disappointed analysts, with ComfortDelgro and Singapore Airlines (SIA) both flagged by DBS and CGS-CIMB as underperformers.

Cargo revenue declined 16.3 per cent due to a drop in air freight demand amid US-China trade tensions, and exports slowdown in key manufacturing countries in Europe and Asia.

CGS-CIMB's Ms Lim noted that ComfortDelgro is being pressured on both the private and public transport fronts.

The oil and gas sector continues to suffer from insufficient base load due to weak order flows and low order book for equipment, analysts noted, with the embattled Sembcorp Marine registering higher losses.

SembMarine fell short of analysts' expectations with a S$53 million loss for the quarter, greater than the S$30 million loss a year ago.

As companies put the earnings season in the rearview mirror, analysts are already looking at what could be in store for the October-December quarter.

DBS' Ms Chua expects earnings revision trend to be either less negative or turn slightly positive if US-China trade sentiment improves with a "phase one" deal.

Jefferies' Mr Guha said that the banks' bottom line will be flat as headwinds are likely to stay.

Nicolas Van Broekhoven, who publishes on markets insights platform Smartkarma, foresees the oil and gas sector will continue to have a difficult time and this is unlikely to change unless "we see sustained uptick in their underlying demand factors".

Technology-related companies such as Valuetronics, AEM and Frencken, which have had good earnings and enjoyed very strong share price rallies recently, are expected to continue their winning streak in this quarter, said Mr Van Broekhoven.

On S-Reits, CGS-CIMB's Ms Lim said that as the prospect of further rate cuts diminishes and upside catalysts reflected in the compressed yield spread, the sector could perform in line with the broader market.

RHB's Mr Seet noted the strong performance of Unusual Ltd for the recent quarter and singled out the production and promotion service provider for events and concerts as "a company to watch out for".

He said: "Due to the stronger pipeline of events... and expectation of more potential positive development in the concert and family entertainment space, we believe it will be a more solid quarter for the company."

China won't allow a TikTok 'smash and grab' by US, warns state media

[HONG KONG] China's government won't accept an acquisition of TikTok's US operations by Microsoft and may take...