Bargain hunters on prowl as STI plunges following US slump

Almost one in three of the 30 blue-chips that make up the index takes a hit, tumbles to new 52-week lows, but recovers later in the day
Lynette Tantanlyn@sph.com.sg@LynetteTanBT
PHOTO: THE BUSINESS TIMES

STI blue chips hit their lowest in a year

SINGAPORE'S market finally succumbed on Thursday, plunging to fresh yearly lows following a US slump overnight that saw the Dow and S&P 500 indices erase their 2018 gains and the Nasdaq enter correction territory.

Despite the wary mood, this period may be timely for some bargain hunters to throw caution to the wind and take the opportunity to fish for value stocks.

Almost a third of the 30 blue-chips that make up the STI took a hit, tumbling to new 52-week lows, but recovering later in the day.

Among those that picked up the most, Jardine C&C regained 3.13 per cent from Thursday's low of S$27.66 to S$28.55. Genting Singapore was the most actively traded counter, closing 2.89 per cent up from its intra-day low of about 86 cents, with over a million shares traded. 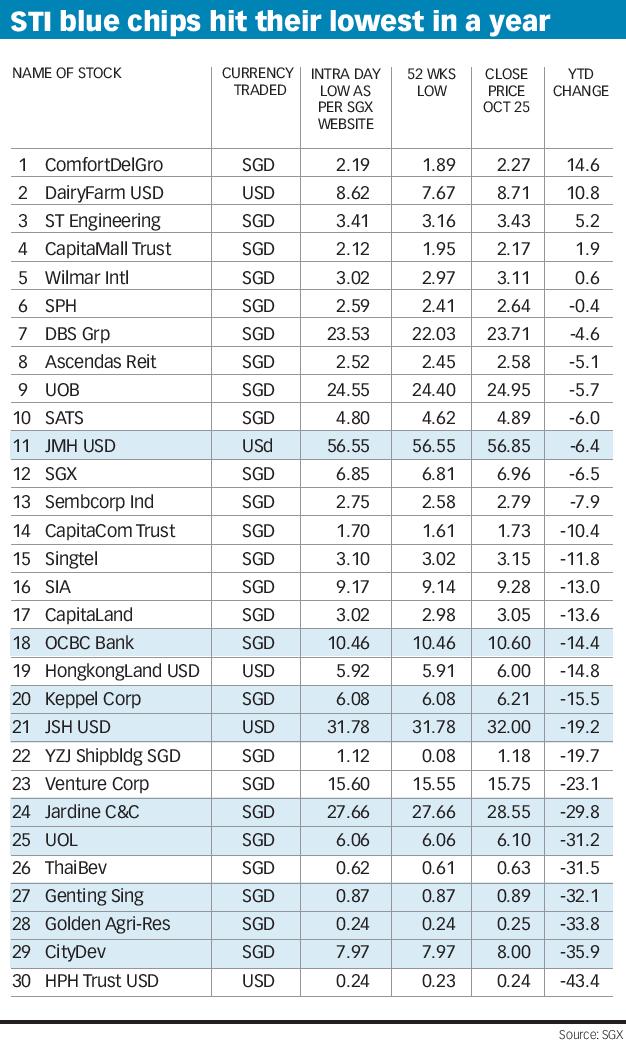 Remisier Charles Chua said investors were taking advantage of the equity sell-off to pick up bargains. In addition, local bank stocks have been singled out as rising interest rates are likely to add to the profitability of the banks' lending business, alongside expectations of positive showings in this season of earnings.

Joanne Goh, regional equity strategist at DBS Group Research,said the Singapore market remains attractively valued, supported by dividends. As a result, "there are still stocks to bargain hunt at this level, especially some of the more defensive consumer stocks and telcos".

CMC market analyst Margaret Yang said the Singapore market is "not expensive at the current level and dividend yields are getting attractive now".

That said, DBS' Ms Goh does not see signs of bottom fishing yet. "Investors concerns on slower growth, trade wars, US elections, oil prices, rising interest rates and the US market are likely to keep investors very risk averse."

However, should Singapore enter a bear market, like its Asian counterparts, that might open up further opportunities for value investors. Generally, a downturn of 20 per cent or more from a broad market index's peak over a two-month period is considered an entry into a bear market.

Based on valuations near the levels during the last low in 2016, Ms Goh predicted that the STI could test 2,800, representing about another 8 per cent to the downside.

When that happens, she believes defensive telcos and real estate investment trusts (REITs) are among the more resilient sectors, compared to cyclical sectors like banking and property, which are generally "more vulnerable in the recent sell-off due to overseas concerns on trade war and rising borrowing costs a major threat to global growth next year".

Within REITs, OCBC Investment Research head Carmen Lee emphasises defensive ones over those in cyclical sub-sectors such as hospitality, with preferred picks within the S-Reits space.

Regulated infrastructure industries also hold merit for their general resilience to cycles and trade dynamics, she said. Overall, "given that volatility could remain heightened in this stage of the cycle, we encourage investors to position their portfolios with a measure of defensiveness, while waiting for the stormy macro conditions to abate".

[NEW YORK] Doh Ouattara drove for Uber and Lyft from 2016 until mid-March of this year, when he became concerned...

[BEIJING] Chinese automaker GAC, which has partnered with Toyota, Honda and FCA, will stick to an annual target of 3...

Vietnam is Asia's best stock market performer in May

[HANOI] Vietnam has managed to repeat its success of containing a virus outbreak again, and that's helped drive the...

What are the odds of a socially distant Las Vegas?

[NEW YORK] For decades, the El Cortez Hotel & Casino in downtown Las Vegas has been known for single-deck...