Bargain hunters on the prowl for O&M assets

But players will have to wait for better margins
Tan Hwee Hweebtnews@sph.com.sg@HweetanBT
With oil prices stabilising at around US$50 per barrel, oil companies now have the needed visibility to revisit deferred upstream projects, though this has not led to a recovery in the embattled offshore and marine (O&M) sector - yet.
PHOTO: REUTERS

WITH oil prices stabilising at around US$50 per barrel, oil companies now have the needed visibility to revisit deferred upstream projects, though this has not led to a recovery in the embattled offshore and marine (O&M) sector - yet.

Industry watchers suggested that even with a rebound in upstream contracting now in sight, contractors can only look forward to improve their margins, at the earliest, in 2019.

Ian Craven, director of offshore drilling-focused Icarus Consultants, has projected that a recovery in rig day rates will not come before 2020. Separately, a forecast by market intelligence group IHS Markit also indicated that any recovery in rig and vessel day rates would be range-bound instead of shooting back to pre-crash levels.

Such views have not stopped some offshore drilling contractors from moving ahead of the curve in building or acquiring capacity.

Oslo-listed upstart Borr Drilling unveiled two separate deals in March and earlier this month, to acquire 14 jack-up rigs - five being built by Keppel Fels and nine others at Sembcorp Marine's PPL Shipyard. Of the nine PPL jack-ups, six were originally contracted by Oro Negro, Perisai Petroleum and Marco Polo Marine. At a total purchase price of US$1.3 billion, Borr Drilling is forking out roughly US$145 million per rig, regarded by Mr Craven as "realistic" compared to asking prices of US$180-US$210 million per jack-up from yards in China back in May.

Borr Drilling's deal with SembMarine came after the rig owner-operator bought five jack-ups that were originally built by Keppel Fels for Transocean. The bulk purchase prices the rigs at US$216 million per piece, compared to the contracted per rig price of US$219 million while Keppel Fels was serving Transocean.

IHS Markit's APAC head of research, Ang Dingli, said that an increasing optimism displayed by oil companies would have supported revival of upstream oil and gas projects that were deferred since the 2014 oil price crash.

Oil holding at above US$40 has certainly helped improve sentiments. But Mr Ang clarified however, with oil prices still at over 50 per cent discount from peak levels, cost control will be higher up on the agenda of oil companies when sanctioning projects. 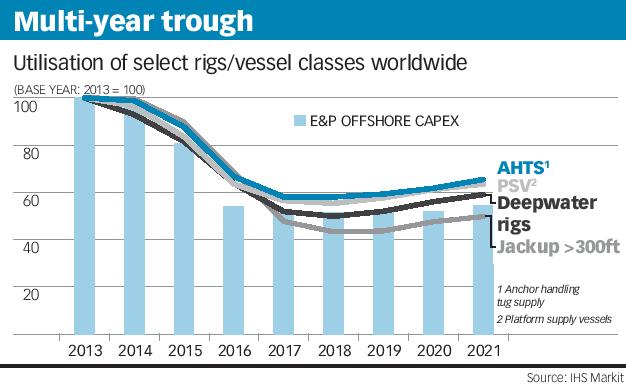 For a start, rig charter rates, as a key barometer for the health of the offshore and marine sector, are not seeing vast improvements.

Mr Craven noted for instance, in the Asia Pacific, jack-up rigs are still being contracted at between US$47,000 and US$55,000, similar to the levels six months ago and far from the pre-crash high in the US$200,000s. The exceptions to this, he said, are preferential contracts awarded by national oil companies to domestic rig owner-operators.

What is hampering recovery for rigs is that owner-operators cannot afford to raise charter rates when bidding for work because overcapacity remains a major concern. The Business Times has learnt a recent tender floated by India's Oil & Natural Gas Corp attracted a low bid of US$26,000 for jack-up day rate.

Mr Craven said that only 33 jack-ups have been scrapped in this O&M downturn when a rebalancing in the sub-sector is only possible if over 100 jack-up rigs were retired to make way for over 80 units scheduled for delivery from China and Singapore.

So even as Borr Drilling's opportunistic asset buys may have bolstered cash flows at the two Singapore-listed yard groups, analysts have raised one red flag amid an unresolved supply glut in the rig market: such deals could hurt rig-building margins.

SembMarine had acknowledged it would incur a loss of S$15 million from the transaction though the general consensus is the yard group is already done with the necessary provisions.

Before clinching the deal with SembMarine, Borr Drilling was also rumoured to have eyes on six jack-ups being built for various owners at Keppel O&M.

Further to this, an extrajudicial mediation between Petrobras and Sete Brasil is expected to shed light on the final number of deep-water rigs the latter would take delivery from SembMarine and Keppel O&M. Sete Brasil has six semi-submersible drilling units valued at US$4.9 billion on order at Keppel O&M and seven drillships valued at US$5.5 billion at SembMarine.

What also remains to be seen yet is whether Sete Brasil would take delivery of these rigs at the originally contracted prices.

Keppel O&M has entered into a black-out period and would not comment on the Borr Drilling market talk or updates for its Sete Brasil rigs. SembMarine also declined comment on Sete Brasil units, citing ongoing legal proceedings against the Brazilian rig owner-operator.

IHS Markit's Mr Ang estimated that the rig-building doldrums and a slowdown in sanctioning floating production projects has put 90 per cent of Sembmarine and Keppel O&M's revenue at risk.

Not helping too is increasing contest from China for FPSO (floating production, storage and offloading vessel) conversion and modification and jack-up rig building contracts (see chart).

Mr Ang applauded the yard groups' efforts at breaking into the liquefied natural gas segment, but he did not see revenue from such projects making up for the shortfall in rig-building orders anytime soon.

[BRUSSELS] A German app developer has filed a complaint with European Union antitrust authorities against Google and...

COLOMBO] Sri Lanka will conduct an investigation into allegations its troops committed war crimes during a conflict...

THE decline in retail rents gathered pace in the fourth quarter, taking the full-year drop in the Urban...