But they caution that main drivers are a low base and higher commodity prices, and that underlying fundamentals still recovering
Melissa Tanmelissat@sph.com.sg@MelissaTanBT
An improvement in the local economy and a rally in global commodity prices in the final three months of last year are likely to have lifted fourth-quarter corporate profits this round from a low base in the previous year, analysts say, adding that the first half of this year may see earnings bottom out and start to turn upwards.
ST PHOTO

AN improvement in the local economy and a rally in global commodity prices in the final three months of last year are likely to have lifted fourth-quarter corporate profits this round from a low base in the previous year, analysts say, adding that the first half of this year may see earnings bottom out and start to turn upwards.

But they warned that the lift might be cosmetic and that underlying fundamentals were still in convalescence. Banks and plantation companies are likely to have done a little better in Q4 while the offshore and marine industry and telcos may continue to disappoint, analysts said.

Singapore's gross domestic pro-duct (GDP) grew by a surprisingly healthy 1.8 per cent in October through December 2016 from the previous year, advance estimates from the Ministry of Trade and Industry in early January showed. That lifted full-year GDP growth to - coincidentally - 1.8 per cent, higher than the ministry's forecast of 1-1.5 per cent. Fuller estimates of Q4 and full-year 2016 growth will be released in February 2017.

Analysts said the better macroeconomic showing could translate to slightly better bottom lines here, though they said that if Q4 corporate earnings did improve year-on-year, the main drivers would likely be a base effect plus higher commodity prices, rather than the Singapore economy.

"Singapore stocks are likely to report strong earnings growth of 80 per cent year-on-year in Q4, mainly due to favorable base effect and sharp rally in the commodity prices," said Suresh Tantia, investment strategist at Credit Suisse.

"This would reflect a remarkable recovery from a 4 per cent year-on-year earnings decline witnessed in the Q3 2016 earnings season . . . The worst for Singapore market is clearly behind us as macro indicators have bottomed out."

Mr Tantia added that after two years of "earnings recession", he expected Singapore corporate earnings to "trough in H1 2017 as growth expectations for sectors like banks are bottoming out and the drag from the offshore marine sector is diminishing". However, he said the underlying profitability was still generally lower and earnings were expected to decline sequentially in Q4. 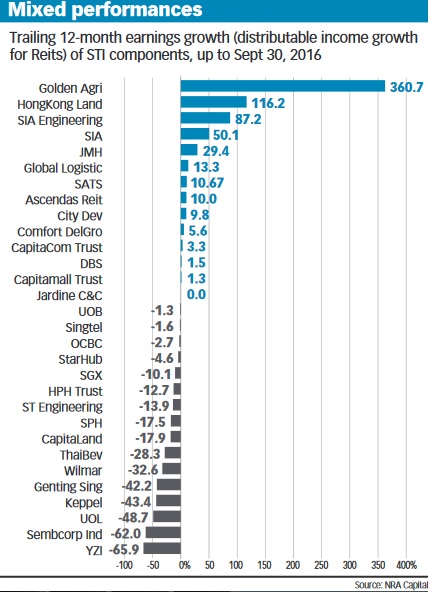 IG market strategist Pan Jingyi echoed this, saying that macroeconomic indicators from Singapore and the region "have shown improvements in the final quarter of the year and this could bring us slightly better results" compared with the "relatively dismal" set seen in Q3.

However, they stressed that only some segments of the Singapore stock market were likely to do better and underlying profitability was still weak. They were mostly positive on banks and plantation companies, and negative on local real estate companies.

"The quiet pick-up of the China economy and the recovery of certain commodity prices will help some companies to report higher earnings. However, certain sectors have continued to languish, such as Singapore property," NRA Capital research head Liu Jinshu.

"Sectors that I like are mainly those that will benefit from higher inflation. I would be more positive on the earnings of plantation and coal mining stocks. Some Chinese property firms may also outperform as curbs in the tier-1 cities have pushed demand to tier-2 cities," he said. "Stocks that I like include Geo Energy Resources and Ying Li International Real Estate. I would think these two stocks will do well for 4Q 2016."

CMC Markets analyst Margaret Yang said that she expected banks to post improved earnings for Q4 and the possible beginnings of a turnaround for offshore and marine companies, adding that rising interest rates would probably affect property developers and real estate investment trusts (Reits) while a rally in crude oil prices might take a toll on airlines.

Credit Suisse's Mr Tantia added that he expected local consumer and industrial sector stocks to post a "strong earnings recovery" due to the rally in commodity prices, but that telecommunications companies "could continue to disappoint the market as intensifying competition and the threat from a potential entry of a fourth mobile operator have led to a price war in the industry which is eroding company margins".

He disagreed with the rest on banks, saying that he expected bank earnings to fall in Q4 "as they build provision buffers to safeguard against asset quality risks", though he added that the market's focus was more "likely to be on their 2017 guidance as net interest margins are expected to expand in a rising interest rate environment".

Aveva is in exclusive talks to buy SoftBank-backed OSIsoft

[CAMBRIDGE] Aveva Group is in advanced talks to acquire industrial software maker OSIsoft for about US$5 billion,...

[REYKJAVIK] The first country in the world to certify equal pay between the genders is floating the idea of a "...

Hollywood studios unlikely to buy movie chains, even if they can