Loan growth likely to be moderate in 2020, with mortgage loans declining for third straight quarter
Vivien Shiaovshiao@sph.com.sg@VivienShiaoBT
South-east Asia's largest lender DBS will not be able to meet its 2019 net interest margin (NIM) growth forecast that it had guided for earlier, as the three interest rate cuts by the US Federal Reserve this year took the bank by surprise.
PHOTO: REUTERS

SOUTH-EAST Asia's largest lender DBS will not be able to meet its 2019 net interest margin (NIM) growth forecast that it had guided for earlier, as the three interest rate cuts by the US Federal Reserve this year took the bank by surprise.

In its third-quarter results briefing on Monday, DBS chief executive Piyush Gupta said the bank had expected only two rate cuts this year.

As a result, DBS is now likely to end up with full-year NIM growth of about three basis points, or 0.03 per cent - below its earlier expectations of a mid-single digit basis point expansion.

NIM is expected to be further compressed with a decline of seven basis points next year, assuming that there is one more Fed rate cut in mid-2020, he added.

NIMs are a key gauge of profitability for banks, measuring the difference between income earned from loans and the interest paid to depositors.

The Singapore Interbank Offered Rate (Sibor) tends to move in line with the Fed's rate movement, albeit at a slower pace. With the Sibor falling since August, analysts have been expecting DBS to be the most affected among the three local banks; its earnings is known to be the most sensitive to changes in the interest rate, partly due to its larger, slow-to-reprice current and savings account funding base.

Loan growth, which was flat quarter on quarter in Q3 on the back of the global slowdown from the US-China trade war, will likely be modest going into 2020. This comes as mortgage loans declined for a third straight quarter.

"We were actually surprised to the downside, because our original estimate was that the mortgage market would start increasing in the third quarter," he noted. 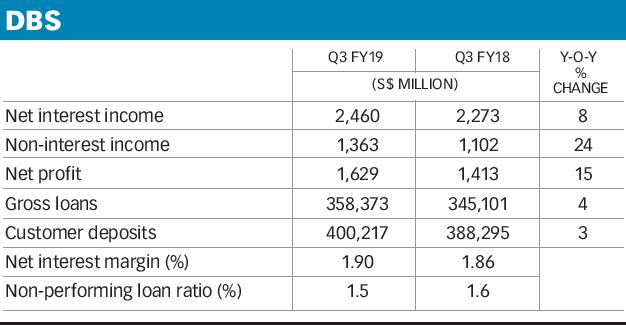 For this year and the next, overall loans are expected to grow at a more subdued 4 per cent from the interest rate impact, slower than the 6 per cent growth last year.

Net profit for the three months ended Sept 30 rose 15 per cent to S$1.63 billion, up from S$1.41 billion a year ago. This was higher than the S$1.57 billion consensus forecast in a Refinitiv survey of five analysts.

This translated to annualised earnings per share of S$2.50 for the quarter, up from S$2.16 a year ago.

The lender declared an interim one-tier tax-exempt dividend of 30 Singapore cents for the third quarter. It will be paid on Nov 29, after the books are closed on Nov 19.

Net interest income for Q3 grew 8 per cent on the year to S$2.46 billion, on a 4 per cent growth in loans led by non-trade corporate loans.

Third-quarter NIM rose four basis points from a year ago, little changed from the previous quarter at 1.9 per cent.

Other non-interest income surged 35 per cent to S$549 million for the quarter, driven by higher trading income and gains on investment securities.

The bank's non-performing loans (NPL) ratio held steady at 1.5 per cent, even as total allowances grew by 8 per cent to S$254 million for Q3.

The latter comes as general allowances of S$61 million were taken during Q3 as a "prudent measure given the ongoing political and economic uncertainty", due mainly to the situation in Hong Kong.

Despite the more cautious outlook for Hong Kong, Mr Gupta noted that its results in Q3 was "remarkably resilient". There was a slowdown in trade, but income still held up "pretty well", he said.

Even as Chinese tourism to the city remains a wildcard, the capital markets in Hong Kong remain active and there are still opportunities in the Greater Bay Area, he said.

DBS launched its digital banking offering in Hong Kong last week, aiming it at the affluent market. Early response was "good", he said.

He maintained that the bank is still "relatively upbeat" about Hong Kong's prospects, and expects its performance to be in line with the rest of the group with low single-digit loan growth rates going forward.

With NIM expected to narrow and loan growth to hold steady, the bank is anticipating income growth in the low-single digits in 2020, to be driven largely by its fee income, in particular wealth management, as the momentum remains strong.

"All in all, given the global environment and interest rate headwinds, we are still quietly optimistic that we should be able to continue to deliver decent performance into next year," said Mr Gupta.