DBS outperforms in Q4; hunkers down to tackle impact from virus outbreak

Vivien Shiaovshiao@sph.com.sg@VivienShiaoBT
Singapore's largest bank opened the results season for the local trio on Thursday with its prognosis of the impact of the novel coronavirus (Covid-19) on its earnings ahead.
PHOTO: ST FILE

SINGAPORE'S largest bank opened the results season for the local trio on Thursday with its prognosis of the impact of the novel coronavirus (Covid-19) on its earnings ahead.

With the virus outbreak hurting key industries such as tourism, DBS Group CEO Piyush Gupta sees lower revenue of around 1-2 per cent in 2020, with permanent demand displacement from sectors including travel, hospitality and aviation this year.

In a media briefing on Thursday as DBS announced Q4 results that beat expectations, and a higher annualised dividend per share from a year ago, Mr Gupta said that prior to the virus outbreak, the bank was on track to its previous guidance for FY2020, or a mid-single digit loan growth rate.

Now, DBS foresees the impact to last a quarter - similar to the situation in 2003 during the severe acute respiratory syndrome (Sars) crisis.

Specific provisions could also potentially rise by a few basis points of loans, in addition to the impact on top line, he added. 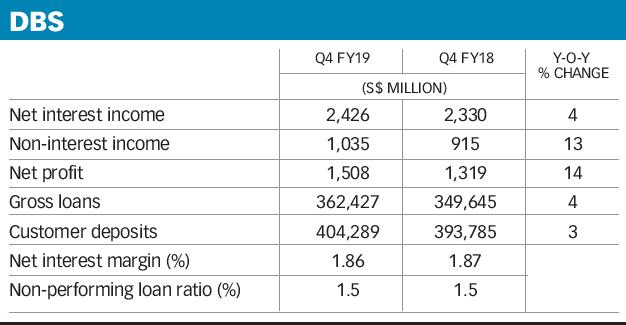 Revenue headwinds are likely to come from a slowing card business as spending declines, and easing wealth management and treasury sales, particularly from the small and medium-sized enterprise (SME) segment.

The impact on the consumer consumption or services sector, particularly those in travel, hospitality and aviation, is one of his biggest concerns. "This sector is likely to see more permanent revenue loss which will impact their numbers for this year," he said. "It's not just a shift by three to four months."

DBS's total portfolio for this sector in Singapore, Hong Kong and China is about S$20 billion, with the majority of it in Singapore. Within this portfolio, 90 per cent of them are large companies which Mr Gupta deems as "very resilient".

These large companies will be able to take "a few months of cashflow shortfall", even as the bank has been managing this portfolio very judiciously over the past year, he added.

Mr Gupta pointed out that the bank's general provisions (GP) over the year has been "very robust" as it had earlier set aside a cushion for issues such as the US-China trade war and the slowdown in Hong Kong.

"With a little bit of luck, I don't think we'll see an impact on the cost of credit flowing through the P&L (profit and loss statement) because of the GP," he said.

The bank also announced some relief measures for SMEs with a good repayment history that apply for liquidity relief from the bank.

This includes a six-month moratorium on principal repayment for SME property loans in Singapore and Hong Kong, and an extension of import facilities of up to 60 days to act as immediate cashflow support for businesses coping with disruptions due to the virus outbreak.

The measures come on the back of a 14 per cent rise in net profit for the fourth quarter to S$1.51 billion from a year ago, reflecting broad-based business momentum. That was a touch stronger than the S$1.49 billion average estimate of five analysts surveyed by Bloomberg.

Annualised earnings per share stood at S$2.31 for the quarter, up from S$2.01 previously.

The lender recommended a final quarterly dividend of 33 Singapore cents per share, bringing the full-year payout to S$1.23 per share. On an annualised basis, dividend per share stood at S$1.32 - an increase of 10 per cent from a year ago. If approved by shareholders, the dividends will be paid on April 21.

In a note, Citi analyst Robert Kong said the bank's higher annualised full-year dividend per share and its common equity tier one ratio (CET1) ratio of 14.1 per cent are important for share price support given "ongoing macro uncertainties". CETI refers to a bank's capital strength.

In Q4, DBS's total income increased 7 per cent on the year to S$3.46 billion from loan growth and a double-digit improvement in fee income.

Net interest income rose 4 per cent from a year ago to S$2.43 billion, while loans also grew 4 per cent in constant-currency terms. Net interest margin (NIM) was little changed from a year ago at 1.86 per cent, but fell four basis points (bps) from the previous quarter due to lower interest rates. NIMs are a key gauge of profitability for banks, measuring the difference between income earned from loans and the interest paid to depositors.

Net fee income grew 17 per cent from a year ago to S$741 million, led by wealth management and investment banking fees.

Other non-interest income rose 5 per cent year on year to S$294 million due to higher gains on investment securities.

On a full-year basis, DBS recorded a 14 per cent jump in net profit to S$6.39 billion, while total income rose 10 per cent to reach a new high of S$14.54 billion, again from broad-based business momentum.

Full-year net interest income increased 7 per cent to S$9.63 billion. NIM was four basis points higher at 1.89 per cent as an increasing margin in the first half was moderated by the impact of declining interest rates in the second half.

The results come a day after DBS confirmed that one employee working at the bank's main Marina Bay Financial Centre office has been infected with the novel coronavirus, resulting in all DBS employees on the affected floor - understood to be less than 200 - to vacate the premises.

Mr Gupta said there has been "minimal disruption" in the bank's operations. The bank has implemented a split-team and work-from-home system for its employees.

Singapore shares sink further on Friday, tumble 5.3% on the week

SINGAPORE equities faced heavy selling on Friday en route to their worst weekly performance since August 2011 as the...

WITH travel demand slumping amid the Covid-19 outbreak, Singapore Airlines (SIA) will be cutting salaries of senior...