Bank proposes bumper 2017 special dividend and doubling of final dividend. It says annual dividend will be S$1.20 a share from this year
Siow Li Senlisen@sph.com.sg@SiowLiSenBT
DBS Group shareholders got an early hongbao on Thursday: the bank reported record profits and proposed a huge jump in dividend payout - both in its final dividend and also annual payouts henceforth.
PHOTO: REUTERS

DBS Group shareholders got an early hongbao on Thursday: the bank reported record profits and proposed a huge jump in dividend payout - both in its final dividend and also annual payouts henceforth.

The dividends go out on May 15.

In addition, DBS said it will pay S$1.20 per share in annual dividends from this year - double its payout in three of the past four years.

The news sent DBS shares soaring 5.3 per cent to close at S$26.71; it was the main contributor to the surge on the Straits Times Index (STI); 27 of the benchmark index's 32-point jump came from the bank.

In addition to an interim dividend of 33 Singapore cents per share that has already been paid out, the full-year payout for 2017 will be S$1.43 per share, compared with 60 Singapore cents in 2016.

And from this year, DBS will pay S$1.20 per share in dividends. 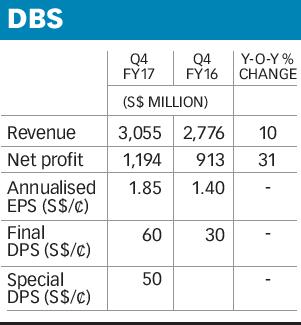 DBS said the policy of paying out the higher annual dividend is a result of the finalisation of Basel capital reforms, which provided clarity on future regulatory requirements. "They have a benign impact on DBS, enabling its capital requirements to be rationalised," it said.

The bank has therefore suspended the scrip dividend with immediate effect, and determined that ordinary dividends can be sustained at higher levels and increased over time with earnings growth.

DBS chief executive Piyush Gupta said at the media briefing on the bank's earnings: "We've got back to being a fairly high-yield stock at this point in time."

Chief financial officer Chng Sok Hui said that as of Wednesday, the yield for DBS' stock is about 4.5 per cent. 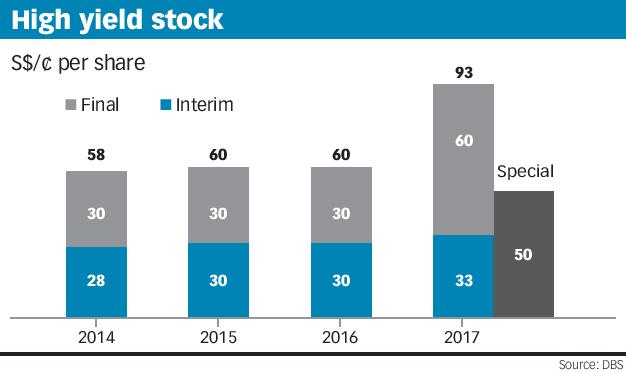 For the fourth quarter, total income rose 10 per cent to S$3.06 billion, staying above the S$3 billion mark for the second consecutive quarter, as net interest income rose 15 per cent to cross the S$2 billion mark for the first time. Total allowances halved. Net interest margin improved seven basis points to 1.78 per cent, in line with higher Singapore-dollar interest rates. Loans, including those from the consolidation of ANZ, rose 7 per cent. DBS bought over ANZ's wealth management and retail banking business in Singapore, Hong Kong, China, Taiwan and Indonesia.

Net fee income grew 23 per cent to S$636 million. The increase was across most fee income streams and led by wealth management and investment banking. Other non-interest income fell 26 per cent to S$322 million as weaker trading income was partially offset by an increase in net gain on investment securities.

Expenses increased 11 per cent to S$1.36 billion due to higher marketing and technology costs and the consolidation of ANZ.

Mr Gupta said he sees the deep exploration sector to be structurally impaired, and that it is unlikely oil prices will hit US$80 a barrel. But the bank will not exit the oil and gas space, where it has more than 100 clients, and remains an active participant in customers' restructuring, he said.

Mr Gupta said he is "fairly confident about 2018" amid a robust global economic environment.

Loans should grow 7 to 8 per cent this year and he expects improving interest rates to boost the bank's net interest margin, which should result in low double-digit growth for the bank's income.

In particular, he pointed to the bank's mortgage market-share growth to 30.8 per cent, up from 28.7 per cent a year ago. Of the 2.1 percentage point increase, 1 per cent was from organic growth, and the rest from ANZ, he said.

The market has "not seen 30 per cent market share ever", he said.

New home loan bookings in Q4 shot past S$2 billion; it was S$12.4 billion for the whole of last year, he said.

Wealth management was another strong performer, fees were up 44 per cent to S$227 million in Q4 and 35 per cent higher to S$966 million for the full year.

Assets under management (AUM) rose 24 per cent on year to S$206 billion, of which S$145 billion came from high-net-worth customers defined as those who have more than S$1.5 million with the bank. Mr Gupta noted that AUM growth was in line with UBS.

Net new money rose at a faster 60 per cent, excluding ANZ; including ANZ, it was up 140 per cent, he said, adding that it was far stronger than its competitors. Last month, the world's largest private bank UBS said its Wealth Management Asia-Pacific unit recorded AUM growth of 28 per cent; its net new money surged by 37 per cent.

[SHENZHEN] Huawei founder Ren Zhengfei called on employees of its departing Honor subbrand to strive to surpass its...

Asia: Markets ease back as investors take breath after rally

[HONG KONG] Asian markets drifted on Friday as investors took their feet off the pedal after rallying for the past...