DBS, UOB shares up on conservative provisions; OCBC rises ahead of results

Kelly Ngkellyng@sph.com.sg@KellyNgBT
Shares of local banking trio rose on Thursday, as investors found some cheer from conservative provisions set aside by DBS and UOB and an unchanged outlook guidance in their latest quarterly results released before market open.
ST PHOTO: CHONG JUN LIANG

The good in bad

SHARES of local banking trio rose on Thursday, as investors found some cheer from conservative provisions set aside by DBS and UOB and an unchanged outlook guidance in their latest quarterly results released before market open.

DBS reported a 22 per cent fall in second-quarter net profit to S$1.25 billion for the three months ended June 30, compared to the year-ago quarter. This is slightly under the consensus forecast of S$1.31 billion in net income from three analysts in a Bloomberg poll.

UOB posted a 40 per cent drop in second-quarter net profit to S$703 million compared with a year ago. Likewise, this was weaker than the consensus forecast of S$815 million in net income estimated by four analysts in a Bloomberg poll.

"We expect that they will maintain strong fundamentals in 2020-2021, despite some weakening in loan quality and profitability."

Analysts flagged in particular that higher provisions set aside by the two banks in their second-quarter results were guided largely the same as a quarter ago.

DBS's total general provisions as at the end of second quarter stood at S$3.8 billion, up from S$3.23 billion a quarter ago, with the bank's chief Piyush Gupta saying that the bank is building up a "substantial" general provision cushion because "nobody really knows what is going to be the extent of the damage once the (relief) programmes run out".

It kept its earlier guidance that credit costs are to rise to between S$3 billion and S$5 billion cumulatively over two years.

At UOB, total general provisions as at June 30 stood at S$2.39 billion, up 20 per cent from S$1.99 billion a quarter ago. The bank has guided for total provisions to remain between S$2 and S$3 billion for "the next few quarters". 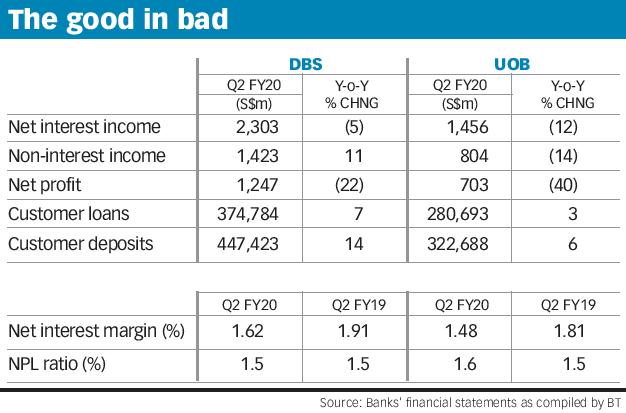 UOB is one the largest users of Enterprise Singapore's risk-sharing loan facility to support the bank's small and medium-sized enterprise (SME) customers, CEO Wee Ee Cheong said. He told reporters and analysts on Thursday that only half of the loans accepted by SME customers has been drawn down, signalling that their liquidity concerns are manageable.

"The tone from management doesn't seem to have deteriorated quarter on quarter, with signs of fee income returning in (the second half of the year) already seen," CLSA analysts said.

Jefferies equity analyst Krishna Guha noted that both banks saw margin drag, healthy trading gains and aggressive reserve builds in the quarter - all of which were in line with expectations.

"DBS fared better, in our view, on pre-provision operating profits due to revenue momentum and cost control," he wrote.

The analysts also noted a possible bottoming out of net interest margins (NIM) soon, with DBS's falling by 24 basis points (bps), and UOB's falling by 23 bps, from the first quarter of the year, as benchmark rates collapsed.

DBS reported a 1.62 per cent NIM for the second quarter, and CGS-CIMB analysts Andrea Choong and Lim Siew Khee flagged the bank's forecast for full-year margin to hover around 1.6 per cent. Its NIM fell to 1.62 per cent from 1.91 per cent a year ago, and 1.86 per cent a quarter ago.

However, analysts across the board noted a strong showing from the bank's non-investment income, buoyed by investment gains. Total non-interest income was up 11 per cent to S$1.42 billion.

Analysts from CLSA, CGS-CIMB and Jefferies also noted that the bank's net profit for the quarter was about 10 per cent weaker than consensus forecasts.

CLSA said this was largely due to higher provisions. They pointed out, however, that the bank's management appears "a touch more optimistic" about the second half of the year, with net interest margins expected to rise and as fees rebound.

[LONDON] British leisure group Whitbread, owner of Premier Inn hotels, announced Tuesday that it could axe up to 6,...

Are exotic skins out of fashion?

[STOCKHOLM] Something was clearly missing from Stockholm Fashion Week's virtual catwalk Aug 25 and it wasn't just a...

[FRANKFURT] TUI said it's making progress on plans to cut overhead costs by 30 per cent as the world's largest tour...

'Work from home': Johnson starts to shut down the UK again as Covid-19 spreads

[LONDON] British Prime Minister Boris Johnson will on Tuesday tell people to work from home and will impose new...