DEALMAKING in Singapore has increased by 4 per cent in 2017 year-to-date, the highest since 2014, with real estate taking the lead in deal values as Nesta Investment Holdings Ltd's proposed acquisition of Global Logistic Properties (GLP) gave the sector a boost.

This is according to Thomson Reuters' Singapore M&A (mergers and acquisitions) preliminary review for 2017, which examined deals from Jan 1 to Dec 15 this year.

Overall, Singapore M&A activity has reached US$89 billion so far this year, an increase of 4 per cent compared to 2016. A record high of US$93.7 billion was posted in 2014, Thomson Reuters said.

This year witnessed 18 deals which had values above US$1 billion, and these deals had a combined value of US$46.2 billion. There was also an increase in mid-market deals that ranged from US$50 million to less than US$1 billion deals.

In July, it was announced that Nesta Investment Holdings Ltd, a Chinese consortium, was acquiring GLP at S$3.38 per share in cash, valuing GLP at about S$16 billion. If the deal goes through, it will be the largest private equity buyout of an Asian company by enterprise value, surpassing last year's takeover of Chinese Internet security company Qihoo 360 Technology, according to data compiled by Bloomberg. 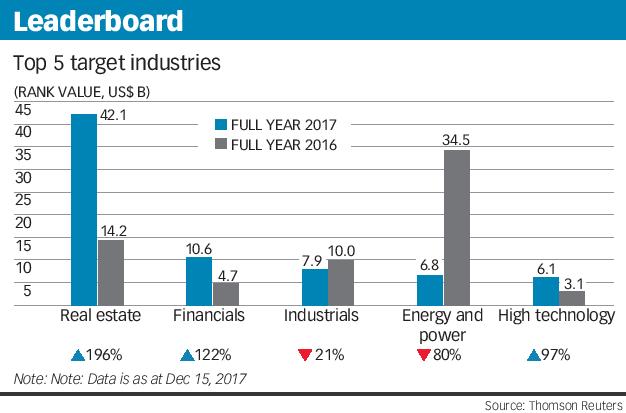 The real estate sector had a 47.3 per cent market share worth US$42.1 billion, up 195.7 per cent in terms of deal value from 2016, driven by the GLP deal. This is the highest-ever period for the sector in terms of value, surpassing the record annual value of US$35.2 billion set in 2014, Thomson Reuters said.

Besides the GLP deal, another pending acquisition among the top five listed by Thomsons Reuters include Grab Taxi Holdings Ltd's raising of US$2 billion from Didi Chuxing and SoftBank Group Corp, in what is known to be the largest venture fund-raising in South-east Asia by far.

Total cross-border deal activity in Singapore amounted to US$59.1 billion, a 58.6 per cent increase over the same period last year, the review found.

FRASERS Centrepoint Trust's (FCT) private placement has closed about 2.8 times subscribed and priced at the bottom...

[TOKYO] Asian stocks consolidated at the open on Tuesday amid end-of-month portfolio adjustments. The US dollar...

[NEW YORK] It's been more than a year since any company chose to go public via a direct listing. This week, there...