This reflects needs of the new economy; traditionally most independent directors tended to be from accounting, legal and banking sectors
Lee Meixianleemx@sph.com.sg@LeeMeixianBT
For instance, in April this year, DBS Group appointed Bonghan Cho, the founder and chief executive of Equalkey Corp, a South Korea-based artificial intelligence (AI) company, as a non-executive and independent director.
PHOTO: REUTERS

LISTED companies are adding digital voices to their boards to keep in tune with the evolving digital landscape and to better understand their competitors - the technological disruptors.

A compilation by The Business Times showed that seven blue-chip firms have appointed nine independent directors with digital expertise in the past four years.

These numbers are by no means big, but point towards an emerging trend of what management consulting firm Russell Reynolds Associates calls the "digital director" - defined as digitally-savvy directors either with experience from pure-play digital companies, or who have participated in the digital transformation of a traditional business.

For instance, in April this year, DBS Group appointed Bonghan Cho, the founder and chief executive of Equalkey Corp, a South Korea-based artificial intelligence (AI) company, as a non-executive and independent director.

In the same month, in a major board revamp, ComfortDelGro also announced the appointment of Ooi Beng Chin, Chair Professor of NUS' Department of Computer Science, who specialises in big data and artificial intelligence, as an independent non-executive director. Prof Ooi's research interests include database, blockchain, machine learning and large-scale analytics.

Chairman Lim Jit Poh said in an earlier media report that the company has to shore up the board with new expertise to prepare for the evolving landscape.

Besides DBS and ComfortDelGro, companies that have added such expertise in the past four years include Ascendas Reit, CapitaLand Commercial Trust (CCT), SATS, Singtel and Venture Corp (see table on Page 2). 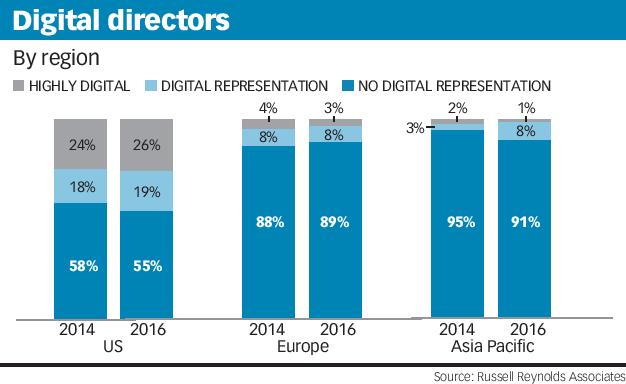 This is a marked shift, as traditionally, most independent directors have tended to hail from the accounting, legal and banking sectors, because such expertise is helpful for listed firms to deal with issues on compliance, financial reporting, accountability to shareholders and financing.

Nanyang Technological University accounting associate professor El'fred Boo said that this traditional group of directors helps to ensure proper accountability and discharge of management responsibilities, but the new breed of digital directors can provide strategic insight and look out for emerging threats and open doors to new opportunities.

He added that with more businesses increasingly disrupted by technology, including those not in the technology or digital sectors, demand for digital directors will likely grow even in non-IT sectors such as manufacturing, trading, retail, financial and banking, hospitality management, and food and beverage.

Joyce Koh, executive director of the Singapore Institute of Directors, noted that some sectors have adopted digital directors faster than others.

"The forerunners tend to be consumer-facing businesses like technology, media and communications, financial services and retail, but the B2B (business-to-business) markets are also gradually following," she said.

Late last year, Russell Reynolds did a study and found that of the top 300 companies in the US, Europe and Asia, just 18 had boards with two or more digitally-savvy directors.

Not surprisingly, half of these boards were from technology companies. As a whole, the US continues to account for the majority of digital director placements (76 per cent of new appointments in the past two years were to the boards of US firms), while there has been little to no change in European companies.

However, there has been a slight increase in the trend across Asia-Pacific boards. 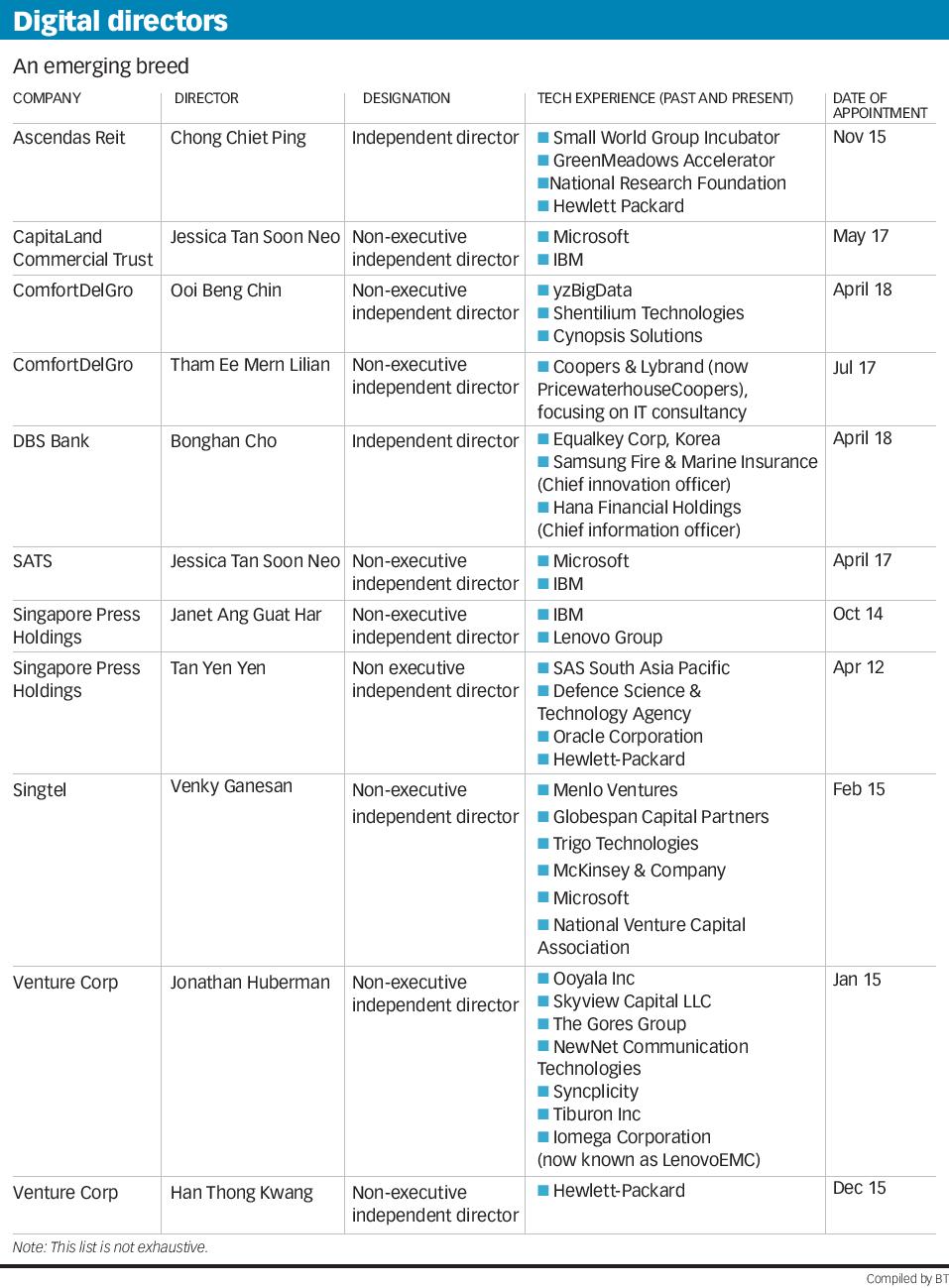 But Audrey Tan, managing director of Russell Reynolds, cautioned that while digital directors understand the digital space from a business and operating standpoint, they cannot be the only voice on the board on the subject of transformation. In any case, the distinction between digital versus non-digital directors is increasingly getting blurred.

"Executives across all industries are now digitally literate, if not fluent. As we transit into the hybrid phase of transformation, in which digital companies acquire brick-and-mortar businesses, and traditional businesses have been reorganised end-to-end, the definition of digital has become fragmented," she said.

She therefore counsels clients to be wary of "single-use" board members, as it is important for all directors to contribute to all governance matters.

"Ultimately, companies should look for leaders with strategic, general management backgrounds who can also speak with authority on customer perspective, vision and strategy, leadership and culture, and who bring commercial and investment acumen," she said.

Associate Professor Lawrence Loh from the National University of Singapore Business School, added that even the methodologies of traditional board functions such as audit and risk have changed to become more data-intensive and "digitally based".

The in-demand tech expertise from digital directors has also evolved from application software and development and system integration to the "ABCD" technologies of AI, blockchain, cloud computing, and data science.

But not everyone agrees that the emergence of the digital director is a firm trend, or that it will catch on across the listed universe.

Lim Wei Wei, partner at Baker Tilly TFW, for instance, does not think that IT expertise is in high demand on boards. He believes that other skillsets for directors such as sound business acumen, strong knowledge of corporate governance, and an ability to identify industry trends take precedence over IT expertise, which can often times be acquired through hiring an expert in the IT field.

"At the board level, especially with a lot of these big caps, the preoccupation is more with long-term strategies. Some of these data analytics are actually more of a supporting role to the information needs.

"I don't see their experience in big data as helping the board because board directors are usually more about the big picture, as opposed to delving into data extraction and trying to identify trends to report to top management, for instance. IT expertise is more micro compared to the board director roles."

But he conceded that there could be strategic reasons companies appoint digital directors, for instance when companies in certain sectors stand at risk of disruption threat by a technology player.

So for ComfortDelGro, it could be the realisation that its competitors are now tech-based, and there is a need to understand the way they function. A digital director could therefore guide the discussion of business strategies on the board, he said.

For DBS, which is hedging its disruption threat by investing in start-ups, it would help to appoint a director from the start-up circle who can tell a good start-up from a bad one, or has industry connections that can lead to good acquisitions and partnerships for the bank, he added.