An off-the-shelf online marketplace for businesses

That's thanks to the two co-founders of Arcadier.
Tan Effietaneffie@sph.com.sg
Mr Ranasinghe and Mr Low realised that there were "a lot of small guys" who wanted an online marketplace, but "didn't have the funds to do it".
PHOTO: AIDAN LOO

A CLOSED meeting with the president of PayPal brought together two men - Dinuke Ranasinghe and Kenneth Low. They were senior executives of PayPal then. "Think about (payments) going offline," the president said.

Little did they know that sentence would spark a bigger idea, and a greater revelation: It was not about making payments go offline. It was about merchants being discovered online.

Thus, the birth of Arcadier - a provider of online marketplaces, created within minutes.

Mr Ranasinghe, Arcadier's co-founder and chief executive officer, said: "What we've done is create an online marketplace that you can (tap to) create (your own marketplace) using an off-the-shelf solution. So in the layman's term, it's a do-it-yourself marketplace."

He went on to talk about how most businesses had websites with "a lot of information" but "no one finds them".

"(So) the natural thing to do is for them to join marketplaces, because of the consumer. It's easy (for the consumers) to find one location across multiple merchants (and) multiple products at one time," said Mr Ranasinghe.

He added that most people confuse an online store with a marketplace and highlighted the difference between the two - online stores have thousands of solutions or products that consumers are allowed to access, whereas an online marketplace is an aggregation of both buyers and sellers.

Moving on, in its earlier stages of development, the biggest hurdle that Arcadier had to cross was building itself up from scratch because they did not have "a platform to copy". Mr Ranasinghe said: "We've had to learn and fail, start again, take our own lessons, and then improve. So, the hardest part has been teaching ourselves how to do this."

The company started out in 2013 with a few prototypes, which helped to raise some funds to improve its technology. In 2014 and 2015, it launched a number of enterprise marketplaces across the world, some of which include America, Australia, and China. Those were big customers for the company, but through that period, the pair realised that there were "a lot of small guys" who wanted a marketplace, but "didn't have the funds to do it".

Mr Low, Arcadier's co-founder and chief commercial officer, said: "We started to understand the market and created a self-serve solution. It's always a journey with tech startups, but you have to react as soon as you can to market feedback."

The pair also identified that the market was moving towards the trend of becoming smaller and more focused, with marketplaces in different industries catering to the specific and personalised needs of the consumer. Some examples of these marketplaces are AirBnb, Uber and foodpanda.

"In the old days, it's about all these big horizontal marketplaces where everyone's on the list. (But) what you're starting to see is getting more hyper-local and hyper-vertical," said Mr Low.

This gave them reason to believe that the merchants should focus on how to serve their customers, instead of worrying themselves over the backend solution of building their own marketplace technology which not only takes up time, but could also cost up to millions.

"So for us, staying ahead of that (the trend) is providing a commoditised product (to the merchants). Don't spend tens or hundreds of dollars building it. Spend a couple hundred (on our technology instead)," Mr Ranasinghe continued.

The goal for Arcadier this year is to democratise marketplaces so that anyone who wanted to "build the next carousel" can do it quickly and inexpensively. Currently, the public beta has over a hundred sign-ups despite the company's target of half a dozen clients.

Mr Ranasinghe commented: "Without any promotion about our technology, people have found us because there's a need in the market. And so we know the market is ready for us. Now it's about getting funding so we can scale."

Over the past three years, Arcadier raised about three million dollars in capital. Some of the funds came from their pockets and family trusts, but most of them, according to the pair, came from high net worth individuals whom they met through connections.

The funds were used for testing and building the technology. However, there remains a huge problem. According to Mr Low, the government is trying its best to make Singapore a technology hub, but for the industry here, understanding and investing in tech companies is still very nascent.

Apart from funding, another challenge that the company faces is the access to local talent because as an early stage company, it has to compete with other technology companies in Singapore.

"If you go out to the market and try to fight with Google, Paypal, and everyone whose offices are here, it's very hard to find talent. There are not many hungry young people," said Mr Low.

Arcadier currently has 40 employees who are distributed across three different countries, with its architecture team in Sydney, developers in Manila, and its headquarters in Singapore. It recently opened an office in the Silicon Valley in the US, with the help of International Enterprise Singapore (IE Singapore).

"We've actually had to operate this way to optimise costs," Mr Ranasinghe said.

When asked how they intended to overcome these challenges, Mr Low commented that Arcadier's internship programme helped attain some young talents. "There's only a certain type of personality of interns who are really keen on startups. We saw talent there (and) the really good ones, we convinced them to stay," he said. Senior roles are also given to these talents in the early stages of their careers to help them do better.

Mr Low added: "We've been very blessed that they've been with us for a long time."

In terms of funding, the company will focus on building strategy, taking the market, including investors, as it goes. With a number of venture capital firms keeping eyes on Arcadier, Mr Ranasinghe is "sure it'll all pile in" when the company shows its full potential. He added: "The 100 marketplaces which have signed up, that's a great milestone."

However, the pair does not intend to focus on revenue for now, as they do not wish to deviate from the course and become a services company, which, according to Mr Ranasinghe, is "not right" for its customers.

"Right now, we're getting the product right, making sure the (customer) segments are served (and targeted) properly. (Maybe) next year, we'll start generating revenues on the product."

As to where they see themselves in five years' time, Mr Low said: "We see that vision of driving greater efficiency for communities and businesses alike."

Adding on, Mr Ranasinghe said: "We see ourselves being the largest provider of marketplace technology in the world, and we'll measure that through the number of people using the platform.

"We also see ourselves helping the little guy who wants to create a marketplace, because it's healthy for the community to try and help people." 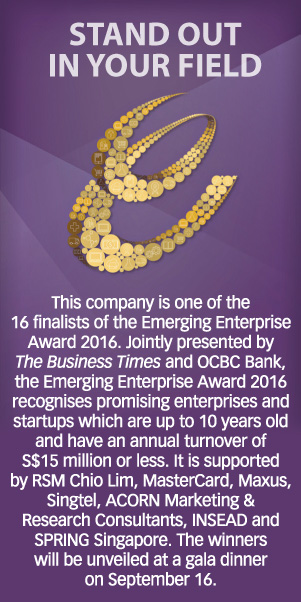 [SEOUL] Samsung Electronics reported a 59 per cent rise in quarterly operating profit on Thursday as US restrictions...

US Q4 growth could be even weaker than projected, likely to hit Canadian exports: bank governor

[OTTAWA] If US growth in the fourth quarter is even weaker than the Bank of Canada is predicting, Canadian exports...

[OTTAWA] The Bank of Canada is working with its G-7 partners on its plans for a digital currency, Governor Tiff...

[WASHINGTON] A former official in the US Department of Homeland Security revealed on Wednesday that he was "...