Sunny side up? Or omelette? Just tell the robot

But even as our smartphones become thinner and more and more startups take on the "Uber for..." mantle, we are on the cusp of the fourth industrial revolution with the rise of robotics, according to the wonks at the World Economic Forum in a January report.

And a homegrown startup, Kurve Automation, is well-poised - and eager - to join the fray. "We are so ready to take on the world," its founder and chief executive Hui Wing Feh tells The Business Times.

The three-year-old startup (it bills itself as a "design house with automation capabilities") designs, builds and sells robots that mechanises food manufacturing processes - from shaping the perfect dosai, to flipping an omelette and layering kueh lapis.

But its journey to "solely focusing on robotics" has been quite a roller coaster ride, Mr Hui says.

An electrical engineer by training, the 48-year-old previously ran an industrial design house, where he worked on projects such as the building a model of the Marina Barrage dam, and designing a window shade system for a condominium here.

Things took a turn in 2013, when Mr Hui kickstarted Kurve as he thought that automation "was the much bigger market".

For the first two years, he worked on a variety of briefs, including the design and building of payment and thumbprint-recognition kiosks for local gym chain Gymmboxx, and a semi-automated warehouse management system for fitness supplements retailer F1 Recreation.

But the restless entrepreneur soon found a "gap in the market" and decided to dip his toes in the water.

"I looked at food, and nobody was doing automation for that," Mr Hui says. "Then we realised that there was a gap because food automation was so difficult - there were so many unknown elements."

Undeterred, he set about sourcing for clients and it wasn't long before he landed his first brief: to develop an automated production line for kuay teow manufacturer Lau Boon Heng. That entailed mechanising the manufacturer's cutting, weighing and packaging lines with conveyer belts and the like.

It was his first foray into the F&B industry. Hooked on the opportunities that F&B could offer, Mr Hui set his sights squarely on the food automation business. In short order, he built a series of customised machines for a whole host of clients.

The systems ran the gamut, ranging from an automated tunnel oven system for baking tart shells to a self-stirring machine for a Peranakan restaurant to prepare redolent rempah. But despite cornering the market, there was a problem: profitability, or the lack thereof.

"When we went into food automation last year, we didn't make money," Mr Hui says. "We had to build the systems from scratch, which takes a long time … the business wasn't growing."

The situation was dire enough that he would have "gone bankrupt", Mr Hui adds, if not for the timely intervention of a familiar figure - enterprise development agency Spring Singapore.

Spring, which had supported some of Kurve's operations in the past (including the kway teow project), suggested that Mr Hui take up its Capability Development Grant (CDG) to venture into the field of robotics.

Says Mr Hui: "Last year, I really wanted to close the business. Then Spring came to look for me, and they said, 'Since you are doing food automation, why don't you look into robotics?' They told me they could support me via the CDG, to develop and buy robots. "Not only that, they started to link me up with all the robotics makers - that really opened up my mind, and in the end we went with Universal Robots."

Headquartered in Denmark, Universal Robots is the manufacturer of a six-axis robotic arm which has since "totally changed" his business model, Mr Hui adds.

After securing the local distribution rights to the Danish robot, the self-professed tinkerer discovered a way to customise the system for multiple tasks that "didn't require starting from scratch" for each project.

Instead of building customised solutions for individual clients like he did before, Mr Hui standardized his design and building process by having the robotic arm serve as the backbone of all of his designs.

To meet the different needs of his clients - from picking up a hotdog to slicing plastic packaging - Mr Hui customised the end effectors (the device at the end of a robotic arm that interacts with the environment) instead.

The beauty of the system he devised, he says, is that each robotic arm can be armed with a range of tools - from spatula to laser-cutter - that can be automatically slipped on and off via magnets, such that a single robot has the capability to handle a host of different skillsets.

And because the design and building process for each client is reduced to simply crafting the individual end effectors (some of the designs from past projects can be reused), his solutions are "significantly cheaper than most other robots" on the market.

"But our robot is productive, it's faster than a human, and it's cheap. So, got ROI one."

When queried on how he deals with critics of robotics - "They will take our jobs!" - if his robot can indeed outperform a human, Mr Hui smiles coyly.

Yet, barely a minute passes before Mr Hui stops in mid-conversation with a beatific-slash-thoughtful expression.

"Actually, my robot can cook better than a chef," he quips. "It is equipped with arms, eyes (a 3D vision system, which is being developed in partnership with Nanyang Polytechnic), legs (the system is fixed onto a linear belt actuator), a weighing module, temperature probes and an induction cooker - basically can do everything."

But for now, all that technology will be focused on mechanising a seemingly simple task: cooking eggs.

Kurve is in the midst of building an automated "egg breakfast buffet" robot, Mr Hui says, that will be able to crank out all manner of eggs - from the classic sunny side up to a wholesome, filling-laced omelette.

The robot, which is being built in Batu Pahat, Malaysia, is expected to be completed by the end of this month and will make its debut at an undisclosed hotel here.

And it is the hotel business that he will be targeting.

Noting that "most hotels will need to serve eggs" for breakfast, the entrepreneur expects that he will be able to sell "hundreds" of egg-slinging robots next year.

That translates to an expected profit of some S$10 million in 2017, Mr Hui says; in contrast, Kurve is expected to ring in about S$2.5 million in revenue for this year.

Expounding on his optimism, he adds: "This year, we spent most of the time developing the system - but now we are ready, very ready, to commercialise the system.

"Wouldn't it be nice if robots can actually free us from the boring tasks - like cooking eggs - so we can actually live life?" 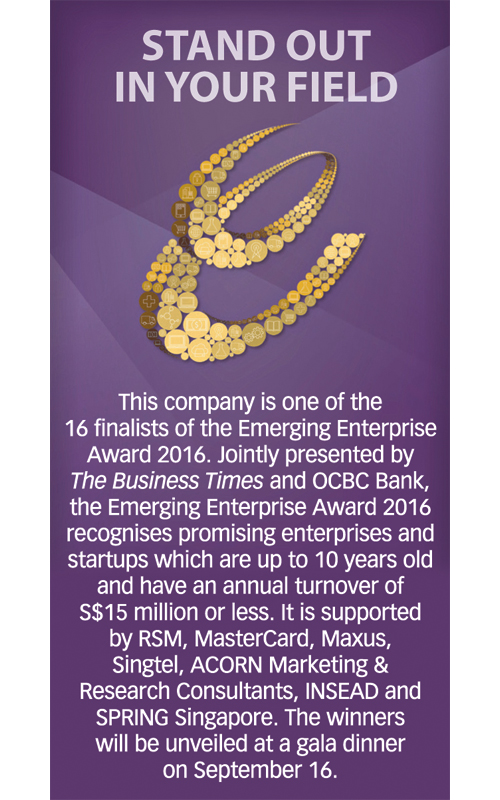 [FRANKFURT] German reinsurance giant Munich Re said Monday that it anticipates a boom in cyber-risk insurance in the...

[BRUSSELS] Angry European farmers are pushing for a ban on calling vegetarian products a "burger" or a "sausage"...

[LONDON] Britain and the European Union agreed on Monday to intensify trade talks and work on legal texts, a...