Analysts see tempered flow through to Singapore rates given expectations of rising local currency
Yasmine Yahyayasminey@sph.com.sg@YasmineYahyaBT
Regional markets declined and the US dollar weakened after the US Federal Reserve made a widely anticipated move to raise interest rates overnight on Wednesday (Singapore time).
PHOTO: REUTERS

REGIONAL markets declined and the US dollar weakened after the US Federal Reserve made a widely anticipated move to raise interest rates overnight on Wednesday (Singapore time).

The decision by the Fed to hike rates by 25 basis points to a range of 1.25 to 1.5 per cent came as the central bank said it expects faster economic growth and lower unemployment in the US next year.

This is the third time this year the Fed has raised rates, and the fifth since it slashed the rate to nearly zero during the financial crisis of 2008 and 2009.

Even as the move came as no surprise, analysts as always pored through the Fed's statement for more clues on its thinking that could hint at its future decisions.

This could account for the mixed market reaction after the hike, with the S&P 500 Index ending lower and the Dow Jones Industrial Average closing at a record high.

The greenback weakened against major currencies as well as the Singapore dollar, as investors were unexcited about the rate hike.

The sticking point in the Fed's outlook is inflation, which has continued to fall short of the central bank's 2-per cent target. In its Wednesday statement, the Fed's so-called "dot plot" of interest rate projections showed that the median forecast was for three rate rises next year. 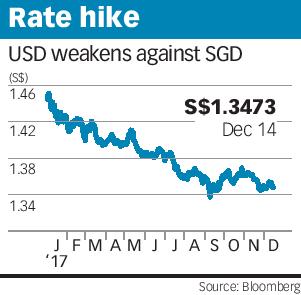 IG market strategist Pan Jingyi said the weak inflation is fuelling market doubt over the Fed's ability to hike rates that much in 2018. "The elusive inflation growth certainly seems to be the wedge between the Fed's three rate hikes and the market's expectation for about two hikes moving forward into the 2018," said IG market strategist Jingyi Pan.

CMC Markets analyst Margaret Yang said the regional malaise was likely due not to the Fed's move but to the People's Bank of China.

"The PBOC unexpectedly raised interest rates just a few hours after the Fed did. I think the Hong Kong and China markets in particular are shocked by this action," she said.

"Although the magnitude of the hike was not big, it sent a signal that China would follow the Fed's path of tightening monetary policy."

The global move towards a normalisation of interest rates will have its trickle down effect here eventually, economists said.

"Nonetheless, the trend of rising interest rates are unlikely to be reversed in the coming years and as such, mortgage servicing burden is expected to grow at the margin," he added. UOB's Mr Liew said: "After hugging the zero line for the past few years, global money market rates are now responding to the growing normalization of monetary policy and have started to head higher."

The three-month Sibor has climbed from just under 1 per cent in January this year to above 1.2 per cent this week, and is poised to rise toward 1.85 per cent by end of 2018, he added.

"Thus for 2018, based on a macro backdrop of continuation in the global growth story, subdued inflation and gradual monetary policy convergence, outright yield levels can be expected to adjust higher."

UOB has issued a S$120 million green loan to healthcare firm The Farrer Park Company to refinance the latter's...

[NEW YORK] Richard Branson is the latest billionaire to join the blank-cheque listing party after he sold his space...

[TOKYO] The Bank of Japan kept monetary policy steady on Thursday and slightly upgraded it view on the economy,...

Singapore exports rise by 7.7% in August as electronics recover from year-ago low base