THE one-off financial penalty and related costs arising from the global resolution of the Keppel Offshore & Marine (Keppel O&M) corruption scandal in Brazil has pushed the larger Keppel group into its first quarterly loss since 2003 when it first started quarterly reporting of its results.

Keppel Corporation sank into the red, with a net loss of S$495.8 million for the three months to Dec 31 last year. It was a significant reversal from a net profit of S$143.1 million in the corresponding period a year earlier.

The plunge was largely the result of a S$619 million charge relating to Keppel O&M's cross-border settlement with criminal authorities in the United States, Brazil and Singapore over corrupt payments made by a former agent in Brazil.

This sum included Keppel O&M's US$422.2 million (S$567 million) in fines, together with related legal, accounting and forensics costs.

Excluding the one-off charge, net profit would have come in at S$124 million, 13 per cent lower than previously.

Keppel said in its announcement on Thursday that the weaker quarterly showing was also due to poorer operating results from its offshore and marine division, although this was partially offset by higher profits from Singapore property trading and fair-value gains from assets.

Revenue dropped 20.4 per cent to S$1.54 billion, as turnover fell across all divisions, except infrastructure.

Excluding the one-off items, full-year net profit would have climbed 7 per cent to S$836 million, underpinned by earnings growth in the property, infrastructure and investments divisions. 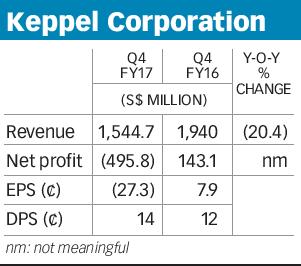 The property business accounted for the lion's share of Keppel's FY2017 earnings, registering a net profit of S$685 million, up from S$620 million a year ago.

In contrast, Keppel O&M incurred a loss of S$835 million compared to a net profit of S$29 million previously, in light of the financial penalty and related costs, as well as an additional provision of S$81 million for losses made on the Sete Brasil projects and S$54 million in impairment on other assets.

Keppel has proposed a final cash dividend of 14 Singapore cents for the fiscal year 2017, 16.7 per cent higher than the 12 Singapore cents for 2016. This excludes Keppel O&M's one-off financial penalty and related costs, which the group has said it will ring fence when considering dividend payouts.

Keppel chief executive Loh Chin Hua said at a results briefing that the global resolution reached by Keppel O&M over past misdeeds in Brazil "brings an end to what has been a painful chapter for Keppel - one that we have recognised and dealt firmly with".

"This is not Keppel. We care not just about results, but also how they are obtained."

Mr Loh, who was appointed CEO in January 2014 after having served as chief financial officer since 2012, said the board and management have thoroughly investigated the allegations and dealt with the issues uncovered. They have also put in place enhanced compliance controls - including comprehensive training and certification - to prevent any repeat of such misdeeds.

"Our core value of integrity prohibits Keppel from engaging in any unethical practices or behaviour. This is absolutely clear to me as CEO. We will not tolerate any behaviour or action from Keppelites that deviates from this fundamental principle," he said.

"The board and management are determined to regain the trust that has been lost.

"We will win business legally and ethically, based on our collective strengths of superior customer-centric solutions and good track record of execution."

Keppel shares closed 0.6 per cent or five Singapore cents lower at S$8.58 on Thursday before the results were announced.

READ MORE: Keppel has capabilities to win business within the law

Glencore Plc's agriculture unit has changed its name, a move that further distances the business from the world's...

[ATLANTA] No word as to whether Star Trek's Scotty "beamed it up", but the mysterious, shiny monolith that was...

[LONDON] Lloyds Banking Group has named the head of HSBC Holdings' wealth and personal banking unit as its new...

Green's Arcadia may file for insolvency as soon as Monday

[LONDON] Philip Green's Arcadia Group is poised to seek protection from creditors as soon as Monday and become the...