Excluding exceptional items, underlying net profit in H1 slips by 36.2% to S$837m in spite of q-o-q pick-up
Annabeth Leowleowhma@sph.com.sg@AnnabethLeowBT
Vivienne Tayvtay@sph.com.sg@VivienneTayBT
Singtel says it plans to review its dividend policy at the end of the financial year.
BT FILE PHOTO

SINGTEL'S management has not yet pinned down a turnaround trajectory for the mainboard-listed telco, despite calling itself "encouraged" by the latest quarter-on-quarter (q-o-q) growth.

Singtel on Thursday posted a net profit of S$466.1 million for the six months ended Sept 30, reversing a net loss of S$127 million a year ago.

This was mainly due to lower one-off losses compared with a year ago, from Singtel's S$1.93 billion pre-tax share of an exceptional provision by Indian telco associate Bharti Airtel.

But with exceptional items excluded, underlying net profit slipped by 36.2 per cent to S$837 million.

Operating revenue was down by 10.2 per cent to S$7.42 billion, with Singtel blaming structural headwinds from a fixed-line migration in Australia onto the lower-margin national broadband network (NBN) resale.

The fall in top line also came on a drop in equipment sales, as well as lower prepaid mobile revenue and a decline in higher-margin roaming traffic amid the Covid-19 pandemic. 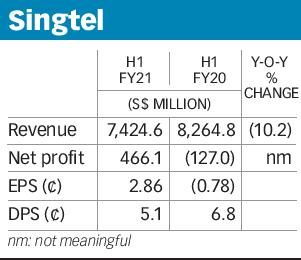 Outgoing Singtel chief executive Chua Sock Koong noted a q-o-q improvement from the April-to-June trough, but described the pick-up as "still quite tentative".

"Fingers crossed, if you don't see a significant deterioration in sentiment for whatever reason, we would expect the revenue recovery to continue," she told an earnings briefing. "Whether we would exceed the pre-pandemic levels is still to be seen."

Revenue fell largely across the board, with continuing erosion in enterprise carriage. Consumer postpaid mobile average revenue per user in Singapore, another key metric, slid 26 per cent year on year to S$29.

Still, the quarter-on-quarter trend also showed broad-based recovery, including a return to profitability by the group digital life segment, which had been loss-making in the first three months.

Singtel would not give a guidance on outlook, except to state that dividends from regional associates will be around S$1.3 billion and capital expenditure, including for 5G networks, will come to around S$2.2 billion.

When asked about potential topline uplift from the launch of 5G services, Ms Chua told the briefing that "we do expect higher revenues coming from 5G customers, but connectivity alone is not the 5G game" as new revenue sources are needed.

The directors have also approved the adoption of a scrip dividend scheme and the application of the scheme to the interim dividend.

The interim payout amounts to nearly all of the group's underlying earnings for the first half, although the full-year dividends are not expected to exceed underlying net profit.

Singtel added that it would review its dividend policy at the end of the financial year, "when there is more clarity on the impact of the Covid-19 pandemic on the group's businesses".

Citi analyst Arthur Pineda said in a report that, without roaming, revenues are not likely to normalise in the second half of the financial year "but we do see momentum moving in the right direction" as the worst is past.

The counter closed flat at S$2.23 on Thursday, after results were out.

A wholly-owned subsidiary of Keppel Corporation has entered into an agreement to undertake the development of its...

[TOKYO] Japanese companies have pared back year-end bonuses for employees by the most since the global financial...

Stock watch: 2020 stars and laggards likely to switch sides in 2021