Nisha Ramchandaninishar@sph.com.sg@Nisha_BT
The SIA group said it will continue to bank on its portfolio of airlines (Scoot, Tiger Airways and SilkAir) to cater to demand in different travel markets, while keeping a close eye on costs.
FILE PHOTO

SINGAPORE Airlines (SIA) found itself battling turbulence in its second quarter amid headwinds in the form of a sluggish economy, while excess capacity from its rivals put continued pressure on loads and yields.

Other factors weighing down the bottom line included lower dividends from long-term investments, a S$21 million impairment from two of Scoot's Boeing 777-200 aircraft and poorer results from associated companies, with contributions down S$18 million. The SIA group booked only S$3.5 million in dividends from long-term investments during the quarter, down sharply from S$91.1 million a year ago.

Revenue slid five per cent to S$3.65 billion, while earnings per share for the quarter fell to 5.5 Singapore cents, down from 18.3 cents a year ago. 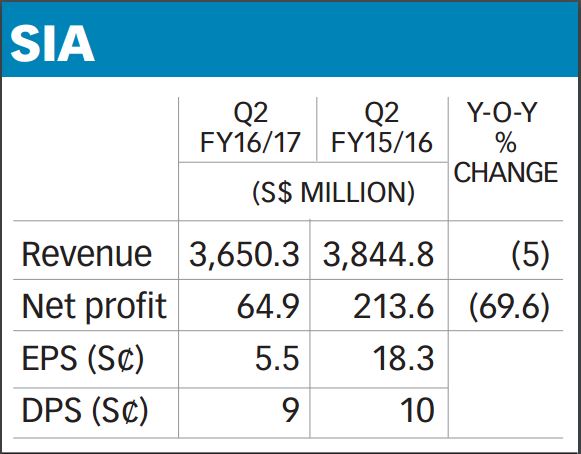 The national carrier said in its financial results, which were released after the market closed on Thursday: "The passenger airline business continues to be impacted by geopolitical uncertainty and weak global economic conditions. Furthermore, excess capacity and aggressive pricing continue to persist in the market, exerting pressure on loads and yields."

Rival airlines such as the cash-rich Gulf carriers have been pumping capacity into the market, especially on the European routes, which is causing competition to intensify.

For the quarter, a sharp drop in fuel costs helped bring expenditure down by S$174 million, but was still unable to offset the slump in revenue; this translated to a 15 per cent dive in operating profit to S$109.1 million.

Fuel costs totalled S$946.4 million during the quarter, down from S$1.21 billion a year ago.

Yields at the parent airline eased from 10.4 cents per passenger-km (pkm) to 10 cents/pkm. But budget carriers Scoot and Tiger Airways bucked the trend, thanks to a bigger network and lower operating expenditure.

Medium/long-haul budget carrier Scoot was in the black with an operating profit of S$5 million, a turnaround from a loss of S$2 million previously. Short-haul budget airline Tiger clocked a profit of S$3 million vis-a-vis a loss of S$10 million a year ago.

The results appeared to catch some analysts offguard; they had been banking on cheaper fuel to save the day. Macquarie Research had forecasted a 49 per cent jump in operating profit to S$192 million and a four per cent decline in revenue. Macquarie analyst Azita Nazrene wrote in a report dated Nov 2: "We expect its parent airline's operating profit to double to S$191 million from S$98 million in Q216."

Maybank Kim Eng's Mohshin Aziz had projected a Q2FY17 core net profit of S$193 million. "Long-haul traffic is under stress due to overcapacity and competitive pressures," he said in a report on Monday, cutting his target price to S$9.70. "Load factors have plummeted, especially to Europe and the Americas."

For the second half of the financial year, the group has hedged 29.3 per cent of its jet fuel requirement in Singapore Jet Kerosene (MOPS) and three per cent in Brent at weighted average prices of US$68 and US$63 per barrel respectively.

SIA said: "Fuel prices remain volatile, given the uncertainty over how the proposed cut in OPEC oil production would be implemented."

The group said it will continue to bank on its portfolio of airlines to cater to demand in different travel markets, while keeping a close eye on costs.

Cash and cash equivalents totalled S$3.28 billion at the end of the quarter, falling from S$4.6 billion a year ago.

Shares in SIA dipped two cents in trading on Thursday to close at S$10.11.

Aspen to move listing to SGX main board

CATALIST-LISTED Malaysian developer Aspen (Group) Holdings intends to transfer its listing to the main board, to...

[HONG KONG] China's Ant Group on Monday set the pricing for the Shanghai leg of its mega dual-listing at 68.8 yuan (...

SIA Engineering announces deals involving its investments in the Philippines

MAINBOARD-LISTED SIA Engineering Company has entered into two agreements with Cebu Air: one was to buy out the...

China to impose sanctions on US firms over Taiwan arms sales

[BRUSSELS] Fiat Chrysler and PSA are set to win EU approval for their US$38 billion merger to create the world's No...