It acknowledges US$170 million in impairment for its interests in EMAS Chiyoda Subsea
Tan Hwee Hweebtnews@sph.com.sg@HweetanBT
The pressure is mounting on Ezra Holdings from its creditors and trade payables, with the group having taken on a massive impairment charge for its interests in a subsea joint venture (JV).
PHOTO: EZRA HOLDINGS

Debts up, equity down

THE pressure is mounting on Ezra Holdings from its creditors and trade payables, with the group having taken on a massive impairment charge for its interests in a subsea joint venture (JV).

Its net current liabilities stand at US$887.22 million, and the group has more than US$1 billion in secured and unsecured borrowings, as well as debt securities repayable in a year or less.

The beleaguered offshore and marine group on Friday acknowledged some US$170 million in impairment for its interests in EMAS Chiyoda Subsea (ECS), following news that its Japanese partners had unveiled writedowns totalling 51 billion yen (S$635 million) tied to the JV.

Ezra said the US$170 million that may have to be written down comprised investment in shareholders' loans to and inter-company balances owed by ECS and its subsidiaries; the sum was derived from an assessment of the writedown and anticipated downgrade of investments in and loans extended to ECS and subsidiaries by JV partners Chiyoda Corp and NYK Line.

Chiyoda and NYK Line had on Tuesday issued warnings over one-time writedowns of 38 billion yen and 13 billion yen respectively, for their 35 per cent and 25 per cent interest in, and loans to ECS.

The announced US$170 million writedown fell short of an analyst's estimate. Maybank Kim Eng, in an internal research note, had pegged Ezra's share of ECS impairment at between US$185 million and US$385 million. (The range would be US$103 million to US$303 million in additional impairment, net of a US$81.9 million JV impairment in Ezra's FY16 financial statements.) 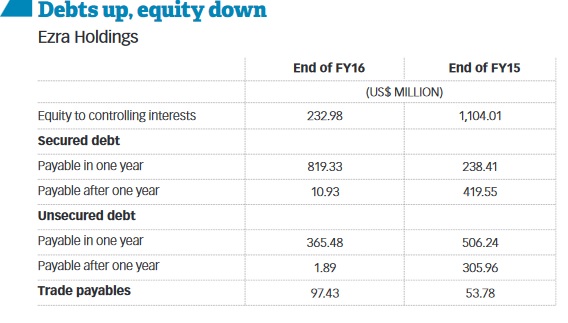 Ezra also acknowledged that, further to the writedown, it has occasionally received letters of demand and reservation-of-rights letters from counterparties, including a statutory demand issued by one of its lenders.

This situation echoes the run-up to the fall of Swiber Holdings last July; back then, trade creditors were issuing letters of demand to it, before the listed holding company reversed a winding-up petition in favour of entering into judicial management.

Ezra sought in its Friday statement to distance itself from claims filed by Bibby Offshore against ECS, saying that the group does not control ECS and has no dispute with Bibby.

Ezra said its subsea business unit had entered into a short-term stand-still agreement with Ocean Yield ASA, relating to the repayment of the bareboat charter of Lewek Connector, a multipurpose offshore vessel, in December 2016 and January 2017.

Separately, Forland Subsea had made demands on Ezra to make payment as the guarantor for the outstanding hire of Lewek Inspector; this happened when the subsea business unit started defaulting on payments in October 2016.

Forland Subsea has since reached a temporary deal with Emas AMC (now ECS) for Lewek Inspector to complete its project off Congo.

Secured borrowings and debt securities repayable in a year or less have grown from US$365.48 million to US$819.34 million.

Equity to controlling interest, by contrast, has fallen from US$1.1 billion to US$232.98 million.

This has spurred market talk that Ezra should have turned to a white knight investor to secure its future in light of the impairment on ECS.

Observers say the group's founding Lee family may pump in more equity, but many see a rights issue as unlikely to stir investor interest in these straits.

Jeremy Punnett of Stamford Maritime, noting the short-term debts on the group's books, said: "For Ezra to have any hope at pulling through this downturn, their bank lenders need to write off hundreds of millions of dollars in debt extended to the holding company."

Noteholders have granted Ezra clemency by waiving financial covenants to S$150 million notes due for redemption in April 2018. Benson Tay of iFast said the next interest repayment for these notes, at a 4.875 per cent coupon rate, is due in April.

Considering Ezra's tight cash position, he said: "Whether they have the cash to pay the interest is very likely up to the banks."

Ezra on Friday asked that the trading halt - in force since Tuesday - be lifted.

[SINGAPORE] The human resource manager of a Hyflux subsidiary has been charged with corruption on Wednesday.

GSM Building at 141 Middle Road has been launched for sale by tender, after the minimum consent level required for...

80 breaches found at purpose-built dorms annually for the past three years: MOM

[SINGAPORE] About 80 breaches each year have been found at purpose-built dormitories over the last three years,...

BreadTalk to delist from SGX on June 5

BREADTALK Group on Wednesday said the company will be delisted from the Singapore Exchange on June 5, 9am, following...

Google takes down Indian app that removed Chinese ones

[NEW DELHI] Alphabet's Google has taken down an Indian mobile application from its app store that allowed users to...