Rachel Muirachmui@sph.com.sg@RachelMuiBT
Shares of StarHub stirred to life on Thursday, boosted by news that Keppel Corp and Singapore Press Holdings are making a buyout offer for rival telco M1, in a deal which values the telco at over S$1.9 billion.
PHOTO: ST FILE

SHARES of StarHub stirred to life on Thursday, boosted by news that Keppel Corp and Singapore Press Holdings are making a buyout offer for rival telco M1, in a deal which values the telco at over S$1.9 billion.

StarHub closed the day at S$1.88 apiece, advancing 6.2 per cent, or 11 Singapore cents to reach its highest in 16 weeks. Some 15.1 million shares changed hands, making it one of the most actively traded counters on the local bourse for the day.

One analyst noted that a possible reason for the share price action on Thursday could be anticipation or hope that a similar transaction might take place for StarHub if its majority shareholders believe that the stock is undervalued, though there is no indication that this might happen.

Market observers also cited that uncertainty remains for industry incumbents in the short-term, with the impending arrival of the fourth telco, TPG Telecom.

Rush for data centres, telecoms towers may be boon for telcos

KGI analyst Joel Ng noted that the counter has declined 33 per cent since the start of the year, reflecting an "extremely competitive environment" for the local telcos. He added that shares of the whole sector have been under "intense pressure" ahead of TPG's entry. That said, the brokerage believes that the M1 offer could be a "re-rating catalyst" for the telcos, as they alter their business models, and accelerate their digital transformation strategies.

Noting that StarHub has slumped from its peak of about S$4.70 in 2013, UOB Kay Hian analyst Jonathan Koh told The Business Times that the latest deal involving M1 has "rekindled interest" in the sector, which has been oversold previously. He added that this could signal "the start of better things to come for the sector". 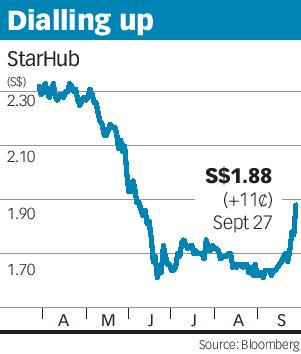 Shares of Singtel, Singapore's largest telco, rose 0.6 per cent, or two Singapore cents, to close at S$3.21 on Thursday.

UOB Kay Hian has issued a "buy" recommendation on StarHub, with a target price of S$1.92.

"Execution has improved since Peter Kaliaropoulos took over as CEO on July 9. Within two months of his appointment, StarHub has scaled up in cybersecurity ... ," Mr Koh highlighted in a research note dated Sept 25.

CONDO owners and management corporations (MCST) should exercise restraint in activating penalty clauses during the...