HSBC to move HQ to Marina Bay Financial Centre from 2020

HSBC Singapore will be relocating its head office from its current premises at HSBC Building, 21 Collyer Quay, to Marina Bay Financial Centre (MBFC) Tower 2 from April 2020 to accommodate the company's rapid growth plans.

The bank has said that it is planning a 10 per cent increase in its Singapore headcount across all business lines over the next three years. It has a current headcount of 3,100.

After the move, HSBC will occupy about 140,000 sq ft over the top floors of the 50-storey building. Fit-out work is expected to start in the second half of 2019, with target occupation by April 2020.

This is a smaller space than the 200,000 sq ft that it currently occupies, but HSBC Singapore's CEO Tony Cripps said that it can accommodate more people because of the more efficient floor plates and the open-plan workspace that the bank is shifting to, which will allow more efficient use of space.

At the same time, some of HSBC's operational staff will also move to its second site at Mapletree Business City at Pasir Panjang, where there are about 1,000 people currently.

HSBC is currently the sole tenant of the HSBC Building, a 21-storey office tower with a leasehold estate expiring in December 2849. HSBC had sold the building to the landlord CapitaLand Commercial Trust (CCT) in 2005 and leased it back. 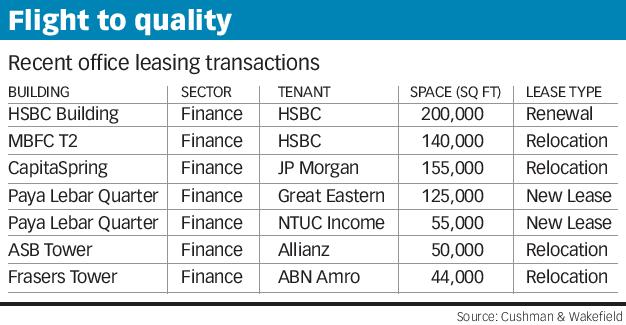 On Wednesday, CCT said HSBC had signed a one-year lease extension with the trust, and agreed to a rental of S$27.7 million, or S$11.54 psf per month - higher than the original rent of S$20.4 million per annum or S$8.50 psf per month - for the extended term from April next year.

HSBC has been located on the same site for the entire 140 years that it has been operating in Singapore, and has witnessed the teardown and redevelopment of the building all three times, the last one being in 1985.

In its new home, HSBC Singapore will have signage rights to the building. It will also be investing "substantially" in the new workplace to create an environment that is conducive to collaboration and encourages innovation and an entrepreneurial mindset, though it declined to divulge the investment amount.

Mr Cripps said that the bank wanted to upgrade the physical infrastructure to create a better work environment for its staff, but the aged building would need "a significant amount of infrastructure redevelopment" to get to the desired outcome.

"That's not something that we know about in terms of the intent of the owners of the building. Also, from a timing point of view, even if that were to happen, it would take quite a long time to rebuild or upgrade the infrastructure here, so this move to the new building actually means we can do the upgrade in about 12 months."

CCT had on Wednesday said it is evaluating options for the HSBC Building after 2020, which include refurbishment and reletting, redevelopment and divestment.

Mr Cripps added that he has personally experienced working in an open-plan workspace in Australia, and claimed that the business there saw 20 per cent productivity gains from open work, as people collaborate more across business units and there was a greater exchange of ideas.

Christine Li, senior director and head of research at property consultancy Cushman & Wakefield Singapore, noted that while cost has always been a major consideration, many businesses now prioritise the competition for talent over cost-cutting measures.

"Accordingly, they are willing to shell out extra for prime office spaces with plush fit-outs to secure top talent and boost productivity. These relocations are often expansionary due to the increasing trend of providing large break-out areas and leisure amenities which enable their staff to rejuvenate and resume work with heightened focus and clarity."

Year-to-date, the proportion of office space leased by banking and finance firms rose from 12 per cent in 2017 to 29 per cent in 2018, which shows that with better economic prospects, interest from the financial services and multinational banks has returned and will be sustained over the short to medium term.

Coupled with demand from tech and co-working operators, prime office rents are set to extend the gains this and next year by another 10 to 15 per cent, Ms Li said.

On Thursday, DBS Group Research analyst Mervin Song issued a report saying that news of HSBC vacating the building "is a disappointment" although the rent for the one-year extension is 36 per cent higher than the original rent. The building contributed around 4 per cent of CCT's monthly gross rental income as at end-June 2018.

"Nevertheless, should CCT decide to continue owning the building, it has another two years to find a replacement tenant, which is ample time. Alternatively, given the higher demand for office buildings in Singapore with recent transactions at tight yields, there is potential for CCT to sell the building above book value," he said.

He maintained a "buy" call on the trust at a target price of S$2.12. CCT units finished flat at S$1.74 on the market on Thursday.

[LONDON] Britain has detected another new variant of the coronavirus, Health Secretary Matt Hancock said on...

[SINGAPORE] One imported patient in Singapore has been confirmed to be infected by a potentially more contagious...

[BRUSSELS] European Union member states have started to prepare their procedure to implement a new trade deal with...