In a first, majority of S'pore-listed firms now have a woman director

Kenneth Limkenlim@sph.com.sg@KennethLimBT
For the first time, the majority of Singapore-listed companies have at least one woman director on its board, but the overall participation of women in corporate boards remains short of a looming 20 per cent target, according to latest data from the Diversity Action Committee (DAC).
PHOTO: EPA-EFE

FOR the first time, the majority of Singapore-listed companies have at least one woman director on its board, but the overall participation of women in corporate boards remains short of a looming 20 per cent target, according to latest data from the Diversity Action Committee (DAC).

The proportion of all-male boards slipped to 49 per cent as at end-June 2018, the first time the measurement has crossed below 50 per cent, according to DAC, an advocacy group comprising prominent members of the Singapore business community. All-male boards and boards with at least one woman director were evenly split as at end-December 2017.

Associate Professor Lawrence Loh, director of the Centre for Governance, Institutions and Organisations at the National University of Singapore, welcomed the improvement: "Having female directors on the majority of boards in Singapore is a most significant milestone. It shows the progressive advancement of companies in embracing diversity. Beyond national-level targets and numbers, it will be good if companies see that it is in their very own business interests to have such diversity in their leadership echelons."

Despite the improvement, gender diversity among Singapore-listed companies remains short of the DAC's target of achieving 20 per cent women's participation by 2020. That target steps up to 25 per cent by 2025, and 30 per cent by 2030.

The DAC has focused its efforts on getting larger companies to lead the way, and in that respect it has found some success.

Women took 14.7 per cent of boards seats among the 100 largest companies by market capitalisation, up from 13.1 per cent as at end-2017 and from 12.2 per cent a year earlier to set a pace ahead of the rest of the market.

Just 27 of the 100 largest companies had all-male boards, fewer than the 32 six months ago. 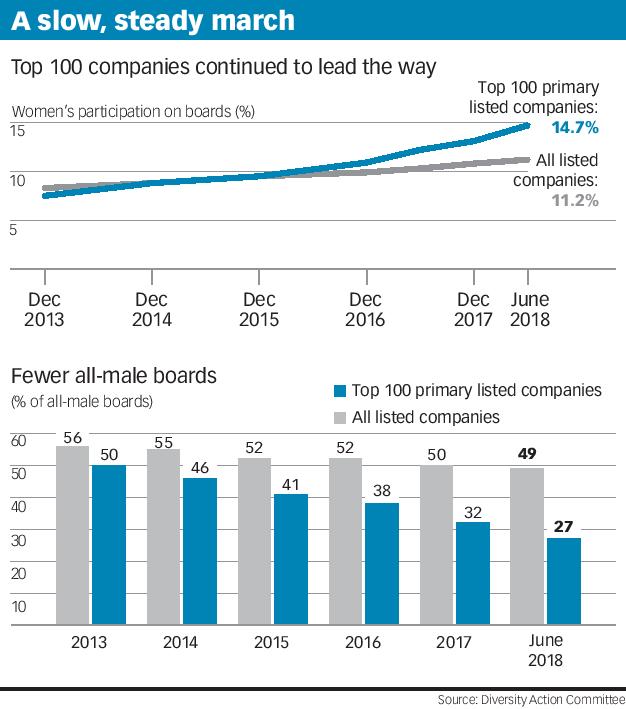 "If the pace is sustained, the Top 100 companies will be the first group of companies to achieve DAC's first-tier target of 20 per cent women on boards by 2020, leading the way for other companies to join in," DAC chairman and Singapore Exchange chief executive Loh Boon Chye said in a statement.

The latest numbers suggest that companies are making an effort to find women to fill board seats and not simply appointing friends and family of insiders. The proportion of women among independent directors in the 100 largest companies has increased to 16.1 per cent as at end-June, from 14.3 per cent in December and 12.6 per cent the year before.

Looking ahead, regulatory changes could support a faster pace of change. Proposed changes to the Code of Corporate Governance will include a requirement that companies set targets on board diversity and report on their progress in meeting those targets.

Veteran corporate lawyer Rachel Eng said that work over the past years to increase awareness of diversity is finally bearing fruit.

"There's a sense of priority and urgency among some companies," she said. "Sometimes when I meet people, they immediately ask me, are you available (to be a director)? And this is at the card exchange time."

For what it is worth, Ms Eng is not currently available. She is stepping down from the boards of listed Olam International and Starhub as she takes on a new role to head PwC's legal arm.

Experienced and capable women still fall under the radar when they are not part of existing male-dominated business networks, said Ms Eng, who suggested that companies can place women directors on their nominating committees to better access the "female contingent".

"I don't think we've reached the inflection point where we can relax, but certainly it's good momentum," she said.

US tech venture investing gets a boost from pandemic

[OAKLAND] Brian Bell, chief executive of Split Software, was in a meeting pitching investors when California...

[SINGAPORE] Swiss renewable energy producer Axpo will open an office in Singapore at the end of this year to expand...

THE Centre for Seniors (CFS) has partnered with mobile app job portal FastJobs to improve job matching for senior...