In search of e-commerce proxies among Singapore stocks

THIS Christmas, there will be more than fairy lights spreading the festive cheer. Online marketplaces gearing up on discount events will keep the tills - or rather e-wallets - ringing for e-commerce businesses.

But in Singapore, there are few listed equities with direct exposure to e-commerce. As Andrew Gillan, Janus Henderson Investors' head of Asia ex-Japan equities, puts it, most local e-commerce players, the likes of Redmart and Lazada, belong in the unlisted private equity space.

"There is no direct way to play the e-commerce theme in the stock market." The impact on the Singapore stock market in fact comes in the form of threats to traditional stores and supermarkets, Mr Gillan said.

Fortunately, just as Santa has his army of elves and reindeer, e-commerce too is supported by its digital and fulfilment partners.

"The logistics network would need to keep up, for warehousing as well as last-mile delivery. It would also boost the usage of online or mobile payment and this would naturally help with the development of fintech."

According to a recent report by Temasek and Google, the current internet shopping sector in Southeast Asia accounts for just 0.8 per cent of total retail, and is expected to grow to 6.4 per cent by 2025. Correspondingly, the Southeast Asian e-commerce market value will grow at a compounded annual growth rate of 32 per cent from US$5.5 billion in 2015 to US$88 billion by 2025.

Within Singapore's listed universe, many analysts still prefer logistics space providers and government-linked businesses that have switched up their game to capture a slice of the e-commerce market. Analysts remain divided on the new tech-driven entrants that have recently joined the Catalist board such as Synagie and Y Ventures. 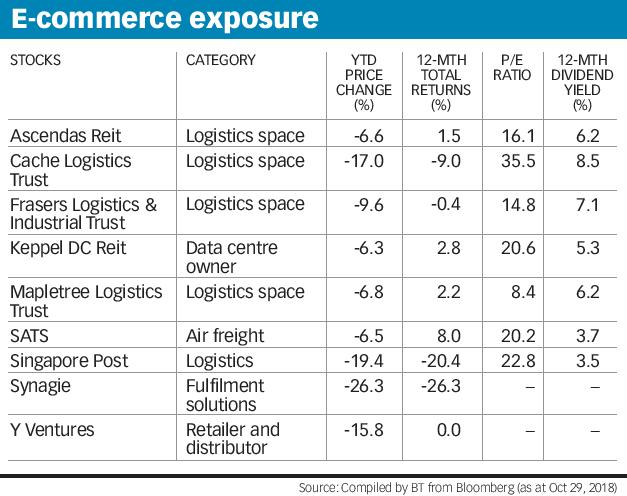 Many of these counters, regardless of their position along the value chain, have tanked and are trading below where they started the year at, after last week's market selldown. The Straits Times Index itself is 14 per cent underwater year to date.

Among warehouse landlords that analysts favour are Ascendas Reit and Mapletree Logistics Trust (MLT). DBS has "buy" ratings on both and target prices of S$2.95 and S$1.50, respectively.

Analyst Alfie Yeo said: "The segment is in a more established and profitable part of the value chain as opposed to start-up e-commerce platforms and retailers that are currently incurring high costs and have little or no profitability."

The brokerage believes MLT has the most leverage to e-commerce growth regionally as it is a pure-play warehouse landlord with exposure in the Asia Pacific. Close to a quarter of its revenue is derived from e-commerce and related tenants.

"As for Ascendas Reit, it is an industrial landlord with multi sectorial exposures in Singapore, Australia and UK, including e-commerce. The Reit's strength is in the business park which is seeing burgeoning demand from firms in the IT, media and research and development industries looking to set up office there."

Other pure-plays that have exposure to e-commerce tenants include Cache Logistics Trust, and Frasers Logistics & Industrial Trust (FLT).

SingPost has been diversifying into increased cross-border e-commerce deliveries, and in 2016 opened its new regional e-commerce logistics hub with a fully automated parcel sorting and warehousing facility. Alibaba also has an approximate 14 per cent stake in the company. In its fiscal year ended March 31, 2018, about 18 per cent of its annual revenue came from its e-commerce business.

SATS has a monopoly when it comes to Singapore's airport ground-handling and airmail handling services of international airfreight goods. It operates in more than 40 other airports and provides air cargo handling services in countries such as India, Taiwan, Hong Kong and Vietnam.

DBS's Mr Yeo said: "Our positive call on SATS is largely based on higher passenger, air traffic and cargo volumes at Changi over the long term. SATS could potentially benefit from handling higher freight volumes at its Changi eCommerce AirHub."

There is less consensus when it comes to smallish pure-play outfits like e-commerce retailers and distributors Synagie and Y Ventures. Mr Yeo said most of them in Singapore are either in the red or at best eking out a small profit.

"While losses are expected to narrow overtime, there is poor visibility on when these companies will sustainably be profitable due to each company's decision to run promotions for higher market share."

Analysts feel the investment community may need more time to understand this sector better before getting in. Kasper Wichmann, UBS Asset Management's head of private equity, Asia-Pacific, said: "Many e-commerce platforms operate in so-called winner-takes-all markets, where the assumption is that once competition settles, they will become profitable.

"In the meantime, these companies may experience significant cash-burn rates as they prioritise topline growth over profitability. In this regard, venture capital and growth capital are more patient than public markets."

However, UOB Kay Hian head of research Andrew Chow finds counters such as Y Ventures, an e-commerce retailer and distributor, and Synagie, which offers business solutions for online and offline sales as well as big data analytics and artificial intelligence services, "interesting".

He says: "Y Ventures will be very exciting in the next few years given its data analytics capability and its strategy of developing new consumer branded goods. It will also be launching AORA by year end, a global concierge platform together with SingPost that could be a game changer if it succeeds.

"Synagie is poised to be Southeast Asia's Baozhun (a leading e-commerce solutions provider in China) in the area of fulfilment, and its venture into insur-tech is super scalable, profitable and positions them well."

There are blue chips that have also ventured into the e-commerce space such as CapitaLand which is bringing the products of its retail clients to the Lazada e-commerce marketplace, and Singtel which offers e-commerce solutions to small businesses. Traditional retailers have also built their own e-commerce platforms like Challenger Technologies and its online marketplace Hachi.tech.

But these are more a response to protect their traditional businesses, so the real impact from e-commerce is less obvious on their performance, Mr Chow adds.

When picking e-commerce proxies, analysts prefer market leaders with clear and viable long-term strategies and good operational execution. They also consider their scalability - whether a company is part of an eco-system where it could potentially be dominant or at least be very significant. Some, like Janus Henderson's Mr Gillan, prefer B2C to B2B models, citing higher valuations for the former and the opportunity to be able to monetise consumer data.

Fed's Powell: More important for US to get digital currency right than be first

[WASHINGTON] In any development of a cross-border digital currency, it is more important for the United States "to...

[NEW YORK] Wall Street's main indexes opened higher on Monday on hopes of a coronavirus vaccine by the year-end,...

STRUGGLING offshore and marine player Ezion Holdings on Monday announced its restructuring plan to refocus its...

MLT on property acquisition spree across China, Malaysia and Vietnam