Marissa Leemarilee@sph.com.sg@MarissaLeeBT
JC&C owns a 50.1 per cent interest in Indonesian conglomerate Astra International, which makes it a loser if the Indonesian rupiah continues its freefall.
PHOTO: BLOOMBERG

BLUE-CHIP heavyweight Jardine Strategic fell by 15 per cent on Thursday as mayhem tore through the Singapore market, testing what seasoned investors thought they knew about stock valuations. The Straits Times Index constituent closed 15.09 per cent, or US$3.20, lower at US$18, its biggest single-day drop.

Other firms in the Jardine stable took a drubbing to a lesser extent and fell to fresh 52-week lows. Jardine Matheson finished 7.09 per cent, or US$3.56, lower at US$46.66.

David Blennerhassett, who publishes on insight platform Smartkarma, told The Business Times: "It's quite apparent that a major investor or investors are exiting or blowing up in size, and that means you're seeing excess (selling) volume in both companies." His guess is that sellers of Jardine Strategic may have got stuck playing the spread between the stock and Jardine Matheson, which had not worked in their favour. Typically, the market expects the two counters to move in tandem with each other owing to their cross-shareholding structure - meaning they have substantial investments in each other and their assets.

Jardine Matheson owns 85 per cent of Jardine Strategic, which holds a 58 per cent stake in Jardine Matheson. "There's circularity there, it's like a snake swallowing its own tail, so the two should be highly correlated," Mr Blennerhassett said.

But with the recent spike in market volatility, the usual relationship between the pair has collapsed to levels unseen. The share price ratio of Jardine Matheson to Jardine Strategic was 2.59 times as at market close. This compares with the long-term average ratio of 1.71 times based on Mr Blennerhassett's calculations, using prices from 2002 up to now.

Anyone who had bet on a mean-reversion by shorting Jardine Matheson and buying Jardine Strategic when the ratio began shooting to unprecedented levels earlier this week would have been squeezed, he noted. The long-short strategy has not worked, he said, because markets have gyrated.

"It's completely distorting things . . . Earlier this week at a ratio of 2.12 times, I thought it (Jardine Strategic) was a buy. Then it widened to 2.29 times. Then 2.37 times yesterday. Today, it touched above 2.6 times. Now, I'm running out of superlatives."

The divergence is unjustified, Mr Blennerhassett said, but there is no telling when normality will return either as indiscriminate selling seems to be the mood of the moment as many funds face a liquidity crunch. 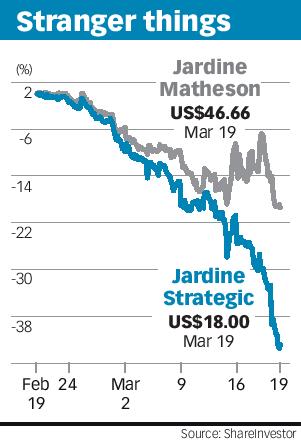 United First Partners head of Asian research Justin Tang noted that market watchers have witnessed a whole lot of unusual events in the past two weeks, such as US Treasury yields rising even as stock prices were plummeting."To understand Jardine Strategic's fall, it's best to look at its constituents. People sell those components, and it feeds through," he said.

JC&C owns a 50.1 per cent interest in Indonesian conglomerate Astra International, which makes it a loser if the Indonesian rupiah continues its freefall.

Mr Blennerhassett attributed the tighter discount of Jardine Matheson's share price to its NAV to the fact that the Keswick family's stake is held in Jardine Matheson, and that it also pays a higher dividend. He noted that Jardine Matheson has been carrying out share buybacks, and it has money to do more if it chooses to do so.

Still, the rising ratio level between the two stocks is baffling, he added.

Banks to stay open except for some branches; remaining outlets will be spread across Singapore