FRASERS Centrepoint Ltd's (FCL's) winning bid earlier this month for the Jiak Kim Street plot has been deemed to be bullish.

The S$1,732.55 per square foot per plot ratio (psf ppr) is some 40 per cent higher than the S$1,239 psf ppr that GuocoLand paid in June last year for a nearby site which it is developing into the Martin Modern condo.

A seasoned property consultant estimates that GuocoLand's breakeven cost for the Martin Modern project is about S$1,900 psf. According to URA Realis data as of Tuesday, GuocoLand has to date sold 211 units in the development at an average price of S$2,254 psf. So far it has released 211 units - less than half the 450 in the project.

The consultant estimates Frasers Centrepoint's breakeven cost for the Jiak Kim project at around S$2,450 psf. Assuming FCL needs a profit margin of, say, 10 per cent, it would be eyeing an average selling price of around S$2,700 psf.

This pricing level reflects a 20 per cent increase from the Martin Modern price. What are the chances that FCL will be able to attract buyers if it were to launch its project on the Jiak Kim Street site in about a year's time at S$2,700 psf?

Here's one way of looking at things. The Jiak Kim plot, which also includes three conserved warehouse buildings that once used to house the Zouk nightspot, is superior location-wise to the Martin Modern site.

For one, the Jiak Kim site fronts the Singapore River whereas Martin Modern will not be a riverfronting development, though some units in the condo will enjoy views of the river.

Moreover, the Jiak Kim Street plot is also seen as being more accessible - as it is just off Kim Seng and Havelock roads in addition to being closer to an MRT station (the future Great World and Havelock stations on the Thomson-East Coast Line) compared with the Martin Modern site. 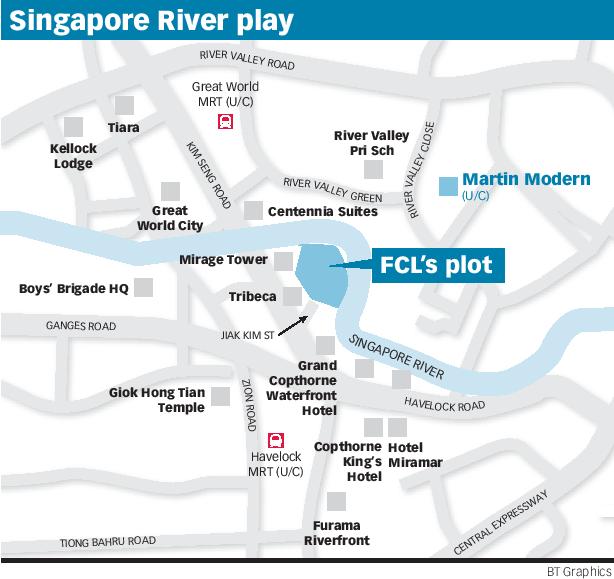 Based on these attributes, one could argue that currently, residential units on the Jiak Kim site could command 5 to 10 per cent more than Martin Modern. For the sake of argument, let's assume the upper end of this range.

It is not unimaginable for, say, a further 10 per cent price appreciation in the next 12 months given the prevailing buoyant sentiment - which would result in an average price of S$2,727 psf for FCL's project.

In short, FCL can achieve a price that will allow it to earn an estimated 10 per cent profit margin on the development.

Moreover, FCL has other options. The group, which is an established owner and operator of serviced apartments, may choose to build serviced apartments on the Jiak Kim site, as allowed under the Urban Redevelopment Authority's tender conditions for this site.

Upfront remission of the 15 per cent additional buyer's stamp duty on the site's purchase price of S$955.41 million - which would amount to a whopping S$143.3 million - would be available if FCL decides to develop serviced apartments, just as it would if it were to build strata apartments for sale.

Assuming one is confident about the long-term prospects for Singapore, developing serviced residences on a riverfronting District 9 site is workable.

From an internal rate of return and cashflow perspective, though, FCL may well opt to develop strata apartments for sale.

The annual net income from operating serviced apartments on the site would only be a small percentage - 5 per cent or less - of the capital value of the completed project. It would take many years before FCL recoups its investment.

On the other hand, if the group were to develop the Jiak Kim site into apartments for sale, it would be able to recover its total development cost and even earn a profit from the project by the time the project is completed in three or four years' time - assuming the current upbeat sentiment in the residential property market continues to prevail over the next few years.

So FCL has the option of a long-term play or short-term play on the Jiak Kim site.

GuocoLand began selling Martin Modern in July this year and to date it has released only 211 units. Its strategy has been one of controlled release of units accompanied by an inching up of prices as each batch of units is released.

Analysts say GuocoLand could further slow down or even halt the release of new units in Martin Modern - until closer to the time when FCL launches its Jiak Kim project - to ride on higher prices.

GuocoLand, controlled by Malaysian tycoon Quek Leng Chan, was the second lowest bidder at the Jiak Kim tender, offering S$835.44 million or S$1,515 psf ppr. It was probably just trying its luck, or to borrow a Malay phrase, was on a tikam-tikam expedition at the tender.

[MUMBAI] PVR Ltd is in talks with Bollywood producers to release their movies in cinema halls now rather than on...

Carrefour suitor has few regrets about a 'good deal' that failed

[PARIS] After a tumultuous week that saw the French government shut down an attempt to take over Carrefour SA,...