Biggest single shareholder Axiata said to be also mulling offer; Keppel says offer a strategic initiative to drive business transformation at M1
Angela Tanangelat@sph.com.sg
Keppel Corp (KepCorp) on Thursday said it will be making a pre-conditional voluntary general offer of S$2.06 cash a share for the M1 shares it does not own, and a separate offer to privatise subsidiary, Keppel Telecommunications and Transportation (Keppel T&T), at S$1.91 a share in cash.
PHOTOS: ST FILE, AFP

KEPPEL Corp (KepCorp) on Thursday said it will be making a pre-conditional voluntary general offer of S$2.06 cash a share for the M1 shares it does not own, and a separate offer to privatise subsidiary, Keppel Telecommunications and Transportation (Keppel T&T), at S$1.91 a share in cash.

The offer for M1, made together with Singapore Press Holdings (SPH), values Singapore's third largest mobile operator at around S$1.91 billion.

It said the offer is a strategic initiative to gain majority control of M1 to drive business transformation initiatives including digitalisation of the company's operating platform, cost management and balance sheet optimisation to help it better compete.

Currently, KepCorp owns 19.3 per cent of M1 through its 79.2 per cent subsidiary Keppel T&T, while SPH has a 13.45 per cent stake. The offer will not be extended to Keppel T&T as it is a related corporation.

Loh Chin Hua, KepCorp's chief executive officer, said the offer for M1 is in line with the group's mission as a solutions provider for sustainable urbanisation.

"Keppel Corporation has increasingly been transforming its traditional B-to-B business to include retail customers in gas, electricity and urban logistics. Incorporating M1's capabilities and two million customers in a combined digital platform would provide opportunities for synergies and cross selling of services."

As the transformation of M1 is a complex undertaking that will take several years, the offer allows M1 shareholders who are not prepared to wait and bear the related risks to realise their investment upfront. Since a high in March 2015, M1's share price has plunged nearly 60 per cent as the telco faces increasing threats in Singapore's congested mobile space.

SPH chief executive officer Ng Yat Chung said the media and property group is supporting Keppel in the offer, as it sees the potential for long-term value creation in M1. The transaction is earnings accretive - that is, adds to earnings per share - for SPH shareholders; and is part of SPH's ongoing strategy to enhance value for its shareholders.

"We also see opportunities for SPH to leverage on M1's mobile platform to offer on demand and ready digital content to better serve our customers," Mr Ng added. 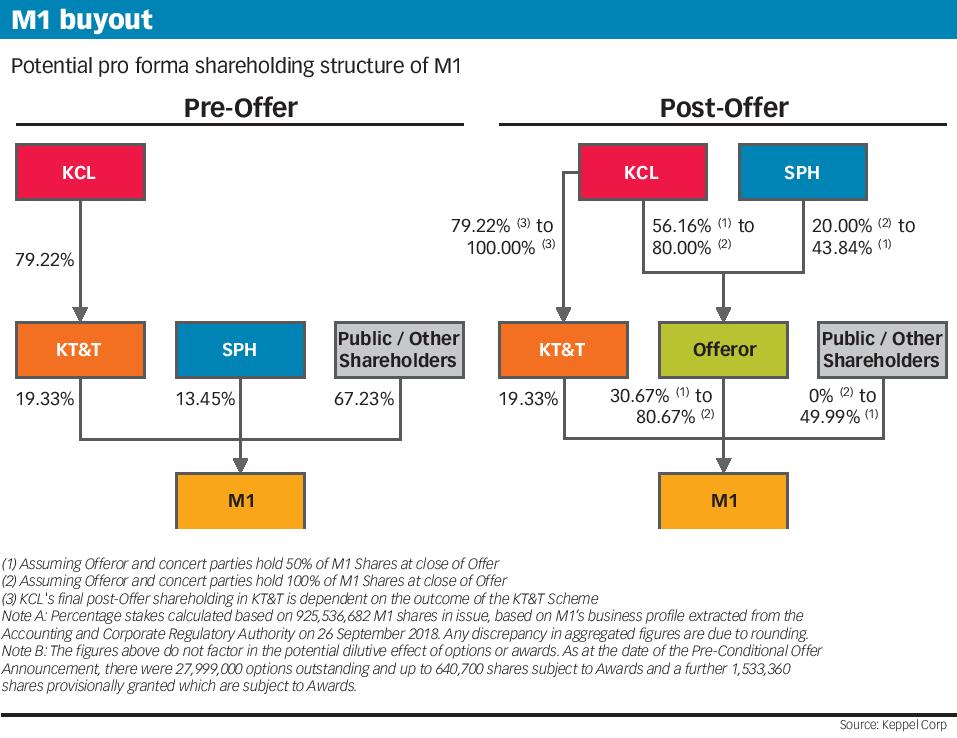 The offer will be made through a joint venture company, Konnectivity Pte Ltd, which is majority owned by Keppel. SPH will inject its 13.45 per cent M1 interest into Konnectivity in exchange for a minimum 20 per cent stake in the latter. SPH also plans to invest up to S$51.3 million cash in Konnectivity to partially fund the offer.

Apart from the Keppel group and SPH's substantial stakes, Malaysia's Axiata Group Bhd is M1's biggest single shareholder with a 28.3 per cent block. According to Reuters, it may reject the offer as it was in talks to team up with private equity firms and other companies as it mulled options to launch its own offer to increase its stake in M1. Axiata said late Thursday that the offer should reflect the accurate future value of M1 (inclusive of an acceptable control premium), consistent with market standards.

"We will continue reviewing all options available to us in relation to our shares in M1, with the sole objective of vigorously protecting and enhancing shareholders' value of both Axiata and M1, the latter via our board representation," Axiata said.

UOBKayHian said the transaction is slightly "positive for SPH". It said in a note: "SPH benefits from their investment in M1 potentially performing better over the longer-term with no cash injection at all (assuming the offeror and its parties only own 50 per cent of M1). Even if their combined holdings surpassed 50 per cent and reached 100 per cent, SPH would only need to top up S$51.3 million at most. Either way, SPH benefits from M1 potentially performing better at low or no cost to them."

KGI Securities said the M1 deal was net positive for KepCorp as it is immediately earnings per share accretive and only marginally increases KepCorp's net gearing, which will remain comfortably below peers'.

Kenny Liew, TMT analyst at Fitch Solutions, said there are synergies between M1 and the offerors.

"M1's access to last-mile infrastructure can be used to provide connectivity for properties/infrastructure under Keppel's management, while Keppel T&T's datacentre services can support M1's weak presence in the enterprise segment, for one.

"In other business areas, for instance, Keppel can better integrate its electricity distribution business with M1's home services, and there are also media distribution opportunities that SPH can provide and better realise through M1,'' Mr Liew reckoned.

Many analysts said the offer for M1 is an excellent opportunity for minority shareholders to exit given the dismal share performance and fierce competition. "The transaction price appears high, at a 17 per cent premium versus its long-term average, particularly when there is a structural change in the industry, i.e a new player entering the market (Australia's TPG Telecom),'' Morgan Stanley said.

Maybank Kim Eng noted other pressures on M1 included higher-than-expected capital expenditure as a result of competition and/or 5G rollout as well as a more rapid decline in wireless voice, SMS and roaming as data adoption gains momentum.

Separately, Keppel will be making a general offer for Keppel T&T at S$1.91 a share in cash, with plans to delist it in a bid to simplify the group's corporate structure, improve its capital allocation and better align Keppel T&T's interests with the rest of the Keppel group. Keppel last tried to privatise Keppel T&T in 2002.

Mr Loh said: "The scheme will similarly allow Keppel T&T's minority shareholders, who may be concerned about the prospects of M1 in the face of heightened competition, to make a clean cash exit from Keppel T&T at a substantial premium."

On Keppel's offer to privatise Keppel T&T, Low Pei Han, investment analyst at OCBC Investment Research, said the move is not much of a surprise given Keppel T&T's share price has declined in recent times while the prospects of the data centre segment as well as some parts of the logistics business remain bright.

"This is probably a "low-hanging fruit" for the group, and brings to mind Keppel Land's privatisation in 2015 after Mr Loh was appointed CEO of Keppel Corp in 2014,'' Ms Low said.

Brent pares losses, US crude up on stimulus hopes

[NEW YORK] Global benchmark Brent crude pared losses on Wednesday and the US crude price rose on hopes that a US...

US: Stocks gain on stimulus talks, shrugging off Trump-Biden brawl

[LONDON] British broadcaster David Attenborough on Wednesday led a campaign by conservation groups for the world to...

Snowden ordered by judge to surrender book profits to US government

[WASHINGTON] A federal judge in Virginia ordered the whistle-blower Edward Snowden to relinquish US$4.2 million in...

[WASHINGTON] US Treasury Secretary Steven Mnuchin said if Oracle's deal for TikTok cannot be closed with terms that...

HDB appoints to its board SAF commander, architect and ambassador