Prudential continues to record the highest reserve ratio of 42 per cent in 2016
Claire Huanghuangjy@sph.com.sg
Miss Teoh of Prudential says: "In Singapore, returns from equities and bonds in the medium to long term are likely to be more modest compared to previous years."

LIFE insurers here have gained from the bullish global markets in 2016, with most of the 10 major players remaining able to at least pay out any non-guaranteed bonuses linked to participating or Par products. And they expect 2017 data, out next year, to be even better as they ride on the buoyant sentiments.

Based on publicly available Singapore data, only two of the 10 - AIA and Prudential - managed to keep their buffers at more than a third of their total Par assets in 2016, down from three a year ago.

A rough gauge of whether an insurer is in a position to pay out any future non-guaranteed bonuses is by looking at the size of their reserve buffers which support these payouts. The reserve ratio is calculated by comparing an insurer's reserve buffer against its total assets. The higher the ratio, the better positioned an insurer is to fund future non-guaranteed benefits, actuarial sources had explained to The Business Times. They added that a high reserve ratio typically reduces the likelihood of a bonus restructuring or bonus rate cut.

From filings with the Monetary Authority of Singapore, Prudential continued to record the highest reserve ratio of 42 per cent in 2016; it had a reserve buffer of S$8.03 billion and total assets in the Par fund of S$19.3 billion.

Lena Teoh, Prudential's chief investment officer, told The Business Times that the synchronised recovery in global growth this year is expected to continue into 2018, led by cyclical upturn in global demand and trade.

"The macro-economic backdrop is supportive of moderate returns from broad asset classes globally, especially from equities where valuations remain attractive on the back of robust earnings growth and dividend yields. In Singapore, returns from equities and bonds in the medium to long term are likely to be more modest compared to previous years. High operating costs and structural headwinds in the labour market remain as hurdles to strong earnings growth," Ms Teoh added. 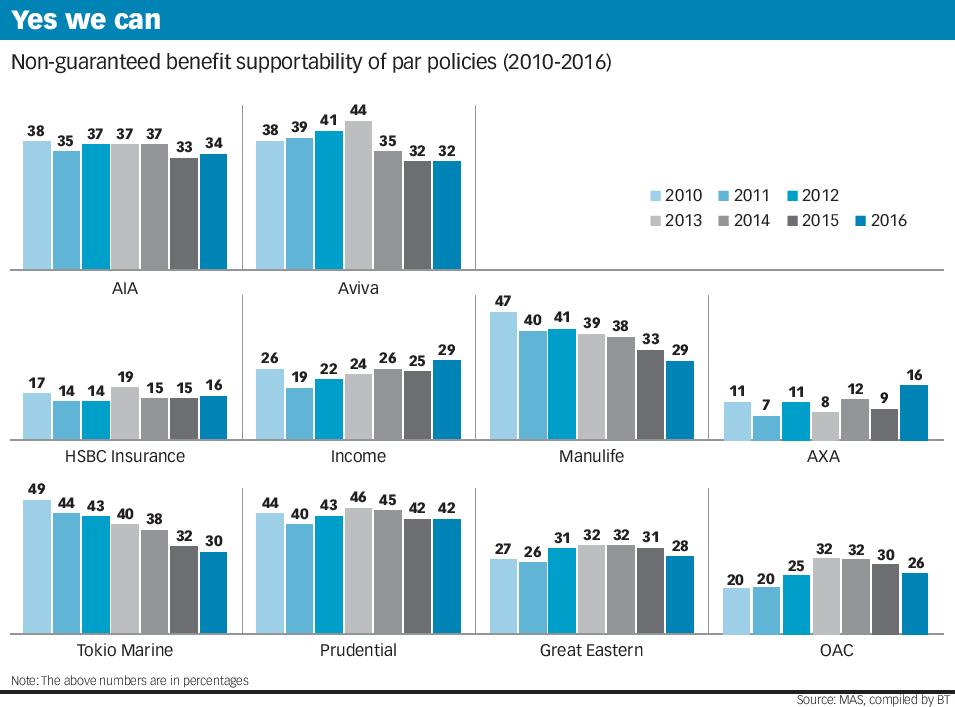 In particular, AXA, which posted the lowest ratios between 2010 and 2015, edged up to 16 per cent in 2016 - an increase of seven percentage points. It attributed this year-on-year rise "as a result of very strong investment performance, which we expect to continue in 2017".

"AXA holds additional buffer in the Par surplus account which places our total reserve ratio in line with the other players', and is a testament to the financial strength and commitment of AXA Singapore and AXA Group to support our business in Singapore," the French insurer said.

It added that the movement in reserve ratio also reflects AXA's philosophy between distributing profits to its clients and holding more reserves.

Meanwhile, the ratios of Tokio Marine Life and Manulife continued to slide between 2010 and 2016, with the former falling from a peak of 49 to 30 per cent, while the latter slid from 47 to 29 per cent.

Some industry players noted that movements of reserve ratios can be attributed to several factors including interest rates, new business volume, investment performance and climate. For instance, a low interest rate environment would require more funds to be set aside by an insurer to cover its guaranteed benefits and this would correspondingly lower the reserve ratio.

The issue of bonus supportability is linked to an insurer's ability to meet the benefits illustrated, apart from whether it is able to pay out future non-guaranteed bonuses.