SHARES of Midas Holdings rose 43.2 per cent, or 4.8 Singapore cents, to close at 15.9 Singapore cents on Wednesday after the maker of aluminium train parts said that an associate company had clinched 2.68 billion yuan (S$547.9 million) of new contracts.

With 459.8 million shares worth S$64.9 million traded, the counter was the most heavily traded by volume on the Singapore Exchange on Wednesday.

CRRC Nanjing Puzhen Rail Transport Co, in which Midas holds a 32.5 per cent stake, secured the contracts to supply metro train cars in China, Midas said in a filing with the Singapore Exchange.

The first contract is worth 1.15 billion yuan, and was awarded by MTR Technology Consultation (Shenzhen) Co for the third phase of the Shenzhen Line 4 project. Delivery is set between February 2019 and September 2020.

The second contract, for the first phase of the Hangzhou Metro Line 6 project, is worth 1.09 billion yuan. The third contract, worth 0.44 billion yuan, is for the Hangzhou-Fuyang Inter-city Metro Project. The second and third contracts were jointly awarded by Hangzou Metro Group Co and Hangzhou Hangfu Rail Transit Co. Both contracts are due between September 2018 and August 2019.

"With China's continued expansion of its domestic rail network to cater to cities with growing urbanisation and rising populations, we are confident that Nanjing Puzhen Rail Transport will continue to leverage its established track record and strengthen its market position in China's rail industry," Midas chief executive Patrick Chew said in a statement.

Nanjing Puzhen Rail Transport has won a number of multimillion-dollar deals over the past year, including 2.37 billion yuan of metro train contracts announced in October 2017. But Midas shares have remained under pressure amid concern about the company's trade receivables and debt even as the contract wins keep coming. At Wednesday's close, the stock was down 26 per cent from a year ago. 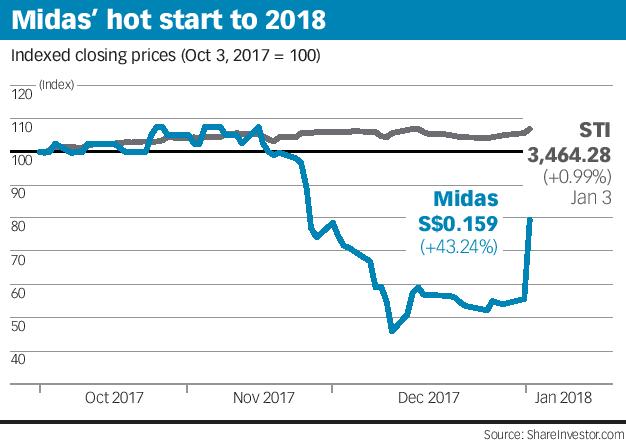 Trade receivables, however, rose 8.7 per cent to 2.4 billion yuan over the same period, drawing a query from the Singapore Exchange. In response to the regulator's questions, Midas said that average trade receivables turnover was 268 days as major customers in China have been slow in payment ever since the railway accidents in 2011.

EHT makes changes to board committees

US pension funds sue Allianz after US$4b in coronavirus losses

[FRANKFURT] Pension funds for truckers, teachers and subway workers have lodged lawsuits in the United States...

Credit Agricole to build its own Saudi Bank after stake sale

[PARIS] Credit Agricole plans to build its own corporate and investment bank in Saudi Arabia after selling the final...

[WASHINGTON] US House of Representatives Speaker Nancy Pelosi is rallying Democrats to prepare for a once-in-a-...