Many of them believed to have met with pair behind Newcastle bid
Anita Gabrielanitag@sph.com.sg@AnitaGabrielBT
Bad publicity surrounding Singapore's Loh cousins since their highly publicised £280 million (S$504 million) bid for Newcastle United has prompted some anxious local and regional investors to step up efforts to pull out millions of dollars invested in entities under the Novena Global Healthcare Group.
PHOTO: BT FILE

BAD publicity surrounding Singapore's Loh cousins since their highly publicised £280 million (S$504 million) bid for Newcastle United has prompted some anxious local and regional investors to step up efforts to pull out millions of dollars invested in entities under the Novena Global Healthcare Group.

The Business Times (BT) understands that these individuals from Singapore, Thailand, Indonesia as well as China are among some 20-30 investors including key executives of a Singapore-based private equity firm, an American multinational technology company and a former investment banker of a big US bank, who had invested in convertible bonds and equity in entities under Novena Global, which is founded by Nelson Loh and Terence Loh.

The total sums involved could reach up to US$20 million, according to several sources.

The worried investors have held several discussions among themselves over the past two weeks on the matter.

"The investors entered into business with them two years ago. But now with all the negative publicity, they are more worried as some have been trying to get their funds back even prior to this. Some investors want their money back, others have written them off while there are those who want to guard their reputation," said one source.

It is understood that the Lohs have met with many of these investors in recent days to assure them that they will "take care of the matter", said the source.

When contacted by BT to confirm or deny the matter, the Lohs did not respond. 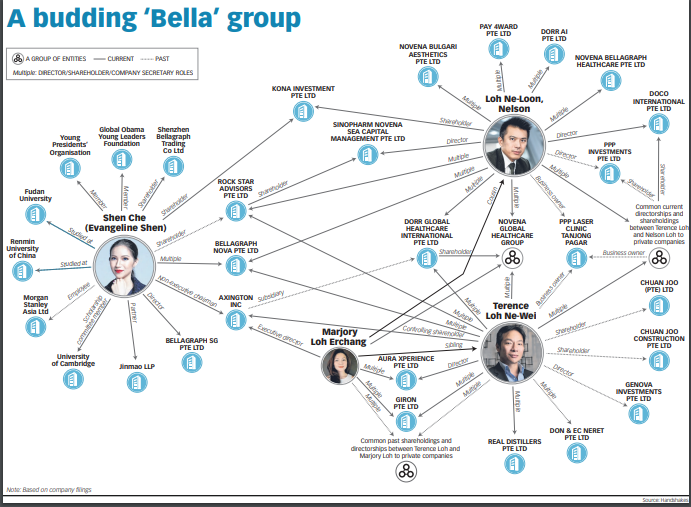 Scrutiny has intensified in recent weeks after news broke that Bellagraph Nova Group (BN) - a merger between the Lohs' private vehicle Dorr Group and their partner Evangeline Shen's Vancouver-based Bellagraph - was bidding for one of England's most high-profile football clubs.

In a press statement issued by BN in June by Nereides Antonio Giamundo de Bourbon, the group's newly-appointed chief marketing and investor relations officer, the firm said it had established its headquarters in Paris and claimed there were 31 entities across 100 countries and 23,000 employees under the group. It also said the combined group had a turnover of US$12 billion, which raised eyebrows in Singapore's corporate space.

In late June, BN announced that it hired Claire Jedrek as global communications and media officer. Ms Jedrek, one of several new hires in the merged entity's communications team, is a racing pro, fitness ambassador and TV presenter. She is married to Singapore race car driver Yuey Tan, whom the Lohs had reportedly backed since 2012.

On Thursday, Ms Jedrek told BT that she left BN in July - merely a month after joining - and that Mr Tan's racing was no longer under the Lohs' sponsorship. While BN announced her appointment, there was no announcement on her leaving. (see clarification note)

It is further understood that several employees have also left the group.

On the back of all that, Catalist-listed Axington Inc's shares have been buffeted. The Lohs took over the company in July and now own a supermajority stake in it. Ms Shen, 32, who is known as Shen Che in company filings, is Axington's non-independent non-executive chairman.

When it resumed trading on August 19 after a trading suspension, the counter surged 4.5 per cent to 18.67 Singapore cents. The next day, it hit a 52-week high of 22.5 Singapore cents, possibly buoyed by news of BN's Newcastle bid.

But following reports of the doctored photographs and other doubts, Axington's stock fell 13 per cent to 19 Singapore cents over the first two trading days of the week.

The Singapore Exchange Regulation (SGX RegCo) has also weighed in on the matter. It said it has "engaged" Novus Corporate Finance, the continuing sponsor of Axington, over how it has assessed the "experience, expertise, character and integrity" of chairman Ms Shen. It said it expects a response from Novus soon.

DBS Bank was the adviser for Dorr on the Axington general offer. When asked for comments on the controversy surrounding the firm, the bank's spokesperson said: "DBS Bank acted as the financial adviser to DORR Global Healthcare International Pte Ltd in the general offer for Axington Inc which was successfully completed on July 13, 2020. DBS Bank has since fully discharged all business obligations in relation to the transaction."

On Wednesday morning, trading in Axington was halted pending an announcement which BT understands may be related to Ms Shen.

And on Tuesday, former US ambassador to Singapore Kirk Wagar who joined Axington's board as independent director on July 21, resigned. He told The Straits Times: "Due to the recent revelations, I have resigned that position and asked for Axington to advise Singapore Exchange and any other relevant parties of that fact."

"I work very hard to show myself as a level headed, transparent friend of Singapore and there is nothing more important to me personally than maintaining that reputation," Mr Wagar added.

The saga is unfolding ahead of Axington's extraordinary general meeting on Thursday where shareholders will vote on a proposed rights issue as well as its second name change just this year alone - it was formerly called Axcelasia - to NETX.

Clarification note: This article has been updated to include Ms Jedrek's comments, which were received after the article was published.

[SINGAPORE] The lone locally transmitted coronavirus case reported on Wednesday (Jan 13) was from a workers'...

[SANTA CLARA] Intel Corp chief executive officer Bob Swan is stepping down Feb 15 and will be replaced by the head...

[ZURICH] Governments across Europe announced tighter and longer coronavirus lockdowns and curbs on Wednesday amid...

Google to pause all political ads from Jan 14

[SINGAPORE] The need for Singapore to focus on environmental and sustainability initiatives, while looking after the...