Nine-year threshold for independent directors back in focus

SINGAPORE-LISTED companies will have to justify the independence of long-serving independent directors - if suggested rule changes put forth by the Corporate Governance Council on Tuesday go into force within the second half of this year.

To encourage firms to refresh and introduce more diversity into their boardrooms, the Council is proposing to enforce a "nine-year rule" that will reassess whether an independent director (ID) still qualifies as independent after nine years in the role.

The Singapore Exchange (SGX) is seeking public feedback on whether the "nine-year rule" should be written into the Listing Rules as a hard limit, or if the ID's term should be put to an annual two-tier vote. With the second option, the ID would have to win a mandate from all shareholders, as well as from the majority of all non-controlling shareholders.

If not, he can only be retained as a non-independent director.

To provide sufficient time for companies, notably the small and medium enterprises (SMEs), to adjust their board composition and search for new IDs, the Council has recommended a transition period of three years to be provided.

Nearly 30 per cent of IDs in Singapore have more than nine years of service under their belts. Some IDs have served for more than 30 years.

The nine-year rule is just one of 12 other "baseline" market practices that the Council wants to add to the SGX Listing Rules for mandatory compliance. Currently, firms are only encouraged to observe these practices under a comply-or-explain regime.

The Council is also recommending moving the current guideline for a third of any board to comprise IDs to the SGX Listing Rules. Already, 96 per cent of listed companies have boards with at least one-third IDs.

Another suggestion tossed open for public consultation is to consider a more stringent definition of director independence. Currently, a director can still count as independent if he owns less than 10 per cent of a company's shares. Under the suggested rule change, he will no longer be considered independent once he crosses the 5 per cent threshold to become a substantial shareholder. 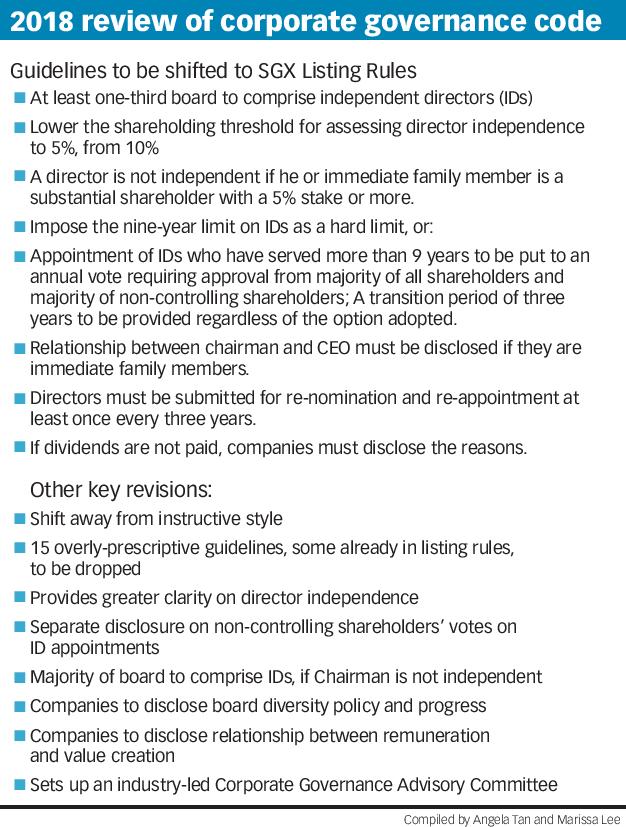 Other new elements were introduced into the Code with the aims of making remuneration more transparent and enhancing board diversity across gender, age, geographical knowledge and skills. But while remuneration practices have been cited as one of the key factors contributing to the global financial crisis, and the US, the UK, and Australia have introduced laws to give shareholders a "say-on-pay" over the last few years, the Council said it would not recommend a say-on-pay regime for now.

Sean Mah, chief investment officer of Astral Asset Management, told The Business Times that he agreed with the Council: "When a company is not doing well, we don't like it when management gives themselves big bonuses similar to when times are good. But for now, leaving it to an independent and qualified board to decide on remuneration would be more suitable than leaving it to minority investors who may not be in tune with market practice."

Other investors hoped that more could be done to safeguard the interests of minority shareholders, since most companies here have concentrated ownership structures.

Stockbroker Jerry Low told BT: "At present, many independent directors are all rubber-stampers.

"One of the most useful proposals in the Reit space (passed last year in the 2017 SFA Amendment Act but not yet gazetted) was to make IDs statutorily responsible to prioritise unit holders' interests over and above those of the manager should there be a conflict of interest. Otherwise, it could be a criminal offence.

"If the same can be extended to the other listed companies, that would be a major step forward. Just having the provision there would probably wake up the IDs a little bit more."

Singapore's Code of Corporate Governance was last revised in 2012. A nine-year hard cap for IDs was proposed then, but excluded from the final version.

Kurt Wee, president of the Association of SMEs, told BT: "My preference is for a two-tier vote. Although it's a process that is a bit more tedious, it gives the company the option of another extension and you have a process that satisfies the minorities."

Many directors here are still not conversant with the Code, so the aim this time round was to simplify and cut out the verbiage. Overall, the Code's word count was reduced by half.

Corporate Governance Council chairman Chew Choon Seng told an audit committee seminar on Tuesday: "The Council came to an early consensus that the Code can be simplified and streamlined so that it sets out principles that are over-arching and non-disputable statements of good corporate governance...

"The imperative is for companies to recognise that good corporate governance helps in accomplishing their business mission and objectives and is therefore in their own best interests."

[KUALA LUMPUR] Malaysia aims to borrow its way out of an economic slump brought on by the coronavirus pandemic, and...

Half of Americans want meat-free options after industry's crisis

[WASHINGTON] The US meat industry crisis that saw thousands of sick workers, surging prices and grocery-store...

[THAME] The travails of a British chain of cheap hotels during the pandemic have pitted thousands of savers and...

[BASEL] The Art Basel show, which was slated for September, has been called off amid worries about health risks and...

[BERLIN] Volkswagen is considering more cost cuts to help cope with the economic impact of the coronavirus pandemic...