Anita Gabrielanitag@sph.com.sg@AnitaGabrielBT
Troubled Noble Group issued its third back-to-back quarterly profit warning for the current financial year, this time flagging massive potential net losses of some US$1.1 billion to US$1.25 billion for the three months to September.
PHOTO: REUTERS

TROUBLED Noble Group issued its third back-to-back quarterly profit warning for the current financial year, this time flagging massive potential net losses of some US$1.1 billion to US$1.25 billion for the three months to September.

The news reignited concerns over the survivability of the group, once Asia's largest commodities trading house, amid harsh operating conditions and rising liquidity pressure.

Even so, the concurrent announcement by the struggling Singapore-listed firm that it was selling its oil-liquids business to Vitol Group at better-than-expected valuations that could net as much as US$582 million based on first-half year accounts may have cushioned the blow somewhat.

While Noble's guidance of losses in the third quarter was "clearly negative", they are largely non-cash in nature - US$1.05 billion to US$1.15 billion will stem from exceptional items - and "do not eclipse the positive from the proposed asset sale", said Barclays in a note.

"Our base case remains that Noble will eventually conduct a liability-management exercise, likely in the form of a debt exchange/extension plan," said Barclays.

Trading in the stock was halted last Friday afternoon pending an announcement of a major transaction. Year to date, the counter has lost nearly 80 per cent.

The group is struggling to turn around its operations while tackling massive debt maturities and the announcement of the proposed sale of its oil liquids business to the world's largest oil trader follows a month after it completed another sale as part of a strategic review of its North American gas and power business to Mercuria. 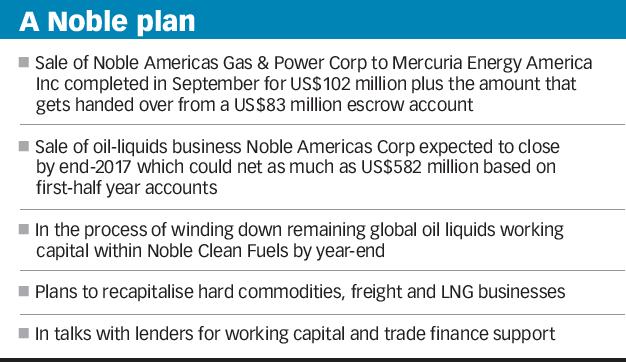 Noble cited an operating environment that continues to be challenging for the third quarter results which will be released on Nov 10. This included constrained liquidity and access to trade finance lines that had led to disruption costs and prevented it from taking advantage of profitable trading opportunities.

Analysts will likely be on the look-out for one telling figure - the extent of the group's cash burn.

"We need to see the actual numbers as what we care about most is the operating cash burn levels which have been in the negative in the last two quarters," said Gloria Tsuen, Moody's vice-president and senior analyst.

JP Morgan has assumed a US$300 million cash burn for the quarter.

The stress is evident with Noble having posted a wider net loss of US$1.9 billion for the first-half period from US$14 million a year ago.

In the announcement on Monday, Noble said it has entered into a stock purchase agreement with Vitol for the proposed sale of Noble Americas Corp (NAC) through which Noble's global oil liquids business is primarily conducted for a gross consideration of US$1.42 billion.

After deducting indebtedness of about US$836 million, the cash proceeds would come up to US$582 million. This, however, is based on first-half year accounts and is subject to change at the final close of the transaction which has a long stop date of Feb 1, 2018.

The group has also been in intense talks with lenders to meet its working capital and trade finance needs.

"Whilst no assurance can be given as to the outcome of these discussions, the Group believes that these are open and constructive, and are moving forward," it said.

Beyond the sale of the global oil liquids business and Noble Americas Gas & Power Corp, Noble also announced in July that it hoped to sell assets to raise some US$800 million to US$1 billion over the next two years. Under a strategic review led by chairman Paul Brough, who was appointed in May to replace company founder Richard Elman, the group has also cut headcount to 400 from 900.

On Monday, Noble also said that it has obtained a two-month extension to Dec 20 this year of a waiver in relation to its committed unsecured revolving credit facility (RCF) due next May.

Although this is positive, Barclays pointed out that the new deadline was "puzzling" given that the NAC sale's long stop date is next February. For that reason, it expects the RCF creditors to provide a further extension until the NAC sale is done.

Noble has been fighting fires since February 2015 when Iceberg Research accused the group of overstating its assets by billions of dollars, a claim the group has consistently rejected. But that has taken a toll on its market value that has plunged by over 90 per cent from then to S$470 million now.

Moody's Ms Tsuen said: "It's doing the best it can. (But) It can only sell what it has."

IN a move to guide companies through a green transition, the Green Finance Industry Taskforce (GFIT), convened by...

THE family-member owners of International Press Softcom (IPS) have made a voluntary conditional offer to delist and...

[HONG KONG] Hong Kong stocks plunged Thursday in line with a global sell-off fuelled by profit-taking from a recent...

[BANGKOK] Thai Beverage is planning to lodge a filing to list its brewery unit on the Singapore stock exchange as...

[LONDON] European stock markets sank at the open on Thursday, extending the previous day's heavy losses as a global...