This is double its current pre-tax profit level of S$500 million as at 2017, the bank announced.

The target will rest largely on OCBC's strategy of capturing investment and capital flows between China and South-east Asia through its Wing Hang acquisition in 2014, with OCBC commanding the largest Southeast Asian presence of the top-four foreign banks in the Greater Bay Area, OCBC's chief executive officer Samuel Tsien told reporters.

The bank will also ramp up investments in the group's franchise in the Greater Bay Area, pumping in S$200 million in the period - not just to raise its staff count there by 40 per cent to at least 4,200 staff, but also to spend on technology to boost capabilities.

In a press briefing held in Hong Kong, Mr Tsien outlined the opportunities ahead for the bank, noting that the Greater Bay Area was already contributing 12 per cent of China's GDP last year.

By 2030, the area is expected to be the world's largest bay area in GDP terms, eclipsing business clusters in the Greater Tokyo bay and in San Francisco, data from KPMG China and Asia-Finance Structured Finance Association showed. The Greater Bay Area's projected GDP in 2030 is US$4.6 billion.

OCBC is now the fourth-largest foreign bank by network size in the Greater Bay Area, which is a hotly sought-after market among banks for the region's access into the rising fortunes of China. Indeed, the Greater Bay Area is where three of the world's top 10 container ports sit. 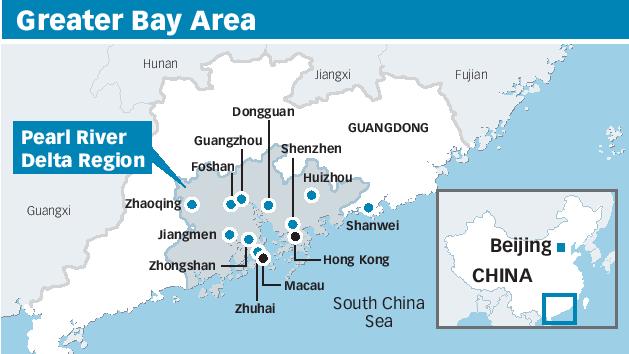 A bridge-tunnel that will connect Hong Kong, Zhuhai and Macau, is due to be opened this year. Nearly 300 billion yuan (S$63 billion) in investments in railway projects in the Greater Bay Area is expected to be pumped in by 2020.

But where OCBC hopes to stand ahead of its competition is in capturing Chinese flows through its presence in parts of South-east Asia.

For example, in Indonesia, OCBC has been investing significantly and has recorded about 20 per cent year-on-year growth through its subsidiary OCBC NISP, said Mr Tsien.

Indonesia, a burgeoning economy in Asean, had a 2017 GDP of about US$1 trillion; OCBC has more than 300 branches there. "South-east Asia is the major beneficiary of that flow. We will be able to present a competitive advantage in that category," he said.

OCBC's big stride to capture greater flows out of China comes amid a bigger diversification strategy, with Greater China having made up just about 5 per cent of the group's profits in 2012, the year Mr Tsien was appointed as chief executive officer of OCBC. Singapore and Malaysia then made up 85 per cent of group earnings, which was deemed too high a concentration, he said.

Despite there being competition, he sees enough to go around for the bank, adding that the significant infrastructure requirements for overseas projects by the Chinese cannot be captured by the Chinese policy banks alone. "The economic development is so huge that it will create enough opportunity. It's not a zero-sum game, the pie is growing."

To be sure, of the 89 branches that OCBC has in the Greater Bay Area, most, or 66 branches, are based in Hong Kong, with five in Shenzhen and three in Guangzhou city.

Meanwhile, there are moves by other banks in Hong Kong and Singapore to refine their branch strategy, with Standard Chartered announcing plans to apply for the virtual banking licence in Hong Kong - a licence that has been opened up to non-banking entities as well.

But Mr Tsien said the bank would not necessarily have to add more branches to boost its presence in the region. Instead, OCBC can review the branch profile to tap the various needs of each city, he said.

Notably, Shenzhen is shaping up into a high-tech Chinese city, while other key Chinese cities would need expertise such as export financing in order to expand overseas in new markets. Separately, OCBC also has an outreach via 14 branches in Shenzhen through its partnership with Bank of Ningbo.

Mr Tsien noted that the two-thirds of the S$200 million to be invested in the Greater Bay Area franchise will be in technology expenditure.

OCBC is in active dialogue with its fintech unit in Singapore, to see how the bank can adapt certain solutions for its Hong Kong operations. The bank is speaking with some applicants of the virtual banking licence as well, said Na Wu Beng, chief executive officer of OCBC Wing Hang Bank.

Even as the ebb and flow of political tensions has left the Asean region refining its views on Chinese investments coming through via China's One Belt, One Road strategy, Mr Tsien is confident that the bank is backing Chinese projects that are beneficial for Asean countries.

"We will finance projects that are good for the nation in the long term. We do not involve ourselves in investments where it only benefits a certain sector."

He is also confident that any stresses to the Chinese economy would be managed via a "long landing", noting that China is able to to absorb pressures from inefficiencies in its system.

While Mr Tsien acknowledged that a pure economic perspective suggests that "short and sharp pain" is more conventional, the sheer size of China's economy has to be considered. "We do not think that it will end up with a hard landing situation."

AS the Covid-19 pandemic put a dent on overall property investment activity in 2020, shophouses in Singapore proved...

[SEOUL] South Korean shares slid on Wednesday, led lower by selling from foreigners, as investors eye the outcome of...

One year after lockdown, Wuhan clubbers hit the dancefloor

[SYDNEY] The Australian and New Zealand dollars were again challenging chart resistance on Wednesday as their US...

CapitaLand's pursuit of heft and diversity is not working; it's time to separate growth from value