Olam consolidating in US after buying spree

This includes cross-selling products to existing customers, as well as gaining new customers among the large number of medium-sized companies
Andrea Sohsandrea@sph.com.sg@AndreaSohBT
Peanut crops are first upturned from the ground so that they are dried by the sun, before another machine is used to pick them.
PHOTO: ANDREA SOH
Each peanut picker like this costs US$125,000 but alleviates the need to have many farmhands. This 9,000-acre farm has only 13 full-time employees, and adds four to five more during harvest season.
PHOTO: ANDREA SOH
Chuck McGlamory, a manager for Doster Peanut Company, a buying point owned by Olam subsidiary McCleskey Mills, says that all growers are treated the same regardless of their acreage because relationships and trust are important in the business.
PHOTO: ANDREA SOH
A worker unloads a truckload of peanuts that has just arrived, and the first step of processing involves removing dirt and foreign material such as sticks and grass.
PHOTO: ANDREA SOH
After shelling, the peanuts are sorted into four categories of quality, based on their size and whether they are whole, before they are further processed.
PHOTO: ANDREA SOH
Peanuts being blanched, which is the process of removing their red skin before they are roasted, salted and then packed into peanut snacks or trail mixes. Four fifths of all peanuts are blanched, and Olam has 80 per cent of the outsourced market.
PHOTO: ANDREA SOH
Olam processes onions at the Firebaugh plant in California, acquired as part of the Gilroy deal in 2010.
PHOTO: ANDREA SOH
At the Firebaugh plant, Olam also processes garlic into powder and flakes, with roasted options offered as well.
PHOTO: ANDREA SOH
The plant also processes parsley, which is mixed with other food ingredients into condiments and other food products.
PHOTO: ANDREA SOH

IN Wilcox County, four hours by road from the airport in the southern state of Georgia in the United States, there is no other job available if one wasn't a peanut farmer, a teacher, or working for Olam International's peanut buying point or warehouses.

"He would have to leave the county," said Chuck McGlamory, a buying point manager for Doster Peanut Company, which is owned by Olam's subsidiary McCleskey Mills Inc, only half in jest.

Such are the inroads that Singapore-headquartered Olam - better known for its extensive operations in Africa - has made into the peanut heartlands in the south-east region of the US, that it is now the largest private-sector employer in the county, with 75 full-time employees, and more during harvest season.

In the US, it hires 3,320 people, including some 1,700 seasonal employees, spread across marketing offices, manufacturing facilities and crop buying points. This compares with a barely-existent presence in the country just a decade ago.

"What people don't realise is that US is today our largest regional operation. As a single country, it is the largest in the Olam franchise," said group chief operating officer A Shekhar during a media tour of Olam's operations in the US.

While Olam has its US headquarters in Fresno, the centre of the agriculture industry in California which grows nearly half of America's fruits, nuts and vegetables, it also has marketing offices in New York and Chicago, 12 manufacturing facilities scattered across the country, and almond, walnut and pistachio ranches.

The company started in the US in 2002, placing its first employee in North Carolina to source cotton as the country became a cost-competitive exporter of the commodity. Soon after, it established a sales and marketing team on the east coast to sell cashew and coffee.

Olam's ambitions grew in line with its listing on the Singapore Exchange in 2005, and in 2007, it made two large acquisitions that paved the way for its entry into peanuts and cotton in the US. It shelled out US$77 million for the world's largest independent peanut blancher, Universal Blanchers, based in Georgia, and A$166.45 million (S$177 million at current rate) for Australia's Queensland Cotton which also had operations in Texas and California. Another major acquisition followed in 2010, with a deal to buy the dehydrated vegetable processing business of Gilroy Foods and Flavours - one of the largest processors of onions, garlic and capsicums in North America - for US$250 million.

The purchase formed the basis for the group's Spices and Vegetable Ingredients segment in the US, now a core business for the group.

The US has also been Olam's favoured investment destination in recent years, after an attack by short-selling firm Muddy Waters in 2012 led to a re-think in the group's acquisition strategy, causing it to pivot from a "string of pearls" approach involving bite-sized investments to a focus on buying fewer but larger assets. 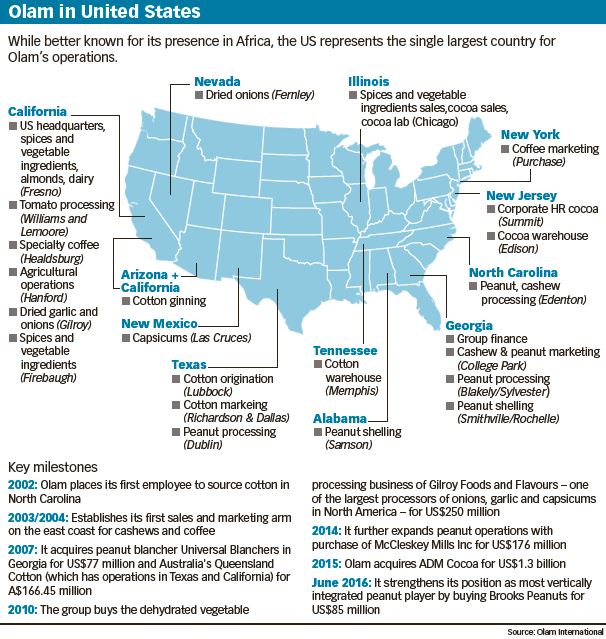 Of the four acquisitions made since the shift, three were in the US. Olam bought McCleskey Mills Inc for US$176 million including debt in December 2014 and Brooks Peanuts for US$85 million including debt in June this year, propelling the group to become the most vertically integrated peanut player in the US. At end-2014, it also announced a deal to buy US agri giant Archer Daniels Midland's cocoa business for US$1.3 billion.

Edible nuts, which include almonds, walnuts and pistachios, make up the other core business in the US for Olam. The firm retains its cotton operations in the US and also has a small dairy business.

Because of Olam's relative youth, said Mr Shekhar, "a lot of people in the US also don't understand the size and scale we have as an employer in California or the south-east (states in the US) today, or as a supplier or a farmer". "We are very well-integrated, and have a very large and growing business."

The company's growth across the value chain in the US has mirrored that of its expansion into both upstream and downstream assets as a group. Still, it is selective about buying plantations, given the higher risks in farming.

"It makes sense for Olam to get into farming in a crop or in a geography only if there is a value pool that we can participate in and win at," said Mr Shekhar. "The fixed asset intensity is high, the gestation is longer, the risks on price (volatility) is much more enlarged. Because of that, we also demand extra value if we get into farming."

In the US, Olam has moved into large-scale farming only for almonds; it grows walnuts and pistachios on a more limited scale and also provides farming services such as seed development for onion and garlic growers.

There is value in almond farming, explained Mr Shekhar, as four-fifths of the world's almonds are grown in California, which allows growers there to control the market and in turn earn higher margins. "The farming viability of almonds is probably the best among all the (26) crops we know, in terms of dollars by hectares and investment on return."

Besides the favourable structure of the industry, almond's soaring popularity among consumers has also led to higher prices, he added. Its health benefits, coupled with the continual stream of new applications in food - from almond milk to chocolate and ice cream to salad toppings - has translated into double-digit growth in demand over the past 10 years.

"These applications didn't exist 30 year ago - you ate nuts as a snack. Because of that, while you have huge supply growth, you have price growth also."

The 9,000 acres in the US plus another 30,000-plus acres in Australia makes Olam the largest almond farmer in the world, and there are plans to expand this acreage further in the US.

Still, the company will put no more than 30 per cent of its total assets in the upstream sector, Mr Shekhar said. It will also diversify the geography and crops to minimise weather and pest risks.

After the quick expansion in the US through the bout of acquisitions, there will be no more "big bold moves"; Olam will now turn to consolidating its activities there.

"Our first focus is on extracting value from what we've already invested in, and there is enough growth coming out of that for the next few years," he said. This includes cross-selling its products to existing customers, as well as gaining new customers among the large number of medium-sized companies.

The success in stitching together various assets aside, what the group is truly proud of in the US, Mr Shekhar added, is how connected it is with the local communities.

"People don't really see us as an outside investor who just comes in and brings a cheque book along. It's about how we're deeply integrated," he said. "And even when we acquire teams, those teams are linked up with the rest of Olam but stay within the local communities we operate in."

It is a sentiment echoed by Mr McGlamory in Wilcox County. In this business, "relationships and trust are the most important", he said. "Whether you're a 50-acre grower or a 100-acre grower, you're equally important to us."

[SYDNEY] Australia set up a national inquiry on Thursday into its five-month bushfire crisis that affected three in...