Proportion of IDs on boards of listed firms on the rise: study

Some companies appear confused over the role of the lead ID; they appoint one even when they already have a non-exec independent chairman
Cai Haoxianghaoxiang@sph.com.sg@HaoxiangCaiBT
More independent directors (IDs) are showing up on the boards of Singapore-listed companies, a comprehensive study released on Tuesday has found.
PHOTO: SPH

MORE independent directors (IDs) are showing up on the boards of Singapore-listed companies, a comprehensive study released on Tuesday has found.

Some observers said the data uptick suggests that business owners are warming up to the benefits of having checks and balances, but others point out that controlling shareholders tend to appoint friends they can trust as IDs.

Meanwhile, a handful of companies with independent chairmen still appoint a separate lead ID, indicating some confusion over the lead ID role.

Independence in this context refers to having no material business or immediate family links to 10 per cent shareholders and above.

Adrian Chan, a senior partner at law firm Lee & Lee who led the study, said the finding that IDs are making up a bigger proportion of boards at listed firms here, is encouraging.

"Shareholders should be comforted that there are more hands on deck, especially since IDs are seen to be watchdogs over shareholder interests," he said.

He added, however, that there is significant room for improvement where the precise disclosure of the pay of both director and the chief executive is concerned. 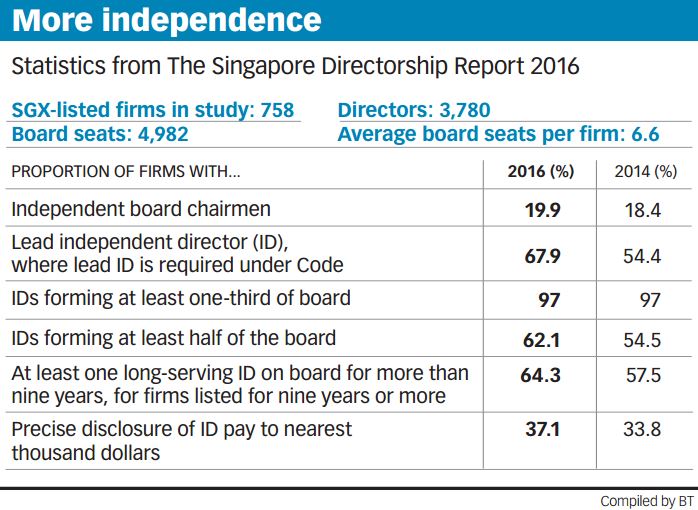 The Singapore Directorship Report 2016, the second edition of the study, analyses directors on the boards of firms listed on the Singapore Exchange (SGX) across board structure, tenure, remuneration, meeting attendance and gender diversity.

Talking points from this year's edition include the puzzling increase in the number of firms appointing lead IDs - even when they did not need to do so.

In corporate governance, the chairman is the leader of the board of directors. The board represents shareholders, sets the strategic direction of the company and appoints key management personnel.

In theory, the board should be separate from the management, but in practice, chief executive officers (CEOs) are often also chairmen due to a desire for control.

Under Guideline 3.3 of Singapore's Code of Corporate Governance, companies should appoint a lead ID when an executive, non-independent chairman is running the show.

John Lim, the immediate past chairman of the Singapore Institute of Directors (SID), said that in such cases, the lead ID was "not a plus":

Another issue people are confused about is director tenure, he said. The independence of IDs who have served for longer than nine years should be "subject to particularly rigorous review", says the Code.

This is an issue that should be separated from that of board renewal, where this "nine-year rule" does not necessarily apply, he said.

Moreover, the statistics can be skewed by market conditions. When there are few new listings, the proportion of companies with IDs who have served longer than nine years will go up, he said.

The directorship report was jointly produced by SID and the Institute of Singapore Chartered Accountants.

At its launch, a member of the audience pointed out that while there seems to be a push towards independent directors, CEOs will still pick directors they are close to socially.

Responding, Mr Chan of Lee & Lee said: "At least institutions can look at business relationships and how entwined IDs are with management and the controlling shareholder. I don't think you can have a complete wall."

China tests its soft power with neighbours over coronavirus outbreak

[VIENTIANE] China called for solidarity on Thursday in a special meeting called to discuss the coronavirus outbreak...

[LONDON] Lloyds Banking Group gave a bullish outlook as the effects of a long-running insurance scandal and the...

Coronavirus: S'pore confirms first patient with both Covid-19 and dengue

[SINGAPORE] Singapore has confirmed the first patient to be infected with both the coronavirus disease and dengue....

US: Wall Street eases at open as virus fears build

[NEW YORK] US stocks opened slightly lower on Thursday as a spike in the number of coronavirus cases outside China...