While the sector is expected to put out another stable quarter, caution lingers for industrial and office Reits amid slowdown
Lee Meixianleemx@sph.com.sg@LeeMeixianBT
It is likely to be another stable reporting season for Singapore's real estate investment trusts with tourist arrivals in July and August giving a boost to retail and hospitality Reits while industrial Reits continue to be pressured by the bleak state of manufacturing activity.
PHOTO: AFP

IT is likely to be another stable reporting season for Singapore's real estate investment trusts (Reits) with tourist arrivals in July and August giving a boost to retail and hospitality Reits while industrial Reits continue to be pressured by the bleak state of manufacturing activity.

Given the cloudy outlook owing to macroeconomic uncertainty and recession fears, analysts have chosen a defensive posture for investing in Reits, favouring steady income and longer weighted average lease expiries. Sectors in vogue include logistics, data centres and suburban retail, while there is some nervousness over investing in landlords in economically-sensitive sectors such as offices.

DBS equity research analyst Derek Tan said: "We think the narrative from management will still largely remain cautious, given that since a quarter ago, we have been seeing a more moderate economic outlook.

"The caution will probably be more pronounced in the general industrial space and office space, given the emerging questions being asked about WeWork's financial plight and co-working demand as a whole.

"For industrial Reits, the feedback from last quarter was that tenants were not looking to expand in a significant way, and they were only willing to talk about lease renewal close(r) to the expiry date, hesitating to expand because of trade uncertainty. We think this will continue."

As for retail and hospitality, based on figures from the Singapore Tourism Board, hotel revenue per available room rose 4.9 per cent in August to almost S$200 per room from a year ago. This followed a 2.3 per cent year-on-year increase in July and marks a reversal from negative or neutral movements of -2.1 per cent, 0 per cent, and -0.2 per cent in April, May and June, respectively.

Mr Tan said the strong hotel performance was mainly contributed by redirection of tourists into Singapore amid the Hong Kong unrest.

Meanwhile, OCBC head of investment research Carmen Lee agreed that there are question marks over the sustainability of the co-working sector at this juncture, but the concept of co-working operators offering flexible spaces and leases still complements office landlords and remains beneficial to the new economy.

"Co-working operators have been a key driver of demand for office space over the past few years, but we did highlight previously that there could be some fatigue from this segment after their aggressive expansion activities. The key issue is that uncertainties exist over the impact on the underlying utilisation rates of the co-working spaces should an economic downturn hit.

"From our understanding, co-working operators form about 7 per cent of CapitaLand Commercial Trust's (CCT) overall portfolio, while their exposure in other S-Reits such as Suntec Reit and Frasers Commercial Trust are lower.

"We believe this is manageable, and exposure can be reduced if Reits continue to make acquisitions of properties with traditional tenants."

CCT was supposed to lease out 21 Collyer Quay, currently occupied by HSBC, to WeWork. If the deal still goes through, the tower would become WeWork's biggest property in Singapore; the lease with WeWork will start in the second quarter of 2021 for a period of seven years.

Vijay Natarajan, analyst at RHB Securities Singapore, said: "Even for CCT, the WeWork lease is expected to commence only in Q2 2021, and we believe the Reit will be able to rent out the space to other tenants if WeWork decides to pull out." 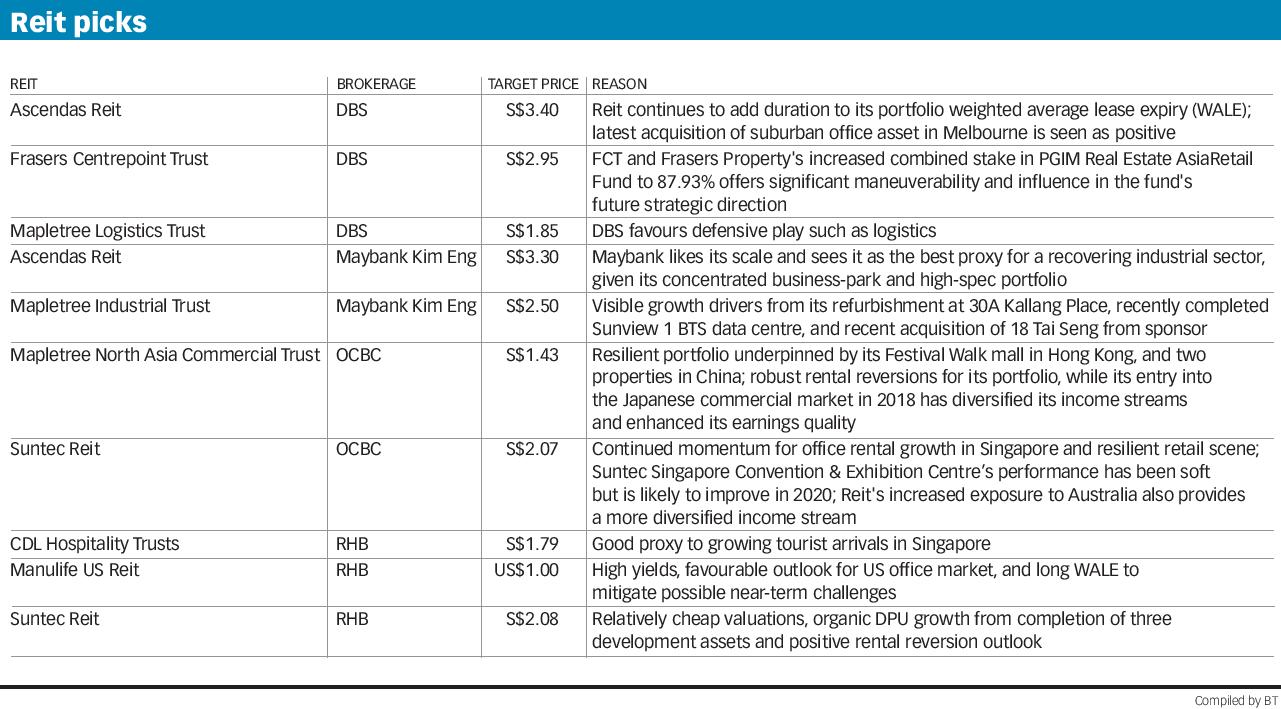 Against a benign interest rate environment, he said that Reits will remain "in flavour" as long as the low-rate environment persists and the global economy does not enter a significant slowdown or recession.

Ms Lee agreed and added that the US Federal Reserve's rate cuts and compression in sovereign bond yields have helped lower borrowing costs and boosted the share prices of S-Reits, allowing them to make acquisitions that are accretive to their distribution per unit (DPU) and net asset values, despite their use of equity financing.

"However, there could be a slight negative impact to DPU initially, due to the timing lag between the issuance of new units and contribution from the acquisitions," she pointed out.

The FTSE ST Reit index has risen 20 per cent year-to-date.

Examples of Reits which have made significant acquisitions recently include Keppel DC Reit, Mapletree Industrial Trust and Mapletree Commercial Trust.

On the rental front, Mr Tan expected positive rental reversions for most sub-sectors, especially office, because leases here tend to follow a three-year rental cycle, and the expiring rents in 2020 are low as they were signed three years ago in periods of oversupply.

That said, the growth in spot rents is expected to slow, amid ongoing macroeconomic uncertainty. Rental reversions for the industrial sub-sector could also remain tepid.

A little further down the road, Maybank Kim Eng investment analyst Chua Su Tye believed that it will be a "big kicker" for Reits in the fourth quarter, should the Monetary Authority of Singapore decide to raise leverage limits for S-Reits.

He believed this would help to support valuations and boost Reits' appetite for acquisitions, which will benefit distributions to unitholders.

It would also enable Reits to better compete against private capital and other global Reits for acquisitions.

The growth will be skewed towards industrial Reits pushing overseas, he believed. While yield compression has led office, retail and hospitality Reits to recycle capital by selling assets, industrial S-Reits have gone the opposite way and pushed faster overseas for growth, amid a supply glut and soft demand recovery back home.

"We see a positive carry for assets in Europe and the US, and hence opportunities for further DPU-accretive deals," he said.

China seeks to scrap ratings requirement for some bond issuers

[SHANGHAI] China's securities regulator has proposed removing a requirement for bond issuers on the nation's stock...