Final headcount reduction not specified, but CEO says numbers will go down progressively
RAE WEEraewee@sph.com.sg@RaeWeeBT
Sats will continue to reduce its headcount after swinging into loss in its fiscal first quarter, it said in a conference call on Monday.
PHOTO: BT FILE

SATS will continue to reduce its headcount after swinging into loss in its fiscal first quarter, it said in a conference call on Monday.

It did not specify the final headcount reduction; as it is, the ground handler and food solutions provider has seen its staff count fall from 16,700 to 13,500 year on year for its first quarter ended June 30, 2020.

"That number will continue to drop because there are cost saving initiatives which are still ongoing in the second quarter, so you'll see that number coming down progressively," said Sats president and chief executive Alex Hungate.

For the first quarter, Sats swung into a net loss of S$43.7 million, compared to a net profit of S$54.7 million a year ago

This was due to the "sharp decline in aviation volume and the loss contributed by the overseas entities", it said. Of the S$43.7 million in losses, S$31.4 million was contributed by the share of results of its associates and joint ventures in places like Greater China and India.

Based on results announced on Monday, the group's reduction in staff cost of S$136.9 million contributed the most significantly to the fall in overall group expenditure for the quarter. It decreased 39.9 per cent from a year ago to S$245.4 million.

"The fall in staff cost was due to a combination of factors such as government grants, lower contract services and reduction in workforce required to manage the lower volumes. Licence fees were also lower in line with smaller aviation revenue," said the group.

Nonetheless, this was outweighed by the fall in Sats's overall revenue, which declined 55 per cent year on year to S$209.4 million, leading to an operating loss of S$36 million. 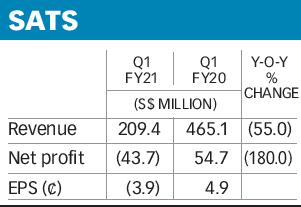 The loss in overall revenue was propelled by the 72.9 per cent fall in revenue of the group's aviation sector to S$110.6 million. On the other hand, its non-aviation revenue grew 73.3 per cent to S$96.9 million.

Given the long road to recovery for the aviation industry, Mr Hungate said that the group is now focused on "reshaping the organisation to a lower cost base" and "(pivoting) to new sources of revenue to new customer segments for food".

"The Sats China business has been growing its customer base quite aggressively… (and) here in South-east Asia, the acquisition of Country Foods has allowed us to grow into the food services industry and retail business faster," he added.

While the group declined to "give guidance" on how much further its staff headcount will be reduced, it said that decisions will likely be made similar to the previous quarter, which was done in a progressive manner.

In response to the latest announcement of the extended Jobs Support Scheme (JSS) by the Singapore government, Mr Hungate said given that the JSS begins in September, it would only be a "third quarter onward impact", and "won't impact (the group's) second quarter".

With this, he added that "in line with the employment expense, (headcount) will start to drift down a little bit further", which also applies to the other markets where Sats has a presence in.

"In some other markets because of the employment law situation where we're unable to move quite as fast to reduce costs… we are addressing that and we hope that that number will start to come back in line over the next quarter or so."