Pay cuts for all except those earning less than S$1,800 a month; CEO Wong Weng Sun volunteers 50% reduction
Marissa Leemarilee@sph.com.sg@MarissaLeeBT
All of Sembcorp Marine's segments posted losses in the six-month period, with the exception of the repairs and upgrades business which reported higher profits.
PHOTO: REUTERS

AFTER a washout first half, Sembcorp Marine's (Sembmarine's) ability to ramp up production remains beyond its control and will depend on how soon the authorities allow foreign workers housed in dormitories to return to the yards in full strength, it said on Wednesday.

Since April, all of Sembmarine's Singapore yards were forced to stop work as a result of the Covid-19 pandemic. This resulted in significant project delays even as the group continued to incur fixed overheads. Revenue in the first half was S$906 million, down 41 per cent from the same period a year earlier.

All segments posted losses in the six-month period, with the exception of the repairs and upgrades business which reported higher profits on better product mix of higher margin upgrade projects which were executed during the first quarter of 2020.

President and chief executive Wong Weng Sun told an earnings call on Wednesday: "We had positioned ourselves for recovery in 2020, but we were unexpectedly hit by Covid-19 and the collapse of oil prices. Given the delays in executing our existing projects, and with new orders likely to remain depressed in 2020, the group now foresees that recovery will be pushed out to 2021 and beyond." 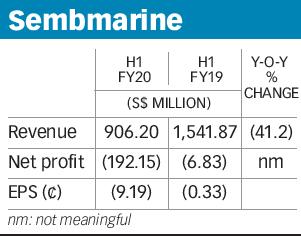 "While we have yet to announce significant new orders this year, we have resumed discussions on several project opportunities," Mr Wong said.

With the relaxation of Covid-19 measures in Singapore in June, yard operations have gradually resumed since July 6. But Sembmarine continues to right-size its workforce.

Mr Wong has volunteered to take a 50 per cent pay cut. Senior management will take a 15 per cent salary reduction; middle management will have their pay slashed by 10 per cent. All other employees in Singapore and overseas will take a 5 per cent pay cut, except for those earning less than S$1,800 a month. Sembmarine's board is also continuing with a 10 per cent reduction in director's fees this year, similar to FY2019.

All non-essential capital expenditures have also been deferred. Capex in the first half of 2020 was S$58 million, which is less than a third of the amount incurred in the first half of 2019. Capex is projected to remain low, as only maintenance capex will be incurred to ensure the safety and operability of the yard facilities, Mr Wong said.

The severe industry downturn, worsened by the Covid-19 stop-work situation, has also resulted in a liquidity crunch for Sembmarine.

Before the partial lockdown, Sembmarine's operating yard workforce was about 20,000 people, including sub-contractors. That number is fewer than 1,000 now, of which 850 personnel are involved in essential maintenance for upkeep of the yard, meaning that they do not contribute directly to revenue.

Sembmarine could not give any visibility on when it expects to return to full efficiency, but noted that it managed to book some revenue in the second quarter as engineers worked remotely on some projects in the engineering phase.

With virtually no operating activities for almost three months in the first half of 2020, cashflow from operations was a negative S$122 million compared with a positive S$273 million in the same period a year earlier.

Sembmarine remained in a net current liabilities position of S$259 million as at June 30, due mainly to term loans maturing over the next 12 months. The group said it is engaging with its lenders to refinance these loans with longer term maturities.

Mr Wong said: "In June 2020, we completed the refinancing of three term loans due that month, with longer term maturities. The group expects to have adequate existing loan facilities to repay or refinance current borrowings as they fall due."

On June 8, Sembmarine announced a proposed S$2.1 billion renounceable underwritten rights issue, followed by a proposed demerger of Sembmarine from its parent, Sembcorp Industries (SCI), via a distribution in specie of Sembmarine shares owned by SCI to SCI's shareholders.

"This will lower our net gearing as at end-2019 from 1.82 times to 0.45 time on a pro forma basis, and significantly reduce our interest expense. We will also raise approximately S$0.6 billion additional cash to fund our working capital needs."

Sembmarine needs to raise the money to execute its diversification plan and expand deeper into established segments such as the gas value chain, Mr Wong said: "We want to be ready for new opportunities, particularly in the clean energy segments where we hope to enlarge our footprint in offshore wind solutions and other green solutions.

"While the road ahead will be very challenging, Sembmarine has demonstrated an ability to adapt and reinvent ourselves over the years. We delivered healthy profits consistently before the oil price crash in 2015. I believe we have both the resolve and ability to achieve the same when our industry recovers and new opportunities emerge from the continuing global transition towards clean energy and other green solutions."

Sembmarine shares rose one Singapore cent or 2.25 per cent to S$0.455 on Wednesday before results were announced after market close.

IReit to take full ownership of Spanish portfolio from Tikehau Capital, DPS at 2.85 cents for H1

With reliefs yet to unwind, Singapore banks sit uneasy about final impact of Covid-19