Its proposed tweaks to securities trading and market practices are aimed at raising efficiency and lowering compliance costs, says Regco chief
Angela Tanangelat@sph.com.sg
Cai Haoxianghaoxiang@sph.com.sg@HaoxiangCaiBT
In a bid to boost the beleaguered stockbroking industry, the Singapore Exchange (SGX) wants to loosen some rules around customer account opening, working outside the office, and on minimum security deposits.
PHOTO: ST FILE

IN A bid to boost the beleaguered stockbroking industry, the Singapore Exchange (SGX) wants to loosen some rules around customer account opening, working outside the office, and on minimum security deposits.

The changes announced on Tuesday are among a raft of proposed tweaks to securities trading and market practices, which some industry players described as long overdue.

Tan Boon Gin, chief executive of the recently set up SGX Regulation (Regco), said that the aim is to move away from a prescriptive approach towards a more principles-based one.

"The primary purpose is to increase efficiency and help to decrease compliance costs. It will give brokers a lot more flexibility," he said.

One improvement cited by brokers interviewed by The Business Times is around the opening of customer accounts.

Instead of setting out a list of the particulars that a broking house must obtain before opening accounts, SGX plans to leave it to brokers to do their own due diligence, including the necessary know-your-customer checks.

Esmond Choo, senior executive director at UOB Kay Hian, said this levels the playing field between local brokers and international players such as Interactive Brokers, where one can easily set up an account online. "There are many ways to establish if a client is bona fide," he said.

Jeffrey Goh, executive director of Phillip Securities, said that less-prescriptive requirements involving the opening of accounts will allow for more innovation to improve and speed up the process. 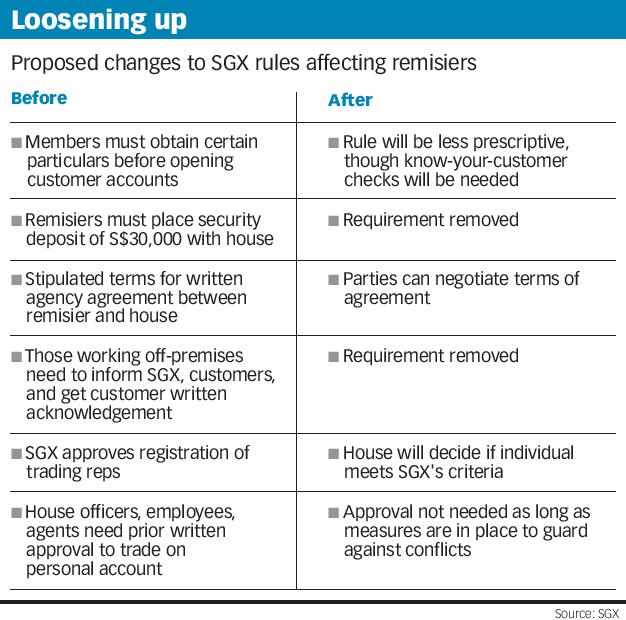 Another welcome change does away with a troublesome requirement: currently, trading representatives (TRs) who want to conduct their business out of their office have to inform SGX and its customers, and obtain the written acknowledgement of their customers.

Society of Remisiers (Singapore) president Jimmy Ho said that most clients "cannot be bothered to sign back" their acknowledgement, which is why very few remisiers choose to work off-site.

But with laptops and iPads easily connected online, more remisiers want the flexibility to work anywhere they want.

SGX said that as "off-premises broking" becomes more commonplace, special attention no longer needs to be called to the practice. However, any limitations associated with the service should be communicated to customers under a general risk disclosure.

Mr Ho said the service provided by remisiers working away from the office is of the same level, though there might be a longer delay in sorting out issues such as error trades.

UOB's Mr Choo said people working alone outside could potentially be out of touch, without a group of remisiers and dealers to exchange ideas with. "But then again, you can be very productive," he said.

A more controversial rule change involves the removal of the need for remisiers to place a minimum security deposit of S$30,000 with their broking house.

The proposed rule gives brokers the flexibility to determine the suitable amount, taking into account the credit assessment of the remisier and the trading limit assigned to him.

SGX said the move might encourage younger remisiers to enter the trade, and improve service standards in the process. Mr Ho, the remisier society president, said that perhaps a S$10,000 deposit is enough; retirees, younger people, those without prior experience, and those with existing jobs can then be drawn to enter the industry, giving a wider choice to clients.

"The job will have more flexibility. You can go to the client's house," he said.

Newcomers can choose to be dealers instead, and execute trades for the house's clients.

"Remisiers generally don't like us to micro-manage them. If you want to manage risk more independently, then you have to put up more collateral," he said.

A senior broker who declined to be named said broking houses will still ask for S$30,000. If newcomers cannot even come up with that amount, then they might not bring a healthy level of business to the firm anyway, he said. "New blood will come in only if the margins are there, but margins are on the decline, and the product range is lousy for new people who want to come in and devote their career," he said.

The various changes are a culmination of the SGX's review of its rules, undertaken in 2015. The Business Times understands that the last time the regulator conducted a review of similar scale was back in 2004.

In the consultation paper, SGX also said it will no longer mandate senior management pre-approval on staff personal account trades, so long as measures are in place to guard against the misuse of confidential information.

Changes have been proposed to SGX's supervisory rules as well. One such change is a pre-emptive one: SGX is seeking the power to terminate the membership of any member which fails to pay its fees.

There have been cases of individual futures members who failed to do so, but continued to enjoy the privileges, SGX Regco's Mr Tan said.

Another change is in the aligning of SGX rules with coming changes to the Securities and Futures Act around the reporting of short-sell positions. Existing exchange practices on issues like error trades, trading practices and SGX investigations will also be formalised.

Ultimately, the changes do not mean the industry is allowed to take more risk, Mr Tan said. "We will continue supervising members ... It's just that we are giving them more flexibility to achieve their outcomes, avoiding a one-size-fits-all approach."

The public consultation on the rule changes is open till Nov 7.

China lifts yuan midpoint to strongest level in over 3 weeks

[SHANGHAI] China's central bank lifted its official yuan midpoint on Friday to the highest level in over three weeks...

Frozen housing market in US relies on bargains and desperation

[BOSTON] Jim Morris is on the hunt for a South Florida mansion, at a bargain price. He's got money to spend and few...

[SINGAPORE] Singapore has suspended the use of video-conferencing tool Zoom by teachers, its education ministry said...